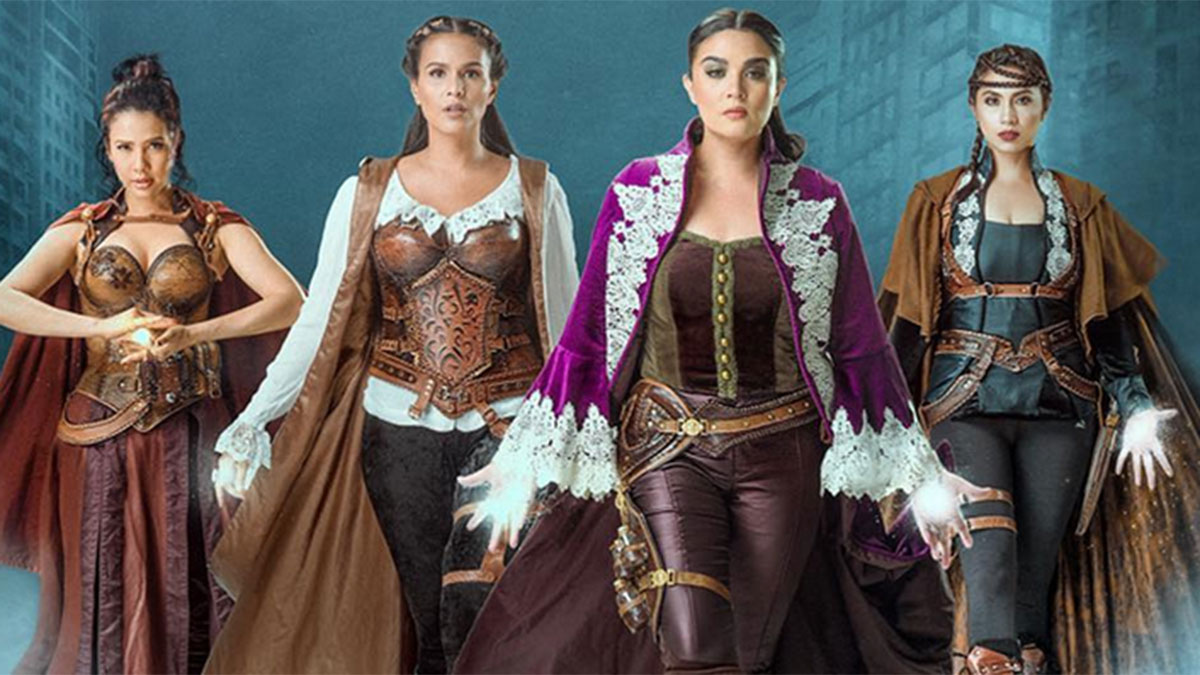 Sunshine Dizon cried when she and her Mystified co-stars first wore their costumes for their movie.

Mystified is the reunion project of Sunshine with her Encantadia sisters, Iza Calzado, Karylle, and Diana Zubiri.

Aside from taking the lead roles, they are also producing the project under their own company called Sang'gre Productions. Their co-producer is their Encantadia director, Mark Reyes.

In an exclusive interview with PEP.ph (Philippine Entertainment Portal) last February 25, Sunshine narrated how she became emotional during the taping day when they wore their costumes for Mystified.

Kaye is Karylle's nickname. Joy is Sunshine's nickname for Diana whose real name is Rosemarie Joy.

At present, Iza and Karylle are with ABS-CBN, while Sunshine is a contract artist of GMA-7.

Diana also stayed with ABS-CBN for while, but returned to GMA-7 in 2016 as a freelance actress.

This prompted Sunshine to reveal the back story regarding their reunion project. How did they avoid being embroiled in a network war between the two rival stations?

"Sabi niya kasi, there could be a possiblity na parang a company, all of us can do it na hindi tatamaan yung mga kontrata namin, so we waited. Parang after a year, it materialized.

"Direk Mark said, 'Oy, ito totoo na, iFlix wants to work with us. So, what are we gonna do?'

Mystified, which will be shown as a full-length movie on iFlix this March, is Sang'gre Productions's first project.

In this film, Sunshine, Iza, Karylle, and Diana play witches living a normal life in the mortal world.

Being an original concept of the team, they deliberately included some familiar elements from Encantadia.

Sunshine explained, "Siyempre, we also picked up on a little of the parang Sang'gre na history ng Encantadia.

"May konti siyempre, kasi ultimately, this is for the fans.

"Dahil ever since Encantadia, there has always been a clamor for, like a movie na kaming apat, pero hindi nga nangyari.

Sunshine then dropped some hints about the story of Mystified.

"But in real life, kasi after 300 years, we have to blend in with the commoners so anong trabaho naman namin. Ako, naging doctor ako, Iza is a teacher, Diana is an events specialist, Kaye naman is a blogger."

After Mystified, Sunshine divulged that future projects are already in store for Sang'gre Productions.

"Yes, there are a couple of projects lined up already. Basta maganda.

"There are these two projects na na in love yung isang company."

Direk Mark previously told PEP.ph that there are plans of doing a reunion project for his other phenomenal project, TGIS, starring Angelu de Leon, Bobby Andrews, among others.

He said back then, "It's... I don't know if it's gonna be a one-shot deal or a series for streaming."

Since Sunshine was also a part of TGIS, is there a possibility for Sang'gre Productions to produce this project?

She said with a smile, "Bakit hindi? If we have the money na!"

Sunshine pointed out that Sang'gre Productions can produce projects for any platform, including ABS-CBN and GMA-7.

"Sang'gre naman kasi is a neutral ground, so we can sell anywhere.


Read: How were Iza, Sunshine allowed to do reunion project while under contract with ABS-CBN, GMA-7?