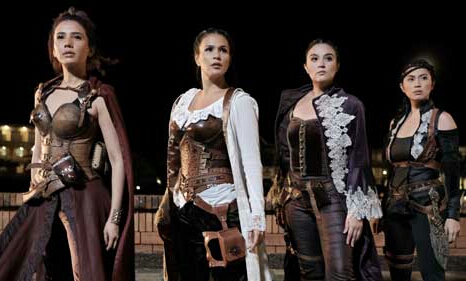 The plot of Mystified has nothing to do with the GMA-7 TV series although there is a common element that fuels both: magic.

Iza Calzado is Adela, a sorceress with the power to read minds, levitate, and of psychokinesis. Think Jean Grey of the X-Men. As a mortal, she works as a college professor.

Sunshine Dizon is Althea, an alchemist who heals with her magic potions. Her day job as a mortal is that of a physician.

Diana Zubiri is Kathalina, a sorceress disguised as a wedding planner. Her ability to control the weather lets her clients enjoy clear skies on their big day regardless of PAG-ASA's forecast of thunderstorms. Peg: Storm of the X-Men.

Karylle is Helena, who can teleport not only to destinations she visits as a vlogger, but to other dimensions as well.

Mystified comes on pretty strong right from the start. The first scene is already a turning point in the story that gets viewers pumped up immediately.

You'll hear narrators telling a brief back story, and you'll recognize the voices of the actresses starring in the film. You know there's no way they'd get bashed by foreign iFlix subscribers given how well they read the lines for the voiceovers.

You'll see the stars one by one wearing fancy period costumes tailored to the personalities of each of their respective characters which--if I may say so--they portrayed seamlessly throughout the film.

Althea/Thea (Sunshine) is the caring, nurturing one and this quality of hers turns out to be useful in her work as a doctor.

Kathalina/Kat (Diana) is the girl who wants first dibs on the monk from their fantasy world, and she never lets us forget this fact because she drops a hint or makes a move every chance she gets and daydreams about him when they're apart.

Adela/Addie (Iza) is the official heartthrob of the Coven of 4 and also the campus crush. Mortals can't help but fall for her and when a good catch comes along, she can't help herself either.

Helena/Ena (Karylle) seems shallow and self-centered and we later learn that it's intentional. She refuses to have emotional entanglements with mortals and the only connection she allows are the ones she establishes online as a vlogger. This character is the ray of sunshine among the four--she's just lovable even if she's supposed to be somewhat annoying.

Then there's the supporting cast, whose roles are integral to the plot. They are played by Dwight Gaston, Sunshine Cruz, and Ian Ignacio.

The pace of storytelling is quick and there's a lot of action right from the beginning, so you won't get bored.

You'll love the witty exchanges and comedic moments interwoven into the whole fantaserye mix. Every important character is given the chance to shine and do a mic drop either through memorable dialogue or adrenaline-pumping sequences. You'll also notice that the creative team put a lot of effort into making sure that the film would have the best CGI possible this side of the globe.

Really bad: Jinri Park belting out an awkward scream in a confrontational scene and totally ruining the moment. What on earth and in Encantadia was that? Oh, wait--was that supposed to be comic relief?

There are a few tiny loopholes in the story that result in the poor decision making of the characters; moments when you find yourself saying, "Why didn't she just do this, or that? It doesn't make sense!"

There are situations that seem unnatural in a real-life context. In one scene, Thea embraces her patient--a juvenile cancer patient--as the child is experiencing excruciating pain. The parents of the child, standing by the foot of the hospital bed, don't bother to hold their daughter or even stand by her side. Instead, they leave the room supposedly out of despair, and leave their daughter into the comforting arms of the doctor.

The movie has its share of dramatic scenes that can actually make you tear up for real, and at certain points the drama among friends lathers on too thick it gets sappy and you start wondering if "That's What Friends Are For" will begin playing any second. Quite understandable--the main target viewers are Encantadia fans and we all know how Pinoys love a good cry every now and then.

However, there are scenes that could have made a stronger impact--emotions wise--on viewers but fell short, and it's in the ones where some or all of the sorceresses are supposedly hanging on to their last breath. When heroes' lives are threatened, the normal reaction of viewers is to sympathize, feel alarmed, and sometimes, to even get carried away by the notion that someone close to them is really dying.

In Mystified, the torture of losing one's life force isn't as pronounced or compelling as we hoped it would be.

When you watch Mystified, you realize that this is what the producers are trying to do: serve world-class entertainment to an international audience while maintaining its appeal to mainstream Filipino viewers. This is by no means an easy feat because it's never easy to let go of tried and tested (but often passe and tacky) formulas and nuances that your target audience has grown accustomed to seeing in most local productions.

But Mystified pulls it off. And it's not just through the live action meets animation feel of the film or the spectacular costumes and set design. It brings a modern-day interpretation of women empowerment into a story about four strong women who modern women anywhere in the world can relate and look up to, even as the story is set in a Filipino context.

The movie successfully marries supernatural powers with human flaws within the characters. These are magical beings that we take seriously because they kick ass and they remind us of our favorite comic book superheroes.

While it's far from being perfect, Mystified is a big, brave step toward the possibility of making more made-for-streaming projects that will appeal to a global audience. It's engaging in many ways whether you're an Encantadia fan or not, and worth a sequel.

Mystified is now available for streaming via iFlix.