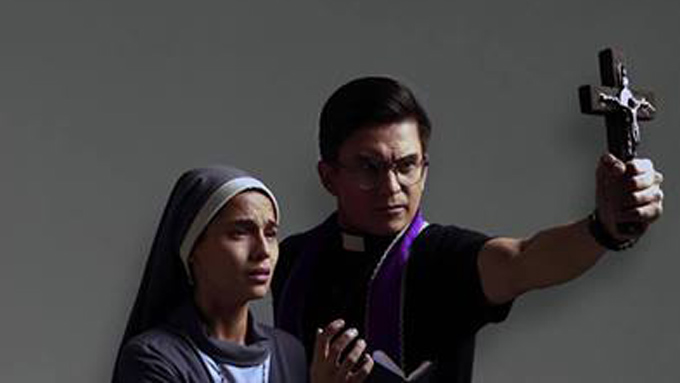 In Maledicto, Tom Rodriguez and Jasmine Curtis are members of the clergy who deal with exorcism and demonic possession.

Maledicto, which opens in cinemas on May 1, tackles the chilling and contentious topic of exorcism.

Lead character Father Xavi (Tom Rodriguez) is a Catholic priest trained both as a psychiatrist and an exorcist.

When his younger sister Mara (Inah de Belen) meets a tragic fate, Father Xavi turns critical of himself and skeptical of exorcism.

Meanwhile, cases of demonic possession are on the rise, and they are dealt with Father Jay Cinco (Franco Laurel), who, in turn, gets unwanted media attention for his work.

Cardinal Martinez (Menggie Cobarrubias) taps Father Xavi to look into the case of a sacristan named Frederico (Martin Escudero), who happens to be related to the high-ranking Church dignitary.

Complications arise as Cardinal Martinez and Federico get into a diabolical and deathly situation.

Archbishop Delfino (Eric Quizon) steps in, and warns the clergy about performing exorcisms.

He tells the priests to reject demonic possession and refocus their attention to the issue of rampant drug use. This way, he points out, the Church remains relevant in millennial times.

Meanwhile, the lethargic Father Xavi is convinced by Sister Barbara (Jasmine Curtis-Smith) to reconsider his stand on exorcism.

Sister Barbara, whom Father Xavi insists on calling Sister Barbie, believes that her student, Agnes (Miles Ocampo), has been possessed by evil spirits.

After undergoing a series of investigations but failing to secure a permission from his superiors, Father Xavi decides to perform exorcism on Agnes in the presence of Agnes’s parents (Nonie Buencamino and Shamaine Buencamino) and Sister Barbie.

The part where Agnes is led by a dog to the doorstep of the mysterious Manang Sisa (Liza Lorena) is a bit sketchy, though.

Good thing that Manang Sisa resurfaces as another character who has ties with Archbishop Delfino as well as with a group of powerful women led by Sister Stella (Nina Ricci Alagao).

This twist makes the plot thicken not for the movie but for the planned TV series to be shown on Fox Philippines.

The actors deliver an adequately committed and believable performances, with the consistently captivating Jasmine Curtis-Smith getting a lot of attention.