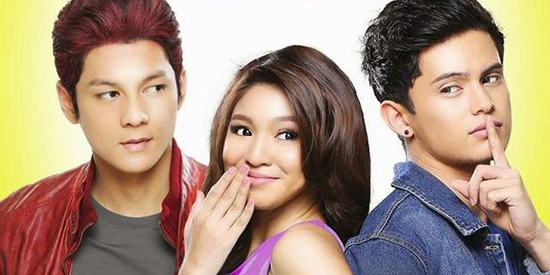 Talk Back and You’re Dead stars (L-R) Joseph Marco, Nadine Lustre, and James Reid. This teen romantic-comedy-action film tells the story of a bad boy falling in love with the perfect girl.

Talk Back and You’re Dead combines teenage angst with a fast-paced love story where the bad boy falls for the good girl and would do everything to keep her by his side, even if it kills him.

Based on the Wattpad story written by Alesana Marie, Talk Back and You’re Dead looks a lot like a live-action manga and manhwa (Japanese and Korean comic book) coming to life.

The whole concept then gets injected with more twists and turns: amnesia, family feuds and conflicts, running away from home, fixed marriage, and even sudden blindness.


Directed by Andoy Ranay, the movie has the tendency to give casual moviegoers more than they can chew, although fans of the book may easily recognize the scenes.

Talk Back and You’re Dead has a lot of unresolved conflicts, making first-time viewers hope to have their questions answered in the impending sequel teased at the end of the movie.

What happened to T.O.P.’s mother? Why is Mr. Pendleton against Sam and T.O.P.’s relationship after finding out that his son is dating someone from the Perez household? If T.O.P. was a “master of martial arts” why did he get beaten up by his enemy? And why and how did Sam even lose her memory?

Too much information is withheld that viewers may fail to empathize with the characters' cries, pleas, and sudden rage. Too many elements were poured into one single sitting, jumping from one scene to another, in hopes of telling the whole story while staying true to the book.

Maybe it was due to time restrictions that the film wasn’t able to thoroughly build up the character’s emotions, desires, and relationships. But still, it would have been best to cut down sequences to maximize the time limit and provide solutions to problems so that viewers will not be left hanging.

Despite its perplexing story, Talk Back and You’re Dead is still filled with a lot of kilig-worthy scenes.

Teens and young adults would melt for T.O.P.’s sleek yet cool outer appearance, yet caring and clumsy inner nature.

James Reid pulled off portraying a bad boy gangster role with a soft spot for the one he loves. He's a character who grows on you. Female viewers could be impressed by his suave English lines and captivating stares.

James not only showed off his sexy charm, but he willingly bared his upper body several times all throughout the film. The Pinoy Big Brother Teen Clash 2010 winner provided the female audience with enough eye-candy for one hour and fifty-five minutes to sustain their attention.

As for Nadine Lustre, she admitted that Sam Perez is a more challenging role compared to her character Eya in her previous movie, Diary ng Panget. Nadine confessed that she was just being herself when she portrayed Eya. But to portray Sam in TBYD, she had to watch the way she talks, walks, and even the way she stands.

Nadine's character Sam is supposed to be prim and proper. But after meeting T.O.P., the young girl is suddenly able to easily blurt out cheesy dialogues and entertaining pick-up lines that are honestly very amusing.

Dubbed as “JaDine” by their fans, the James-Nadine tandem was able to successfully veer away from their Diary ng Panget roles. The pair showed more “serious acting” compared to their Dairy ng Panget days. They cried, kissed passionately, and lost their tempers.

However, TBYD isn’t a hard-core drama and it has a tendency to limit one’s acting skills to keep up with the movie's "shoujo manga" (female comic book) tone.

Even though there are conflicts here and there, Talk Back and You’re Dead’s overall feel is just as laidback and carefree like in the comics.

The second male lead "Red" was portrayed by Pure Love actor Joseph Marco. He said that he is very happy to have accepted the role even if he had to endure coming to the shoot two hours earlier just to dye his hair bright red.

Joseph had little exposure during the first half of the movie. But when he does appear, you certainly couldn’t miss him because of his bright red hair. The revelation towards the end of the movie made his character more profound and essential that his presence could be felt even if he already dyed his hair back to black.

Joseph Marco was able to have his own fan base with Nadine Lustre. There are fans who are expecting their relationship to grow during the sequel, if it will push through.

Directed by Direk Andoy Ranay from a screenplay by Keiko Aquino, this teen romantic-comedy-action film is produced by Viva Films and Skylight Films.

Talk Back and You’re Dead may not be for everyone. Fans could be pleased with the kilig scenes, but others might leave the theaters puzzled and confused.

It’s best to remember that the story mostly revolves around colorful fantasies teens build in their heads: a high school romance starring the perfect schoolgirl falling in love with the best-looking boy as they continue living in a “you and me against the world” set-up.

Talk Back and You’re Dead is a teen flick meant for young teens and the teen at heart. It’s pure romance with unresolved sub-plots. It’s entertaining as long as you don’t look any deeper than the kilig and don’t expect more than the giddy feelings idealistic love can give.