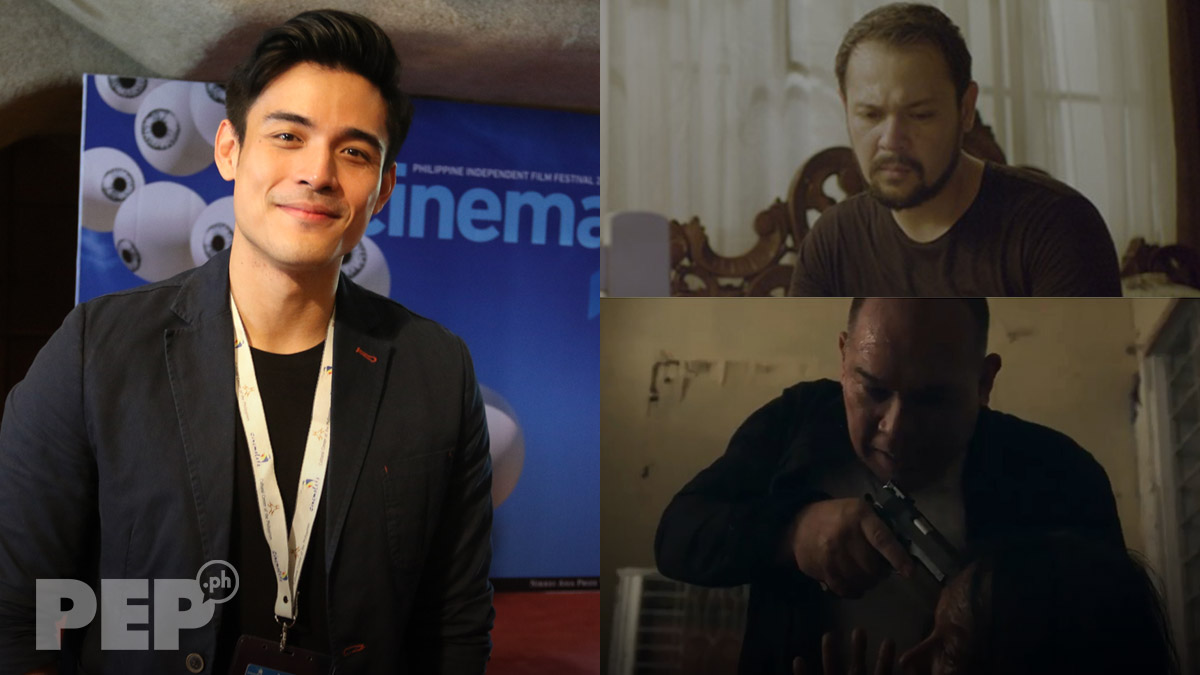 One of the biggest surprises in the 2019 Cinemalaya Philippine Independent Film Festival was the announcement of a full-length film entry by actor Xian Lim.

Yes, the ABS-CBN leading man is stepping behind the camera to direct a suspense slash horror thriller that he is not starring in.

Tabon follows the story of Ian (Christopher Roxas), a small town native who was sent to Manila when he was still a child. He grew up without his father (Menggie Cobarrubias), a well-respected faith healer in their community simply referred to as Amang.

Ian went on to live a normal life, got married, and raised a family. He, however, harbored a resentment towards his old man for sending him away.

One day, Ian got a call from his hometown’s chief inspector who told him that Amang was murdered and that three suspects were already in custody. Reluctant to go back and relive some of his painful childhood memories, Ian was convinced by his wife to reconsider since he stands to inherit whatever fortune is left to him.

That’s when things started to take a turn for the bizarre. Still living in their old house, the woman (aunt? nanny?) who raised Ian urged him to take everything that he can and leave as soon as they can.

The chief inspector detained the three suspects not in the precinct but in some kind of secret safehouse. All three professed innocence and have different versions of how Amang really died.

The screenplay, at least on paper, showed promise. A whodunit mystery as Lim prefers to call it in one of his interviews, Tabon delivers an adequate sense of curiosity and uncertainty as it presents many questions that audiences will want answered as the film goes along.

Who is Amang and why is he such a larger-than-life figure in their small town? Why did he send his son away? And why was he killed?

Obviously a big fan of horror films, it seems like the young filmmaker is influenced by the likes of Jordan Peele and to a certain extent, Darren Aronofsky and it shows in his atmospheric approach in Tabon. To his credit, Lim had the right idea of slowly peeling away the mystery involving Amang’s demise.

As for the cast, Christopher Roxas does an adequate job of essaying Ian’s indifference towards his late father. His wife, played by Ynna Asistio, is given her own climactic moment.

The supporting actors, however, are the ones that shine the most. Richard Manabat is effective as the hepe whose motives for investigating the murder are more suspect than his actual suspects. Dexter Doria deftly shifts from calm to hysterical as she begins to unravel.

While getting more highlights than necessary, the actors playing the three suspects (Leon Miguel, Benjie Felipe, and Lao Rodriguez) opted for varying approaches, with Rodriguez’s understated performance contrasting the over-the-top characterization of the other two.

Despite his minimal screen time and mostly as a corpse, it’s Menggie Cobarrubias who casts a large shadow as Amang. Perhaps also owing to the script, Amang’s presence dominates the film even when very little is seen of him and in his few scenes, Cobarrubias shows why the character is such an imposing presence in Tabon.

Not contented with the intriguing premise of the story he’s trying to tell, Xian embellished Tabon with head-scratching twists along with distracting, even downright cringeworthy special effects.

In his overzealousness to create an engaging, maybe even trippy, horror film, Xian has sprinkled Tabon with unnecessary flamboyance that detracts more than it entertains. It also tended to be more annoying than unsettling in certain scenes.

The interrogation scene of Benjie Felipe’s character, in particular, could do without the added comic balloon, blood and other special effects.

The creative decision to turn Ian into a son who doesn’t want anything to do with his father and to leave the small town as soon as he could made it all the more strange how he was still lured to find out how his Amang was killed.

Both the director Xian Lim and lead actor Christopher Roxas could have invested more in the character and added more reasons why Ian’s estranged relationship with his father is all the more painful with the latter’s demise. Like, does he have a memory of a time when they were close just before he was sent away?

There is an unsettling absence of townsfolk for most of the film, until the final act. Xian could have included more minor characters who could have added a sense of dread why everything and everyone are not what they seem in that small town.

The twist involving Ian’s wife and one of the supporting characters towards the climax could have also benefitted from a well-thought of build-up.

By all indications, Xian Lim has created Tabon with a specific audience in mind. It is certainly not for the average moviegoer who will probably need to see it more than once or maybe even repeatedly to totally figure it out.

As a filmmaker, Xian does show some promise even as he tried to overachieve and did not quite hit whatever he’s trying to aim for.

At the very least, Tabon did have an intriguing story going for it. Fans of the actor who expected something more linear and conventional, however, are likely to be disappointed.

As it is, the finished product feels more suited for genre-specific international film festivals.

We won’t be surprised if Tabon becomes accepted in say, at Portugal’s Fantasporto, a festival that gives space to fantasy, science fiction, and horror films.