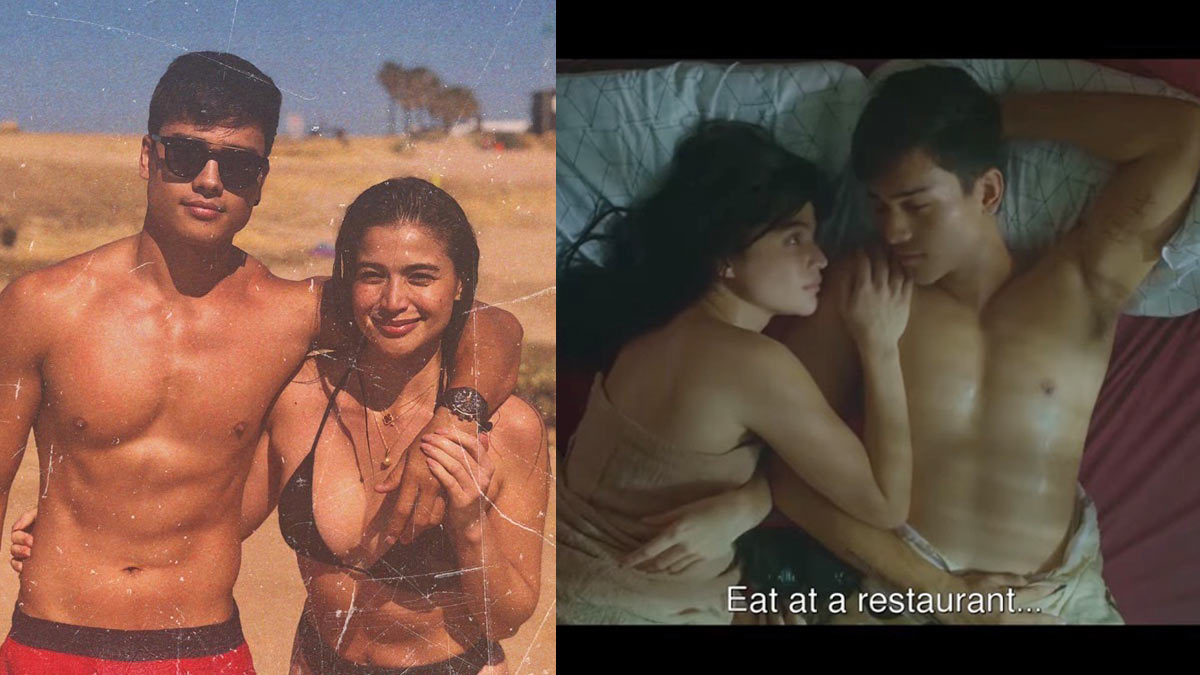 The characters of Anne Curtis and Marco Gumabao have steamy sex scenes in Just a Stranger, which is rated R-16.

In less than one month, we’ve now seen three Filipino movies about May-December affairs, Belle Douleur and Malamaya in the 2019 Cinemalaya festival and now, Just A Stranger from Viva Films.

Aside from its theme, one thing all three films have in common is that they involve an older woman in a relationship with a much younger man.

Directed by prolific filmmaker Jason Paul Laxamana, Just A Stranger follows the story of Mae (played by Anne Curtis), a beautiful woman married to Phil (Edu Manzano), an older man who is more concerned with his business than spending time with her.

While vacationing with friends in Lisbon, Portugal, Mae meets Jericho (Marco Gumabao), the handsome young son of a career diplomat (Robert Seña) who happens to be the Philippine ambassador in that country.

Jericho flirts with her at the beach. She calls him “Totoy” but just the same spends more time with him as he offered to be her personal tour guide. Their flirting ends up with them renting a room which she paid for.

Soon, their “one-time thing” as Mae would prefer to call it becomes a full-blown romance when they later meet again at the Old Railway Station museum in San Fernando, Pampanga where Jericho (fondly referred to by her parents as JekJek) is now apprenticing.

And while Phil treats Mae more like a trophy rather than someone he truly cares about, he is still concerned about his public reputation especially since he is depicted as a “rising star” in his industry. Although not without his own share of indiscretions, he is nonetheless not thrilled to learn about his wife’s affair.

Easily the best thing going for Just A Stranger is the chemistry between the two leads.

Audiences can feel sparks flying between Anne and Marco from the moment of their first encounter at the beach to their steamy love scenes right down to the moments their characters began to get to know each other better.

Despite her youthful appearance and the fact that she’s really “only” nine years older than Marco and not half her age as the film underscores, Anne does a good job of placing more emphasis on Mae’s circumstances as a bored and neglected wife whose needs go beyond the material things provided by her wealthy husband.

Dressed elegantly for much of the film, Anne delivers a mostly restrained performance that delineates her character’s maturity, which nicely complements her younger partner’s impulsive ways.

Laxamana provided a nice touch in depicting Mae as also suffering from the debilitating rheumatoid disorder fibromyalgia syndrome or FMS which provided more opportunities for her to get to know Jericho and realized that he is not just into her for the sex.

As Jericho, Marco is the real revelation here and not just because he is the third actor to expose his butt in a May-December story this August. It’s because he displays remarkable range and depth in essaying a character who has everything he needs except what he really wants.

Tormented not only by the fact that his family is grooming him to be the politician he despises, it also doesn’t help that he is in a doomed relationship with a married woman that well, for starters, he cannot make public.

Even when Mae was willing to risk giving up everything to be with him, Marco was terrific in showing how the burden of taking their romance to the next level weighed heavily on Jericho. Watch out for this kid. He’s destined for bigger things.

As Phil, Edu was amazing as an older man just as the late, great Eddie Garcia deftly played in his younger years. Calm and collected even when he’s obviously upset, Edu delivered the film’s most memorable line when Phil made it clear to his wife that while he can’t stop her from seeing her younger paramour, he certainly won’t allow her to finance her betrayal with his own money.

Like most films that involve illicit affairs, Just A Stranger falls prey to tried-and-tested clichés that include yes, the wealthy and increasingly powerful husband that Edu portrayed. The audience will get an inkling feeling that things are not likely going to end well for Mae and Jericho.

It was also somewhat of a dead giveaway that the film’s opening scene showed Mae wearing black and seemingly in mourning when she went to the church’s confessional.

It was also hard to believe that Mae did not leave her husband for good or at least sought an annulment when he cut her access to his wealth and credit cards that she is now reduced to selling her expensive clothes and accessories online.

During the final act, it was also strange that she was able to rent an expensive looking townhouse when she was previously seen renting a cheaper looking place during an earlier part of the movie.

It’s getting to be some kind of trend that when it comes to steamy love scenes, the men are the ones who expose more skin. Male butt exposures are getting to be commonplace on the big screen and we’re not sure if that’s a good thing.

Laxamana—being no stranger to May-December romances (Mercury is Mine) and doomed love stories (100 Tula Para Kay Stella, The Day After Valentine’s)—has been honed enough to deliver a very polished product with excellent production values, especially in the scenes set in Lisbon.

Despite its predictability and teleserye tendencies, Just A Stranger is a well-crafted film that—while far from offering a fresh take on either May-December romances or forbidden affairs—takes Anne Curtis to uncharted and exciting territory, something she could further explore in future projects.

For Marco Gumabao, it is definitely a starmaking vehicle that should take his career to the next level.

And for writer-director Jason Paul Laxamana, the film is yet another proof why he is one of the most sought after filmmakers in the country. He simply delivers.

Just a Stranger, which is rated R-16 by the Movie and Television Review and Classification Board, is currently being screened in cinemas.