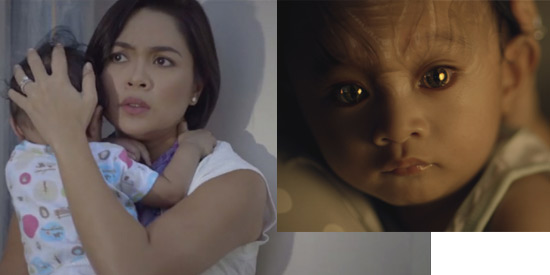 Judy Ann Santos, Solenn Heussaff, and Tom Rodriguez now topbill the modern-day remake that has been described by Direk Peque as a “love story between a mother and a monster.”

Cast members of the original film (titled Tiyanak), Janice de Belen and Lotlot de Leon, even make a brief appearance in this 2014 reboot.

Currently being screened exclusively in SM cinemas, T’yanak features Judy Ann as Julie, the woman who cares deeply for the “demon-baby.” Solenn and Tom are cast as Maddie and Mark, a couple about to get married.

T’yanak revolves around Julie, a childless woman who desperately wants to be a mother. She is the polar opposite of her soon-to-be sister-in-law Maddie.

Whereas Julie would do everything to have a child of her own, Maddie thinks it’s more “practical” to not have any kids after her marriage to Mark (who is the adopted brother of Julie).

Julie's prayers are get answered when Maddie brings home a lost child after witnessing the aftermath of a gruesome murder.

However, the unlikely situation does not sit well with Julie's grandmother (played by Liza Lorena), as she believes that the child is more of a curse than a blessing.

Following rampant killings and other peculiar happenings surrounding the town, people also begin to question the true identity of the child, now called Angelo, even going as far as to name him the murderer.

Still driven by her ultimate goal to be a “real mother” to a “real child,” Julie also threatens to kill anyone who wishes to harm Angelo, just to preserve the life of her newfound son.

Judy Ann gives an exceptional portrayal of the iconic character. Showing off her acting prowess, the actress knows by heart what Julie wants: a child.

Her frustrations after several miscarriages led Julie to singlemindly base her decisions on blind obsession. It is worth seeing her character’s emotional journey as she eventually comes to terms with the fact that her dream of being a mother cannot be fulfilled.

As for Solenn, she showed off her “cowboy” side as she unleashed her inner Lara Croft by brandishing a gun while shooting scenes in dark caves and muddy forests.

Solenn’s chemistry with Tom Rodriguez is also filled with potential. The “mukhang sosyal” yet “walang arte” tandem gives something fresh to the table.

Despite being a horror film, T’yanak targets the viewer’s feelings more than engaging them to scream and close their eyes.

In fact, T’yanak remake shows not only the melodramatic side of the horror movie but also gives it a comedic touch through the character of Sid Lucero.

Sid portrays a pivotal and essential character in the film. He’s like the movie’s emotional roulette: he lightens up the mood with his unintentional yet funny antics, but he also provides depth as he is full of hatred while seeking to avenge the death of his wife, Nelya (played by Chanel Latorre).

The T'yanak lures its victims by transforming into a baby and crying helplessly until someone saves him.

The wonderkid who played the T'yanak in the film should be commended for his expressive eyes “na para bang nangungusap.”

Through the unconventional framing and skilled camerawork, the kid's emotions stood out--conveying pain, despair, and even love to the audience.

With different elements combined, T'yanak may not be the usual horror-thriller that will make you jump out of your seats, but the solid storyline coupled with superb acting is enough to make you stay put till the end.


T'yanak is graded A by the Cinema Evaluation Board.

It is one of the four entries of the Sineng Pambansa Horror plus Film Festival organized by the Film Development Council of the Philippines.

The other entries are Hukluban by director Gil Portes, Bacao by director Edgardo Vinarao, and Sigaw sa Hatinggabi by director Romy Suzara.

(To learn more about this year’s entries, CLICK HERE)