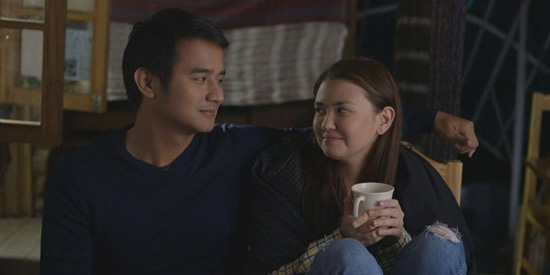 The John Lloyd Cruz connection is milked throughout the Cinema One Originals entry That Thing Called Tadhana. This movie about moving on is topbilled by comebacking actor JM de Guzman and John Lloyd's girlfriend Angelica Panganiban.

Observing the reactions of the weekday afternoon audience that watched That Thing Called Tadhana, I can already see it enjoying a long regular cinema run. All the elements are there: a good-looking couple, kilig moments, and funny lines—the eternal romantic Pinoy public will lap it up.

It is as close a Filipino version as we’ve ever seen to Richard Linklater’s Before Sunrise starring Ethan Hawke and Julie Delpy.

Mace meets Anthony at the airport in Rome. She is trying to observe the airline baggage allowance but, as all travellers are likely to do, has much too much excess baggage. Anthony comes to his fellow Pinoy’s aide, because he, of course, has packed a very small, light bag.

Clearly, the excess baggage is a metaphor that continues throughout the film—Mace’s difficulty to move on from a failed relationship.

The story structure can somehow be divided according to their location. They meet in Rome, but the depth of Mace’s heartbreak is revealed during the flight home, when she cries over the movie One More Chance starring John Lloyd Cruz and Bea Alonzo. The inside joke is not lost on the audience, and the John Lloyd connection is milked throughout the movie.

At one point, Mace even says that her ex looks like John Lloyd; Anthony asks to see a picture, and upon examining it, refutes her delusion.

Even Angelica's other ex-boyfriend, Derek Ramsay, is mentioned very briefly in the movie.

JM, who spent several months in drug rehabilitation, is not spared from this kind of treatment. He casually utters the line: "Nagda-drugs ka ba? Pahingi nga!"

In Manila, the leads get to know each other a little better. They become so at ease with each other that, upon Mace’s invitation, Anthony goes at the spur of the moment to Baguio with her. On the bus ride there, they watch Don’t Give Up On Us, the Judy Ann Santos-Piolo Pascual starrer that was filmed in Baguio and Sagada.

In Baguio, more is revealed about Anthony while Mace still wallows in her broken heartedness.

The final act starts in Sagada, as Mount Kiltepan gives Mace a place for unloading her frustrations and many kilig moments ensue between the two. 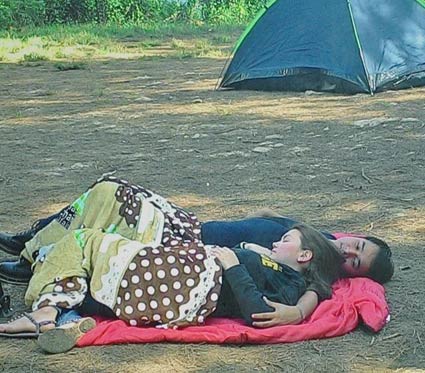 The movie avoids the overly melodramatic scenes and loud confrontation scenes that have long been the norm in dramatic movies. It also avoids being just a Filipinized version of all the nice foreign rom-coms that have come our way. The acting is natural, the situations not forced. The ending, provocative then smart.

The range of emotions covered by the entire length of the song “Where Do Broken Hearts Go?” as they sing in the videoke bar is engaging. It is a great testament to the acting talents of Angelica and JM, of the cinematographer, editor, and of course, director Antoinette Jadaone, who put it all together.

There are many other scenes between the two that testify to their onscreen chemistry. Let’s face it, these two have awesome chemistry. Every glance and smile is loaded with meaning, much more than clever lines. Not that the lines are not good either. Their banter is fluid but natural.

Angelica plays the “babaeng sawi” role very well. It is not a surprise that her voice delivers lines clearly even as her eyes well up and her face reddens with pain. She is equally at home delivering witty lines and bouncing them off JM de Guzman.

JM is just the right amount of boy next door to be easy on the eyes but also be treated by Angelica’s character as a buddy. He is also able to pull off the brooding-artist persona without sinking into the mire of being too sulky or brooding like a cliché. He, too, is able to play off Angelica with a nice balance of concern and slowly-increasing attraction.

An interesting device that director Antoinette Jadaone uses is the cartoon, based on a short story titled “The Arrow With The Heart Pierced Through It.” It serves as the movie’s prologue and does not reappear until Act III of the film, but when it does, it does not feel stilted or forced. It is another clever metaphor for the story and the characters.

Honestly, being an adopted daughter of Baguio and Sagada, I can’t fault the movie except for one inaccuracy about the direction of the bus on one road in Sagada. Negligible.

Full disclosure? I did not, not once, check my watch for the time during the entire screening. I have imagined writing a screenplay with some of the elements that were used in the movie.

For its being Pinoy without being too Pinoy (aka melodrama), I think many people will flock to the cinema to watch the JM de Guzman-Angelica Panganiban starrer That Thing Called Tadhana.

This film is one of the entries competing in the 10th Cinema One Originals film festival ongoing until November 18 at Trinoma, Glorietta 4, Fairview Terraces, and Greenhills.