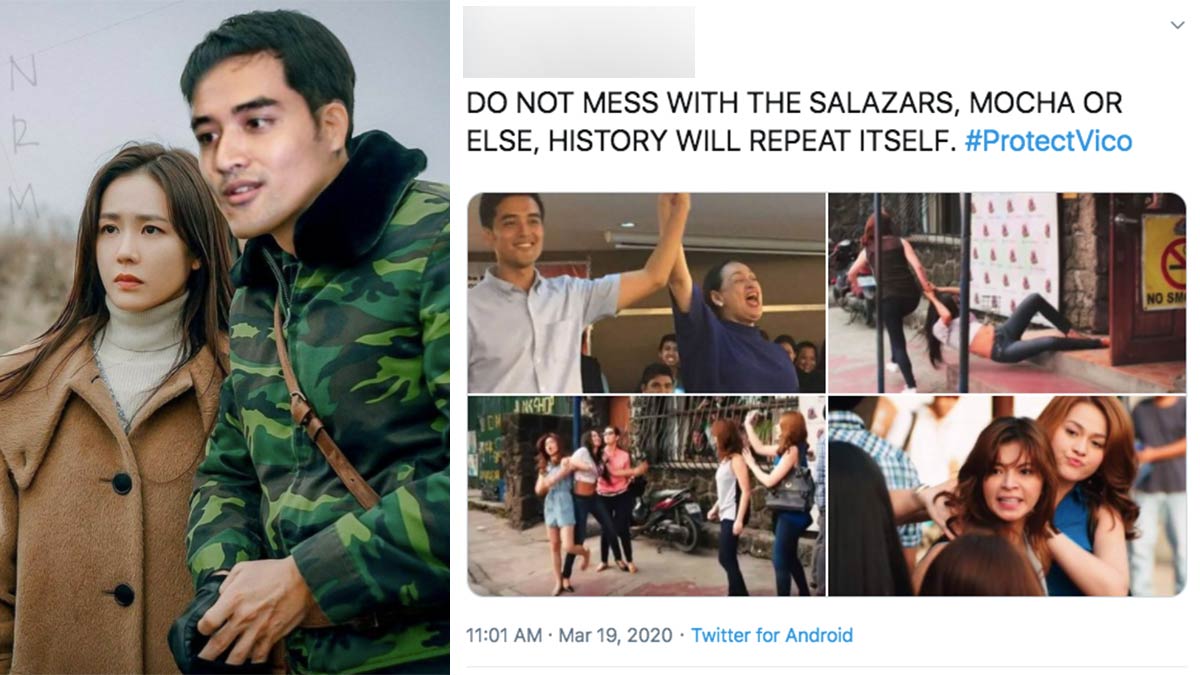 His efforts to protect his city from COVID-19 have not gone unnoticed. In fact, they've earned him followers and admirers who've come up with hilarious memes and also created fan art for Vico!

The hashtag #ProtectVico trended on Twitter after vlogger Mocha Uson reposted a tweet of a netizen slamming Vico and calling him "pabebe."

Thereafter, netizens reposted clips, photos, and GIFs of the 2013 movie Four Sisters and a Wedding that features Mocha and Vico's mother, Coney Reyes.

In the movie, Coney is cast as the mother of the Salazar siblings, played by Toni Gonzaga, Bea Alonzo, Angel Locsin, Shaina Magdayao, and Enchong Dee.

In one scene, Angel Locsin's character Alex is shocked to see her boyfriend, Chad, (played by Bernard Palanca), kissing another woman at a restobar.

It turns out that the woman is named Mocha (played by Mocha).

As a result, Alex drags Mocha by her hair out of the restobar.

Alex's sisters Teddie (Toni) and Gabbie (Shaina) then hold Mocha's arms to keep her from escaping.

One netizen quips, "Let’s remind Mocha Uson that this happened to her the last time she messed with Coney Reyes’ children. ’Wag si Mayor Vico Sotto."

Another netizen writes, "DO NOT MESS WITH THE SALAZARS, MOCHA OR ELSE, HISTORY WILL REPEAT ITSELF. #ProtectVico"

A netizen even describes this scene as the "best gif ever."

VICO SOTTO AND THE VIVICOS

Netizens who are fans of Korean pop culture have now dubbed themselves the "ViVico."

A netizen has created a fan profile of Vico that is similar to fan profiles made for Korean superstars.

Someone has gone the extra mile and did a graphic art of Vico's possible fan merchandise, including his own "bong," the lightstick used by Korean fandom.

This netizen also seems to be a fan of the Netflix series Crash Landing On You. She has posted a photo with the face of Vico superimposed on the face of CLOY's lead character, Captain Ri (Hyun Bin).

She writes, "Our Captain Vico!"

And speaking of Hyun Bin, one Vico stan says: "Hyun Bin who? Sorry but sariling atin muna. I only know Vico Sotto! Moty of the year! #Vivico"

Stan is another term for fan, while "Moty" is acronym for Man of the Year.

Well, do you think Vico can star in his own Netflix series?

One netizen suggests that the title could be: Ikaw Pa Rin ang Vivico (You're Still My VieVie)!

A netizen also pitches another Netflix series starring Vico that could be titled Pasig.

This whole thread tells a fictional story of Vico as a K-pop superstar:

Other netizens have edited their own fancams of Vico.

A fancam is defined as video footage of a celebrity taken by a fan.

One of those edited fancams shows Vico dancing with his siblings Paulina and Danica Sotto, which aired in Eat Bulaga!

Another netizen, who is also a BTS fan, has edited Vico's photo and inserted it into one of BTS' group shots!

BTS is a Korean all-male group very popular in the Philippines.

Check out the video for Vico's answer: