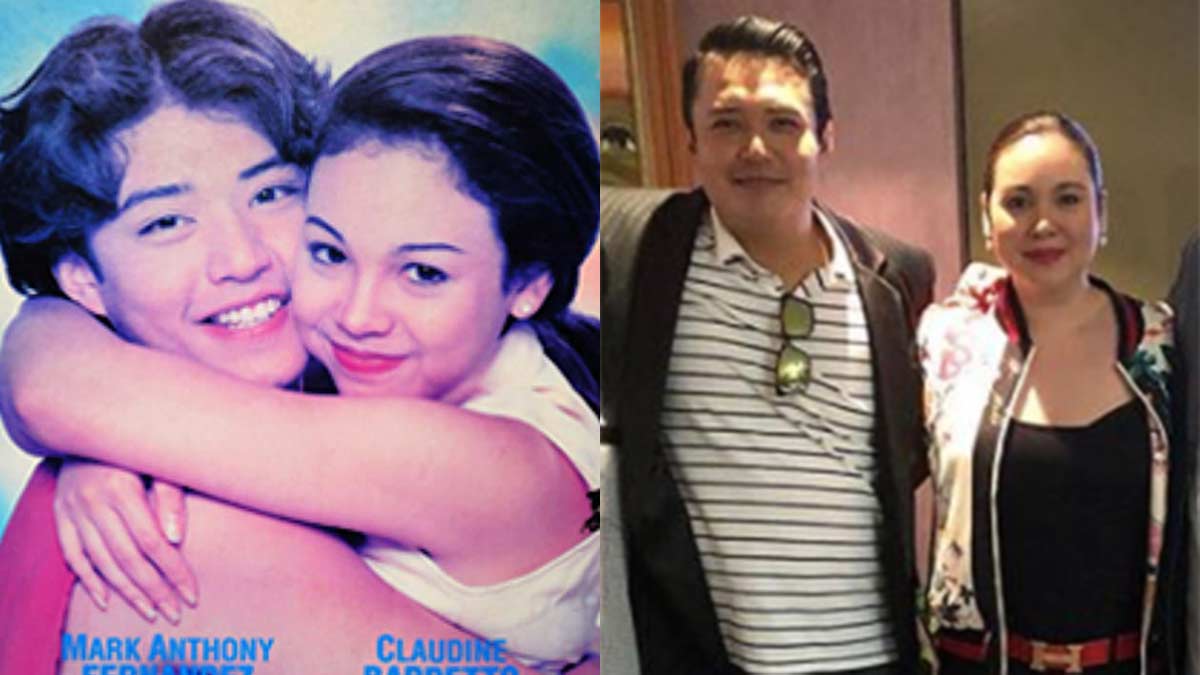 What happened to the reunion projects that ex-sweethearts Mark Anthony Fernandez and Claudine Barretto were supposed to top-bill?
PHOTO/S: Star Cinema / @claubarretto on Instagram

Back then, they were two of the most exciting, rising teen stars.

Their surnames were already well known to showbiz fans—after all, Mark Anthony is the son of action superstar Rudy Fernandez and actress Alma Moreno; and Claudine is the youngest sister of '90s screen goddess Gretchen Barretto.

The two young teens looked good together. And, what's more, they both could act.

So why is it that their real-life romance did not make them showbiz's phenomenal love team?

We start from the beginning.

Claudine and Mark Anthony worked together in the sitcom Palibhasa Lalake, which aired from 1987 to 1998.

On the side, Claudine did other projects, and was paired with Jao Mapa and Jomari Yllana.

But in 1996, ABS-CBN decided to test the chemistry between Claudine and another possible onscreen partner, Rico Yan.

During this time, Mark Anthony and Claudine were still an item in real life.

In 1997, ABS-CBN launched Claudine as its homegrown drama princess via the teleserye Mula sa Puso.

Claudine had two leading men in the series: Rico Yan and Diether Ocampo.

The series was a top rater and ran for two years on ABS-CBN’s prime-time block.

Mark Anthony, for his part, starred in the movies Kabilin-bilinan ng Lola and Istokwa.

But did you know that Mark Anthony was supposed to be part of Mula sa Puso?

He revealed this in an interview in 2009. According to him, he was removed from the project, and was replaced by another actor.

He did not reveal the reason for this or the character he was supposed to play.

Mark Anthony and Claudine broke up in 1998. Claudine would be an item with Rico Yan, although the exact year has yet to be made clear.

Mark would take a break from showbiz; Claudine would go on to become one of ABS-CBN’s drama queens, along with Judy Ann Santos, Jolina Magdangal, and Kristine Hermosa.

When Mark Anthony resumed his television career in 2001, he signed up with GMA-7, while Claudine remained a contract star of ABS-CBN.

In 2009, Claudine left ABS-CBN and the network's talent-management arm, Star Magic, and transferred to GMA-7.

By this time, Mark Anthony had become a reliable Kapuso leading man, and was paired with Sunshine Dizon (Impostora and All About Eve), Heart Evangelista (Luna Mystika), and Regine Velasquez (Ako Si Kim Sam Soon). He also became one of Marian Rivera's love interests in Darna.

VIVA and GMA-7 then planned a reunion movie for them.

Claudine said in an interview that the project would serve as a "closure" for them because they never had a formal breakup.

But when they finally appeared together in public, in August 2010, Claudine and Mark Anthony did so only as guests of the talk show Showbiz Central.

And it was to promote their reunion project for a drama show, which was the final episode of Claudine’s self-titled drama anthology on GMA-7.

It took another year before talk about their reunion movie surfaced.

This time, Claudine already had a few details to tell at the press conference for her teleserye, Iglot, in August 2011.

She said that the movie would be produced by VIVA Films and Dondon Monteverde’s Reality Entertainment.

“Of course, it's drama, na love story na may pagka-suspense-thriller.”

After the interview, nothing more was heard about the project.

In November 2011, the month that the Mark Anthony-Claudine movie was supposed to start shooting, Claudine’s GMA-7 drama Iglot ended.

Reports said the show was cut short because Claudine was undergoing personal problems.

What was not clear was whether the abrupt end of Iglot also had something to do with the cancellation of the Claudine-Mark Anthony reunion movie.

In 2018, seven years after the first anticipated reunion project, Claudine and Mark Anthony met again. This happened at the office of the VIVA Artists Agency, which was now managing the two.

At the time, Mark Anthony had just returned to showbiz, after getting out of the Angeles City Jail in December 2017. He was arrested in October 2016 in Pampanga for illegal possession of one kilo of marijuana.

At the time, Claudine was staging her own movie comeback, after a series of personal problems that had landed her in the tabloids and television.

However, Claudine's post did not mention if there was a reunion project with Mark Anthony in the offing.

Months later, in May 2018, Claudine met with director Sigrid Andrea Bernardo for a possible movie project. Mark Anthony was not present at the meeting.

Nothing came of this.

Later, reports said that the project was the film Untrue, which was to be top-billed by Claudine and Mark Anthony.

Their roles went to Cristine Reyes and Xian Lim.

Mark Anthony focused on his appearance in FPJ’s Ang Probinsyano.

He also made a big-screen comeback via the 2019 Metro Manila Film Festival entry, Miracle in Cell No. 7, as a prison inmate.

Meanwhile, Claudine was seen in 2019 in only one TV appearance, in the April 27 episode of Maalaala Mo Kaya.

UPDATE ABOUT CLAUDINE AND MARK ANTHONY

In a recent interview with PEP.ph (Philippine Entertainment Portal), Mark Anthony was asked if he was still in touch with his former girlfriend Claudine.

The story behind the "tampuhan" is another one that deserves a telling, maybe some day.