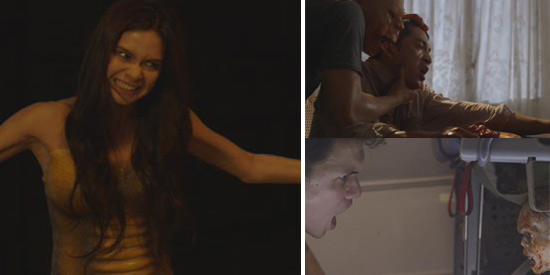 Mere jump scares and gore do not make a good horror movie. The best horror flicks use a mix of story and atmosphere to create a sense of dread that lasts until the viewer is out of the cinema.

Case in point: Ulam, the second segment in Shake, Rattle and Roll XV, the newest entry of Regal’s horror franchise for the 2014 Metro Manila Film Festival.

Ulam tells the story of Henry (Dennis Trillo) and Emmy (Carla Abellana), a married couple who moves with their young daughter to their deceased grandmother’s ancestral house, now maintained by an old maid Linda (Chanda Romero).

Emmy is hesitant to settle in, recalling that Henry’s relatives do not approve of their marriage. Her hesitations are later on proven true when her family gets mired in a deadly revenge plot.

The segment is executed brilliantly. The story is told slowly to keep viewers intrigued, building an atmosphere that bleeds from the screen to the whole theater.

Kudos should go to Jerrold Tarog, Ulam’s director. The multi-awarded indie director also directed Punerarya from SRR 12, which this reviewer called the “best local horror film” in 2010. (I would say the same of Ulam for 2014.)

And like in Punerarya, Carla Abellana’s performance in Ulam should be commended with a best actress nomination. Dennis Trillo should get a citation, too.

The other two segments are not as outstanding.

The first segment is Ahas, directed by Dondon Santos. Ahas retells the local urban legend about a snake woman who lives inside a mall and eats female shoppers.

The segment is remarkable for putting the 1980s myth to the big screen. The country has an abundance of creepy stories that are said to be true-to-life, and it would be a nice to see them turned into movies.

But Ahas’s retelling is a bit of a head-scratcher, even employing a twist that’s too obvious for seasoned horror fans. The story switches its focus too much that it feels clunky and uneven.

Erich Gonzales takes the role of Sandra Alegria, heir to a popular mall, and her twin snake Sarah. Her performance is adequate and could be affecting at times, but there’s not much difference between her portrayal of Sandra and Sarah.

The final segment is Flight 666, directed by Perci Intalan. It tells the story of a tiyanak that goes on a murder spree inside a commercial airplane.

This is the worst segment. Mostly to blame is the bad casting, which is filled with comedians who are known for one-note portrayals. For instance, Kuya Kim’s schtick is reciting a fact at the drop of a hat. It gets annoying, moreso once the tension is rising and the deaths are racking up.

Moreover, the credible actors are underused. Award-winning actress Sue Prado is onscreen for less than five minutes, while good-looking model John Spainhour is given a much longer exposure even if he can’t act at all.

Lead actors Matteo Guidicelli and Lovi Poe’s characterizations are also so paper-thin that they look bored most of the time.

The real star of SRR 15 is John “Sweet” Lapus as Iggy Moda, an unfortunate character who is present in all the three segments. John is a credible actor, and he gets to flex his acting chops to fit the style of each segment.

All-in-all, SRR XV is a mixed experience. Ulam is brilliant, Ahas is serviceable, and Flight 666 can be skipped.


Shake, Rattle and Roll XV is one of the 8 official entries to the 40th Metro Manila Film Festival.