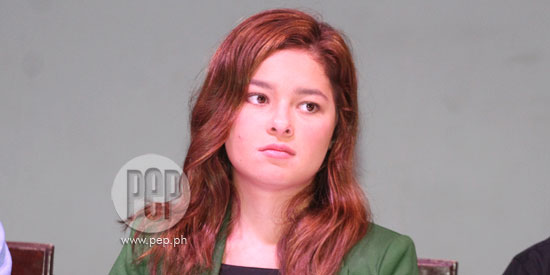 Andi Eigenmann couldn’t help but link her freak accident on the set of Tragic Theater to the scene where she’s supposed to exorcise the evil spirits in the place.

Last October, the actress fell when her harness snapped while she was hanging fifteen feet off the ground.

Apparently, the accident occurred just when Andi was rehearsing an exorcism spell in Latin.

“So I was just throwing lines with Kuya John [Estrada] habang inaangat, as in umaangat pa lang.

To this day, Andi refused to speak out loud the exact Latin words that she uttered in that scene for fear that it might bring her bad luck once more.

When asked about the Tagalog translation of an excerpt from that exorcism spell, Andi replied, “Parang something like, ‘Ang kukulit ni’yo!’ Yun ang translation ng sinabi ko.”

Director Tikoy Aguiluz, for his part, claimed that Andi’s freak accident still gives him the creeps every time he remembers it.

“Yun ang most horrifying experience in my life.

Tragic Theater is based on the book of the same title written by Gilbert Colonel. The horror suspense movie also stars John Estrada and Christopher De Leon as members of the clergy.

It depicts how a group of spirit questors attempted to exorcise evil spirits at the supposedly haunted Manila Film Center in Pasay City back in 1999.

Given that the story is based on a true-to-life tragedy and exorcism, Direk Tikoy admitted that he was really spooked by what happened to Andi.