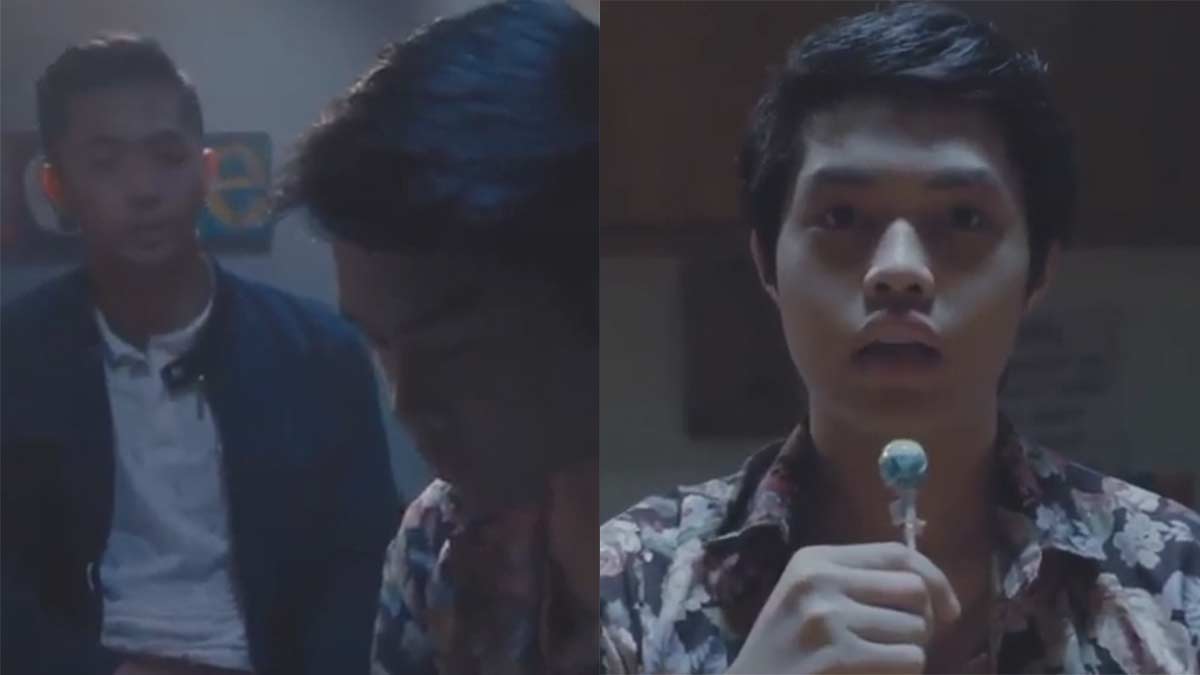 The scenes are from the movie He Who Is Without Sin, directed by Jason Paul Laxamana.

He Who Is Without Sin was originally a Sinag Maynila Independent Film Festival entry this 2020, and was recently shown in the Pista ng Pelikulang Pilipino 4.

Because of the pandemic, PPP4 and Sinag Maynila decided to forge a tie-up, allowing the film to be shown in PPP4’s Premium Selection as PPP4 held its festival online.

Here is the official synopsis of the movie based on PPP4’s website:

“He Who Is Without Sin stars Elijah Canlas as Martin, a young broadcast journalism student who happens to meet Lawrence (played by Enzo Pineda), a well-known TV reporter whom he idolizes.

“Martin encounters Lawrence while the reporter is doing a story on UFO appearances and interviewing people on the street. The pair meet again later at a coffee shop and it is here where the story begins. The events that unfold during and after this coffee shop meeting begin to appear in various contradicting ways as Martin recounts them to different acquaintances.

“What emerges from his retellings become a matter of psychological significance, as dark truths about an apparently positive experience unfold one after the other."

Netizens on Twitter have been reposting clips of Enzo and Elijah’s scenes.

Lawrence then showed his pubic hair to Martin after taking a pee and asked him to look at it.

There was also a sensual scene where Enzo and Elijah were making out outside a bar.

This got some netizens into a tweeting and retweeting frenzy.

Even comedian Macoy Dubs could not help but write that he will buy Enzo a shaver at the 12.12 Christmas sale.

A few opted to do a quick review.

A netizen also called out those who are selling and distributing illegal copies of the film.

He Who is Without Sin won four awards in the recent PP4 Awards Night, including Best Screenplay, Best Cinematography, Audience Choice Award for Full Feature Film, and a Special Jury Award for Elijah’s performance in the movie.

Elijah wrote in his tweet, “Thank you to the FDCP and Pista ng Pelikulang Pilipino for the awards you've given me and the team of HE WHO IS WITHOUT SIN! And thank you once again to all who watched our film and continued the conversation about abuse and its profound impact on its victims.”