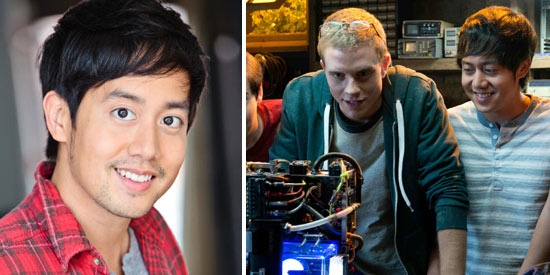 If you look closely at the trailer of the movie Project Almanac, you will see a guy facing the camera and declaring, “I love time travel.”

That guy is actually Allen Evangelista, a Filipino-American actor who was born to Pinoy parents. His mother hails from Pampanga while his father is from Manila.

For five years, he was part of the Hollywood show The Secret Life of the American Teenager. He also has a recurring role on Fox’s Brooklyn Nine-Nine.

PEP.ph (Philippine Entertainment Portal) had the chance to interview the Los Angeles-based actor to talk about his latest sci-fi movie, Project Almanac.

Produced by Michael Bay (of Transformers fame) and directed by Dean Israelite, Project Almanac is a teen thriller about a group of high school students who build a time-travel machine that inadvertently puts their lives in danger.

Allen takes pride in being the only Fil-American actor in this Hollywood movie that is slated to open in Philippine cinemas by February 4.

“Whenever I see another Filipino doing something in this business, it never feels like competition,” Allen says about other Pinoys excelling abroad.


Here are excerpts of PEP’s interview with Allen:

1. Have you ever been to the Philippines? When was your last visit and what memories do you have about the place?

I’ve only been there once, sadly. I believe I was about 7 years old. I don’t remember much, but I remember we were in a more rural area, and it was the first time I’ve ever been fishing.

2. What stories have they told you about the Philippines? What Pinoy traits or habits have you adopted?

That there are A LOT of pretty girls there. As far as Pinoy traits, I feel like I’m a decent basketball player, and have a decent singing voice, which I’m thankful for both. I’m also definitely thankful for the food! My mom’s adobo is amazing. I grew up eating Filipino food so I know it all.

3. How hard was it for you to penetrate Hollywood? How did you deal with rejection in the past?

I got really lucky. I booked the first 3 auditions I went on, which is a rarity. That helped my parents become even more supportive. Rejection is just part of the business. I look at it this way, every no is one step closer to a yes.

4. How did you get involved with Project Almanac? What do you think made you clinch the role?

I went through a long audition process. It went on for 6 months, as they were casting all over the U.S. What clinched me the role is probably a combination of my hard work, and luck. I portrayed the role how I saw fit and, luckily for me, it seemed to match their expectations.

5. How does it feel like being the only Fil-American in this Hollywood movie?

I take a lot of pride in that, because there’s not that many of us out here. Whenever I see another Filipino doing something in this business, it never feels like competition. I feel it’s more like camaraderie. It’s definitely an honor, and privilege to be a part of something this big, and I’m extremely grateful.

6. What's the name of your character and how would you describe him?

My character’s name is Adam. He is one of the smartest, if not THE smartest, in the group. He’s great with computers which definitely helps when building a time machine. He is also the most cautious and logical thinker. He does get to have fun with the machine, but he’s more about making sure anything we do doesn’t cause any damages to the time-line.

7. What was the most challenging scene that you had to do in the movie?

There’s a scene Adam has with David, played by Jonny Weston, which gets pretty intense. This scene was added months later, after we had wrapped principal photography. So it’s now winter in Atlanta, Georgia, but our characters have to dress like its summer time to make it make sense in the movie. Twenty degrees Fahrenheit, in shorts and a t-shirt, made the scene extremely difficult. But it turned out great, thankfully.

8. Who would you consider as your closest friend among the cast members? How do you bond off screen?

I probably talk to Sam Lerner the most, but we all got a long really well. We still find time to hang out once in a while, grabbing dinner and drinks. I got really lucky with this cast. The chemistry was great, and I feel it really shows in the movie.

The best word would be, comforting. Michael was a producer on this film, and there is no denying his talent for getting people into the theater. Whenever we saw him he was so gracious, and made us comfortable. Plus, he’s pretty good with special effects.

10. What pointers would you give to other Filipino actors aspiring to penetrate Hollywood?

If this is what you REALLY want to do, then work hard and develop thick skin, because there’s a lot of rejection in this business. Still, if you love something, it’s never really considered work.

11. Do you have plans of visiting the Philippines? What places would you want to visit?

None as of yet. This movie release has kept me really busy. But I definitely want to go to Manila, and Boracay.

12. How are you exposing your son to Pinoy culture?

Right now he’s 3 years old, so it’s hard to keep his attention on anything. But he knows some Tagalog words already, mostly from my parents. He also loves pancit!