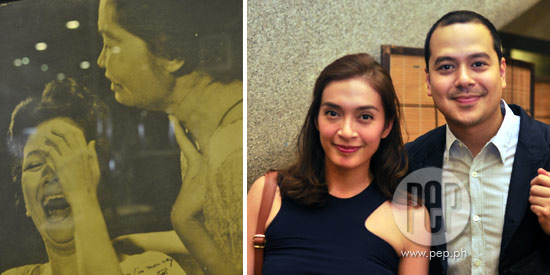 John Lloyd Cruz and Ina Feleo (right frame) graced the screening of A Portrait of an Artist as Filipino last Saturday, April 25. The classic 1965 film has recently been restored. It revolves around two spinsters—Candida Marasigan (played by Daisy Avellana) and her sister Paula (played by Natividad “Naty” Crame-Rogers)—dealing with family problems during World War II.

The restored 1965 film, A Portrait of the Artist as Filipino, premiered at the Cultural Center of the Philippines last April 25, 2015--exactly fifty years after its original showing.

It was first shown five decades ago at the Rizal Theatre in Makati (the place where Shangri-la Hotel now stands).

The event also marked the birthday centennial (February 12, 2015) of the film’s director and the country’s first National Artist for Film Lamberto Avellana. It also commemorated his 24th death anniversary, which remarkably coincided with the date of the film’s original screening.

The film, A Portrait of the Artist as Filipino, is based on the literary play of the same name written in English by National Artist for Literature Nick Joaquin.

Originally a four-hour play, it was edited by Avellana’s wife and National Artist of the Philippines for Theater, Daisy Hontiveros Avellana, to run for 45 minutes when it was performed on radio for DZPI station in 1953. It became an hour and a half long when it was adapted to the stage also by Daisy via her Barangay Theatre Guild. The movie version is based on the Guild’s stage presentation.

Portrait tells the story of how sisters Candida and Paula focused their lives on taking care of their esteemed painter father Lorenzo and keeping the house they are living in amidst their looming poverty and World War II.

As the play was written in English, the film is similarly dialogue-rich and has all its actors speaking lines in impeccable non-regional accented English, enough to put Philippine call centers to shame.

Director-cinematographer Mike de Leon kept the film’s negatives handed down to him by his father Manuel (The senior de Leon produced the film by providing 30,000 feet of black and white reels and P50,000, roughly P9 million in today’s money).

Thanks to the efforts of the Film Development Council of the Philippines, the National Film Archives of the Philippines (NFAP), Italy’s film restoration laboratory L’Immagine Ritrovata, Portrait’s black and white visuals are seen in crisp and almost HD-like quality.

A young Vic Silayan; the nuanced performances of stage actors Naty-Crame Rogers and Avellana’s wife Daisy Hontiveros; the dramatic musical scoring of Mike Velarde Jr. and the expert cinematography of Mike Accion are all seen and heard the same way it was seen and heard when it was first shown: fresh, clear and vibrant.

According to Avellana’s daughter Ivi Avellana-Cosio in a speech introducing the restored film, Portrait’s five-day run at the Rizal Theatre in 1965 was a flop. In today’s standard, the film could be likened to an award-winning yet unpopular indie movie wherein it excelled technically both in form and content but failed to capture the interest of mainstream audiences.

Portrait won the award for Best Technically-produced film when it was reissued in 1966 for the 1st Metro Manila Film Fest.

In the speech given by Teodoro Granados, executive director of the Film Development Council of the Philippines before Portrait’s screening, he highlighted the “care and affection” given to the process of restoring the film with the aim to reach the sector that has yet to see this Philippine classic. Due to the restoration, he also expressed hope that the “cause of Philippine movies is not yet entirely lost.”

THE VERDICT. A Portrait of the Artist as Filipino, an opus by a Pinoy master filmmaker, commands respectful viewing.

Despite its heightened melodrama, which is a staple in Philippine drama movies, and the deft care it applied to laying out the psychological intricacies of Candida and Paula’s relationship to their father Lorenzo, their Americanized boarder Tony, and the world outside their cloistered point-of-view; Portrait is not easy to watch.

It being performed in English did not add to its “entertainment quality” as there is an awkward feeling elicited when one hears fluent English dialogue being spoken by characters named Bitoy, Pepita or Manolo.

Awkwardness aside, the film is spot-on in its depiction of Intramuros’ decay and Manila’s descent to a “jungle of slums”--a social reality that is glaringly evident now as it was then.

Portrait easily elicits nostalgia for the old, appreciation for the new and the realization that not much has changed in-between.

The audio and visual restoration of A Portrait of the Artist as Filipino is successful in reeling audiences in to the solid and small world of Candida and Paula that one can’t help but feel trapped with them in their house and their obsession with the past.

The restoration also made it possible to see even minute details such as beads of sweat on the actors’ brows, the folds on their clothes, the gloss on the men’s pomade-rich hair and even houseflies subtly breaking the fourth wall.

Seen in its original glory, the way it is meant to be seen and heard, Portrait is a Philippine film treasure that is further enhanced thanks to the science of film restoration.

Personally, I once had the impression that old black and white local movies--the way I saw them on TV with their dark lighting and grainy visuals--reflected the low technology and clunky method of Philippine film production. Little did I know that time had the effect of erasing recorded images on film reels and, surprisingly, few knew or cared for these films’ preservation.

Vic Silayan’s character Bitoy--a journalist who served as the narrator and chronicler of Candida and Paula’s story--delivered the most apt if not perfect lines during the last minutes of the film. In light of Portrait’s successful restoration, Bitoy’s dialogue can be considered serendipitous:

“By your dust, and by the dust of all the generations, I promise to continue, I promise to preserve! ...To remember and to sing: that is my vocation…”

Hopefully, they will no longer sit in forgotten shelves gathering dust in the dark.