MOVIE REVIEW: Felix Manalo, through the eyes of an Iglesia ni Cristo member 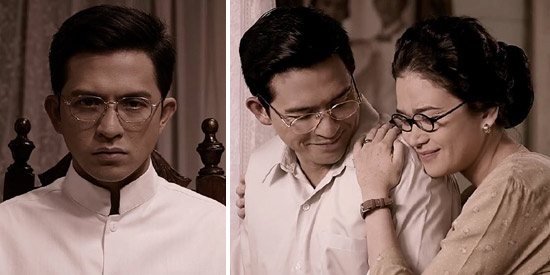 In the film Felix Manalo, Dennis Trillo is able to capture the nuances of Iglesia Ni Cristo's first executive minister. His wife Honorata is played by Bela Padilla.

Felix Manalo is a film that has been highly-anticipated by each member of the Iglesia Ni Cristo.

Initially a part of the church's 2014 centennial celebration, the movie finally held its grand premiere on October 4, 2015 and opened in theaters nationwide on October 7.

As proof of the anticipation for the epic movie, the premiere alone broke two Guinness World Records with 43,624 attendees at the Philippine Arena in Bulacan.

More people flocked to the theaters on the first day of showing, resulting in the highest grossing non-holiday opening for the biopic produced by Viva Films. Malls operated earlier than usual to accommodate more screenings.

Felix Manalo tells the story of a man whose life was devoted to finding and propagating the true church as taught in the Holy Bible. The film covers several time periods in Philippine history, as it starts during the birth of Bro. Felix Manalo in 1886 and ends with his death in 1963.

It chronicles the events that transpired from his inquisitive years while growing up as a Catholic, his studies in different sects and religions, registering the Iglesia Ni Cristo on July 27, 1914, and the trials and tribulations faced and triumphed by the church during his leadership as its first Executive Minister for almost 50 years.

Written by Bro. Bienvenido Santiago, the movie boasts of a powerhouse cast led by Dennis Trillo in the title role of Felix Manalo, and Bela Padilla as his wife, Honorata de Guzman. Both lead stars offer a stellar performance and give justice to their roles.

Dennis was tailor-made for the role, completely embracing his character as Iglesia Ni Cristo's first executive minister. He was able to capture Bro. Felix's nuances, especially in the scenes where he was listening to the brethren relay their horrifying experiences during the Japanese occupation.

Bela Padilla also held her own in the role of Sis. Ata. She handled her scenes with restraint and quiet confidence, shining in the parts that feature their initial meeting and succeeding courtship.

Scenes that stand out include the baptisms by the river and the first ordination of ministers. It was also breathtaking to see the original houses of worship used in the film, including the locales of Frisco in Quezon City and F. Manalo in San Juan, then the locale of Riverside (designed by National Artist for Architecture Juan Nakpil), where Bro. Felix’s remains were interred.

The movie, graded A by the Cinema Evaluation Board, runs long at 2 hours and 55 minutes. Given the time restraint, there was still a good amount of the movie that had to be cut and edited.

Personally, I would’ve liked seeing the part of the failed assassination attempt on Bro. Felix, as well as more scenes that showed how he was with his family.

As an Iglesia Ni Cristo member, I take pride in seeing the life story of Bro. Felix Manalo brought to life on the big screen. It was great to refresh my memory on the events I only previously read or heard about.

The movie is for members and non-members alike, especially the younger generations, to get to know Bro. Felix Manalo’s story as well as the humble beginnings of the church, and marvel at the things it has achieved more than a hundred years later because of God’s grace and guidance.

This movie is also a great vehicle for those who like to explore their beliefs or want to know about an inspiring Filipino and his unwavering faith, holding strong on God’s promise and making it through despite many adversities and persecution.