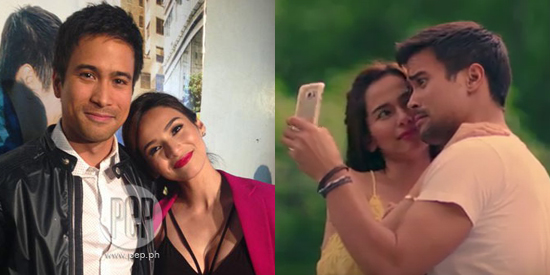 Jennylyn Mercado and Sam Milby partly shot their film, The Prenup, in New York. This romantic-comedy movie was able to earn P8 million in the box office on its opening day. (To learn more, CLICK HERE)

Once again, networks affiliations are blurred when GMA-7 actress Jennylyn Mercado and ABS-CBN actor Sam Milby are paired together in The Prenup.

Jennylyn is cast as Wendy, a woman who goes to the United States to meet her biological father. Onboard the plane, she meets Sam's character named Sean.

Wendy and Sean initially have a cat-dog relationship but they eventually warm up to each other.

When her biological father fails to accommodate her, Sean invites Wendy to stay in his apartment.

They fall in love with each other and decide to get married.

However, when they return to the Philippines, they become frustrated when their families don't get along. The rich guy's parents (played by Jaclyn Jose and Freddie Webb) insist that Wendy sign a prenuptial agreement.

Their lives become even more complicated when Wendy's parents (played by Dominic Ochoa and Gardo Versoza) add their own clauses to the prenup.

Produced by Regal Films, this romantic-comedy movie directed by Jun Lana is graded B by the Cinema Evaluation Board.

Without giving away too much info about The Prenup, here are six reasons to watch/not watch this rom-com:

In this movie, Jennylyn's character Wendy has a funny, perky personality (just like most stars in most romantic-comedy films). She is naturally funny and charming, especially when their romance was still in its infancy in New York.

However, she is unable to show her funny side during the last part of the movie. It's as if the perky Wendy was gone as soon as landed in the Philippines.

There are also funny moments to be expected from Melai Cantiveros (Wendy’s adopted elder sister), Dominic Ochoa and Gardo Versoza (the gay couple who are Wendy’s adoptive parents), Neil Coleta (the brother of Sean who is a closet gay) and Jaclyn Jose & Freddie Webb.

The Kapuso actress lives up to her title as this year's sexiest woman, according to a poll conducted by FHM Philippines.

One of the most memorable scenes involves a drinking spree between the characters of Sam and Jennylyn.

She seduces him just by making him choose between two personas: a sexually agressive tigress or an innocent, naive, virginal kitten.

Either way: it's a win-win!

3. Enjoy the breathtaking sights of The Big Apple.

The movie will not only make you fall in love with Sam and Jennylyn, but also with the streets of New York City.

The first part of The Prenup featured scenes of Jennylyn and Sam strolling around famous places in The Big Apple such as Central Park, the NY Times Square, and 32nd street.

Seeing Wendy and Sean have sweet moments in Instagram-worthy locations is definitely a treat for moviegoers.

The movie took almost two hours to finish and there are times when the pacing becomes dragging. The two families become at odds with each other because of a prenuptial agreement, a legal document with clauses that fill a whopping 200 pages. However, there are times when the parents would suddenly flare up and complain "niyuyurakan ang pagkatao" although there was no major trigger for this accusation.

5. The surprising chemistry of Jennylyn and Sam.

Even though this is their first team-up, Jennylyn and Sam nailed it when it comes to giving kilig to moviegoers. Sam's masculine physique and his naughty looks can actually make any woman fall for him. Jennylyn has the ability to make viewers believe that she is actually in love with her leading man and this was used to the hilt in this movie.


6. There are traces of English Only, Please in the movie.

It might be too much of a coincidence but during the first part of The Prenup, Sean and Wendy have miscommunication because the guy can't understand the Tagalog word used by the lady.

It brings to mind Jennylyn's recent portrayal of a tutor in the rom-com English Only, Please.

Her Wendy character in The Prenup even mentions the traffic in EDSA, which was frequently used by her previous character Tere in English Only, Please.