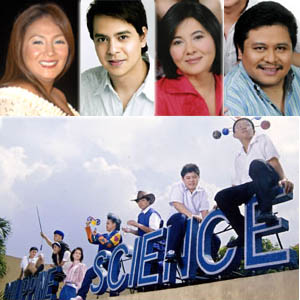 The Entertainment Press Society, Inc. (ENPRESS) has announced the winners in this year's 5th Golden Screen Awards (GSA). The awards night will be held on June 24 at Zirkoh Greenhills at 8 p.m. The final voting of the winners was held Saturday, June 14, at Music 21 KTV Bar on Timog Avenue after a marathon deliberation that took seven hours.

Cherry Pie Picache won for Best Performance by An Actress in a Leading Role (Drama) for Seiko Films' Foster Child, where she plays a surrogate mother living in the slums. It's her third acting award from the Golden Screen Awards. Foster Child, directed by Dante Mendoza, was a contender for the Best Motion Picture (Drama), as well as in other categories, including Best Screenplay.

John Lloyd Cruz won Best Performance by An Actor in a Leading Role (Drama) for One More Chance. Produced by Star Cinema, the story of young lovers who are going through the difficult decision of going their separate ways, gave John Lloyd the victory over Jason Abalos, his chief rival for the award. Jason was nominated for Endo, an entry to the Cinemalaya Film Festival last year.

This is John Lloyd's first award from GSA, although he has been previously nominated for Now That I Have You, adjudged Best Motion Picture (Musical or Comedy) in the 2004 Golden Screen Awards.

Jinggoy won the nod of the GSA jurors for his comeback movie Katas ng Saudi, where he plays a returning OFW (Overseas Filipino Worker). Jinggoy's winning the Best Performance by an Actor in a Leading Role (Musical or Comedy) for the Joey Reyes film is his first award from the GSA.

He earlier won the Best Actor award from the Metro Manila Film Festival last December for the same movie.

Lorna, although better known as a dramatic actress, displayed her comic flair in Katas ng Saudi, where she plays wife to Jinggoy. This is also her first trophy from the Golden Screen Awards.

Eugene won for her role as the Physics teacher in Pisay while Ricky won for his role as a weakling father abandoned by his wife in Endo.

Newcomers Rhian Ramos (Ouija) and Joem Bascon (Batanes) were voted as winners of Breakthrough Performances by an Actress and Actor, respectively. Both projects were produced by GMA Films.

The 5th Golden Screen Awards will be held on Tuesday, June 24, at Zirkoh Greenhills. It will be hosted by Rufa Mae Quinto and John "Sweet" Lapus, with other celebrities expected to attend.

Christopher de Leon is the recipient of the Gawad Lino Brocka Lifetime Achievement Award, named after the famed director who gave the actor his break into movie acting.

The Entertainment Press Society and the Golden Screen Awards will also confer a Posthumous Award to Rudy Fernandez who passed away last June 7.

Here's the complete list of winners in the 5th Golden Screen Awards:

Best Performance by an Actress in a Supporting Role (Drama, Musical or Comedy) - Eugene Domingo (Pisay)

Best Performance by an Actor in a Supporting Role (Drama, Musical or Comedy) - Ricky Davao (Endo)