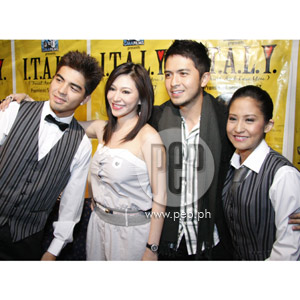 
The original plan for the press conference of I.T.A.L.Y. (I Trust and Love You) was to have the 7107 Island Cruise ship tour around Manila Bay. However, the weather did not cooperate since heavy rains occurred in Manila during the previous night. On the actual day of the press con, rain did not mar the sky but the ship remained docked at the North Harbor in Manila for the duration of the event.

Three continents, five countries and 13 cities serve as background of this charming and romantic story of intertwining lives and destinies of six people on a seven-day cruise. Viewers will be able to catch a glimpse of the tourist spots in Genoa, Milan, Savona, Napoli, Florence, Pisa, Rome, (Italy); Marseilles (France); Barcelona, Palma de Mallorca, (Spain); and Tunisia, Africa. The cast members and technical staff of this movie endured a lot of hardships in creating this movie. According to the assistant director of the movie, the temperature on the upper deck of the Costa Magica cruise ship reached six degrees, almost freezing his hand on the camera.

I.T.A.L.Y. is GMA Films' newest big-screen offering will hit theaters on September 17 instead of the original opening date of August 6.

In the film, show biz's eternal Miss Sunshine Jolina Magdangal plays the chambermaid Des Pinlac, a hopeless romantic who figures in a love triangle with lounge singer Rufa Mae Quinto. During the press con, the sexy comedienne did a riotous version of Cliff Richard's "Ocean Deep," a cut from her Viva Records album titled Four Sides of Rufa Mae. Dennis Trillo plays Paolo Guzman, a rich man determined to exorcise the demons of a past that haunts him.

In real life, Rufa and Dennis did become a couple, but it only lasted several weeks since the actor was then being paired with Angel Locsin in Darna. Rufa Mae, who has found love again with an American executive named Bobby Lopez, now says of her former flame: "Masaya ako to have finally worked with him [Dennis]. Proud ako na makasama ko siya kasi he's really one of the best actors in the country."

When asked if Dennis was one of the reasons she accepted the project, Rufa quips: "Baka mapaaway ako. Wala na akong mahihiling pa. For now, ha. For tonight." She effortlessly brought the house down with her one-liners.

Dennis feels just as privileged to be working with Rufa Mae. "Honored ako. [It's my] first time to work with her. She's a professional and fun to work with."

The women of I.T.A.L.Y. (Jolina, Rufa Mae, Eugene Domingo and Rhian Ramos) have found instant friends in each other. Jolina shares an anecdote about Eugene: "Si Uge brought a lot of medicines and charms to the shoot na nakakapagpatanggal daw ng hilo [seasickness]."

Rufa entertained the press with her trademark phrases like ibang level and bonggang-bongga, but gifted actress Eugene Domingo sent everyone laughing in her own way. When asked who among the male cast of the movie—Mark, Dennis, and newcomer Edgar Allan Guzman who recently starred in the indie film Imoral—she'd like to spend a night with, the comedienne was candid enough to admit, "Pasensiya na si Dennis at Edgar pero si Mark. ‘Di ba kamukha niya si George Clooney?" Then she turned to Mark whose cheeks naturally went red because of this compliment. Eugene coyly told Mark: "Hindi mo hihingin ang number ko?"