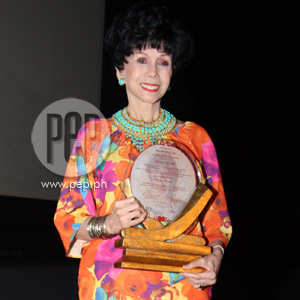 A month before her 77th birthday, Ms. Rosa Rosal received a tribute from Robinsons Movieworld and the IFC. Last September 17, Ms. Rosal received a plaque citing her for enriching the Philippine movie industry for her cinematic works such as Anak Dalita (1956), Badjao (1957), Biyaya ng Lupa (1959) and Sakada (1976)—all of which are currently being screened at IndieSine, Robinsons Galleria.


For the past six decades, Ms. Rosa Rosal has been an icon of the Philippine movie industry for her multi-faceted onscreen presence, most notably for films during her LVN days.

Last September 17, the actress who is best known as the face of the Philippine National Red Cross was given a tribute by indie filmmakers and Robinsons Movieworld for her valuable contribution to Philippine cinema. The effort to recognize Ms. Rosal's contribution to the movie industry was spearheaded by Prof. Clodualdo "Doy" del Mundo in cooperation with Robinsons and the Independent Filmmakers Multi-purpose Cooperative (IFC).

At 76 years old, Ms. Rosal still stands as elegant as ever and she carries herself with poise. She speaks softly but when it comes to talking about her chosen vocation for the PNRC, one can hear the passion in her voice.

PEP (Philippine Entertainment Portal) was able to interview her during the launch of Sine Klasiks in IndieSine, Robinsons Galleria. How does she feel about receiving a tribute?

This 1946 movie started her illustrious career, one that is marked by numerous awards including a special citation from then President Ramon Magsaysay and the Natatanging Gawad Urian (Lifetime Achievement Award) in 1987.

For the first quarter of Sine Klasiks, Robinsons Movieworld and the IFC bring back on silver screen, four of Ms. Rosa Rosal's critically acclaimed hits: Anak Dalita (1956), Badjao (1957), Biyaya ng Lupa (1959) and Sakada (1976). They will be screened at IndieSine, Robinsons Galleria until September 23, 2008.

Behn Cervantes (her director in Sakada) also gave anecdotes about Ms. Rosal's acting prowess during her time. "I saw that she was so good that people would boo her because she played a kontrabida at the time. I saw Rosa Rosal as a kontrabida of Philippine movies but later on, I saw that she became good. The bad had become good. She has become a good actress. At the same time, I realized that she had become a good person because she was the epitome of the Red Cross blood letting program. This woman became bigger than life. She became bigger than the screen characters she portrayed."

When Ms. Rosal went up the podium to accept her plaque, the audience gave her a standing ovation. In her acceptance speech, Ms. Rosal pointed out that Toni Rose is her diamond, her grandson John is her ruby while her other apo James is her emerald. She advices them: "Wala akong maipapamana sa inyong kayamanan, all I give you is a good name, pass it on."

Before she ended her speech, Ms. Rosal mentioned that she was so happy that she could have died the next day. However, her daughter Toni Rose Gayda waved her hand and indicated that she did not wish that would happen anytime soon.

SINE KLASIKS. This project aims to give commendation to the actors/actress who contributed most in the film industry with their talent and their craft. Their films who captured the heart of the Filipino moviegoers in the silver screen 50 years ago and after so many years hidden in the archives of history. Now, they will once again debut on screen in the 21st century at Robinsons Galleria.