"Lakeview Terrace" to be screened exclusively at Ayala Malls 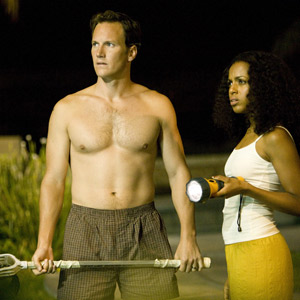 
Moving into a dream home on a quiet Southern California subdivision becomes a nightmarish ordeal for a young, interracial couple in Columbia Pictures' new suspense thriller, Lakeview Terrace, the latest explosive film from award-winning director Neil LaBute. A recent No. 1 box-office hit in the U.S., Lakeview will be shown soon exclusively at Ayala Malls Cinemas (Glorietta 4 and Greenbelt 3).

In the film, Chris and Lisa Mattson (Patrick Wilson and Kerry Washington) have just moved into their new suburban house when they become the target of their next-door neighbor. A stern, single father, this tightly wound LAPD officer (Samuel L. Jackson) has appointed himself the watchdog of the neighborhood. His nightly foot patrols and overly watchful eyes bring comfort to some, but he becomes increasingly harassing to the newlyweds. These persistent intrusions into their lives ultimately turn tragic when the couple decides to fight back.

"A lot of people have asked me what the whitest white guy in America is doing writing a movie that deals with interracial issues," says Lakeview Terrace screenwriter David Loughery. "I wanted to challenge myself and kind of get outside my comfort zone, so I wrote a thriller that dealt with issues we don't usually see in that context."

Loughery thinks many people will see themselves in the characters he has created. "I think people will identify with the situation. Whatever feelings they have about race and color and relationships, they'll bring to the theater and they will compare it to the action we're seeing on screen."

Director Neil LaBute exploded onto the movie scene with his 1997 feature film debut, In the Company of Men, which explores sexual politics. In the succeeding years, LaBute has built a reputation as a controversial filmmaker and playwright who is unafraid to pull back the mantle of civility covering the ugliest side of human nature.

When the script for Lakeview Terrace came his way, LaBute saw an opportunity to create a complex story, set in Los Angeles, that could be interpreted on many different levels. "I'd been living in Los Angeles long enough to be aware of the idea of fires encroaching on homes and racial tension and that kind of road rage thing," says LaBute.

Although the clash of opposites in the movie is racially charged, LaBute and Loughery are in agreement that the issue of race is just one facet of the escalating battle between neighbors in the story. "Lakeview Terrace isn't so much about race as it is about personal space, boundaries, turf and the lengths people will go to protect their property," says the writer. "I think everybody has had a situation here they've just moved in next to somebody who is ruining the quality of your life. It may be a barking dog or a kid with a garage band or something else, but we all know how little things between neighbors can escalate into gigantic feuds. This is the ultimate version of that story."

In the end, says Loughery, he wants the audience to be uncomfortable. "I want them to kind of twitch in their seats, but at the same time I want to make sure that they're entertained and have a great time."