Movies
Why Bianca Umali is unafraid to go solo

Bianca Umali is not your ordinary celebrity.

During her shoot for PEP.ph's (Philippine Entertainment Portal) Main Attraction, not only did she drive herself from Paranaque to Pasig, the location of Summit Studio, she also did her own hair and makeup--like a pro.

Being independent has become second nature to Bianca, who lost her parents at a young age. Her mom died when she was five and her dad when she was ten.

She said matter-of-factly, without any bitterness in her tone, "No one taught me how to be like this. No one told me to be who I am, because I learned every thing without having a choice."

With the guidance of her paternal grandmother, Lola Vicki, she learned to be responsible for her own actions and decisions even before she turned 18 on March 2 of this year. 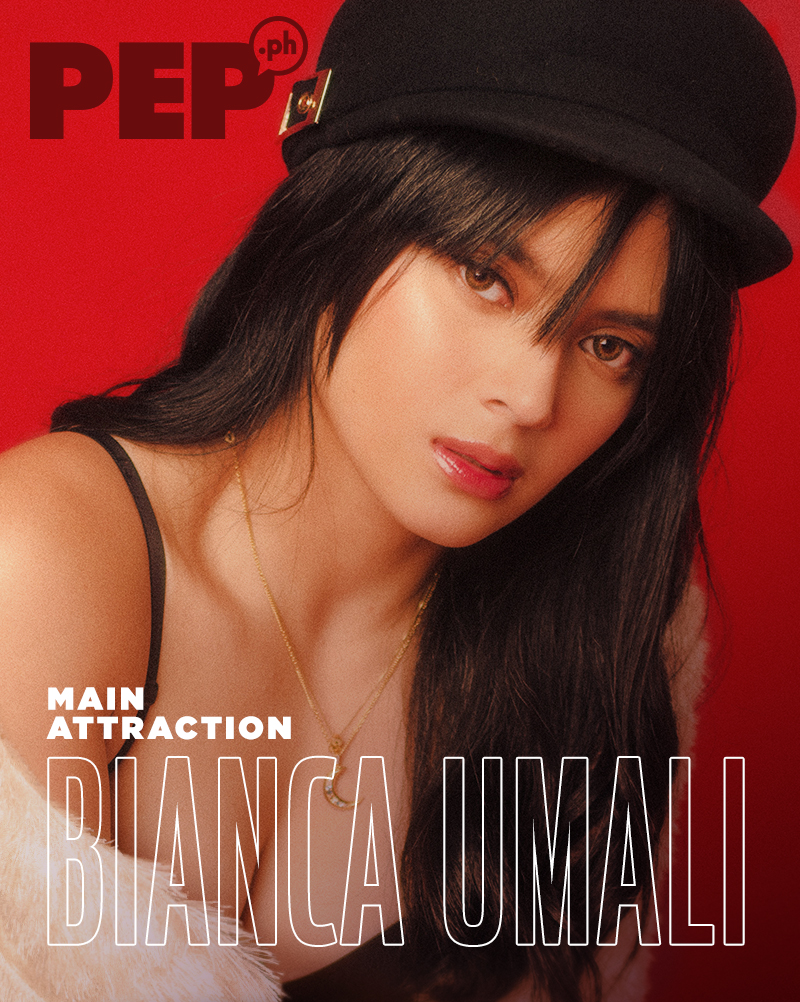 Hence, when this writer brought up the bashing she received from a well-intentioned social-media post and her involvement in an alleged reel-turned-real love triangle, she seemed unruffled.

Not seeing the need to revive those issues, she revealed how she overcame them instead.

"Ako, personally ha, kapag may ganon, I don't see it as ano, I don't dwell in it, e. I think yun yung magandang ginagawa ko na when there's something negative.

"Hindi siya yung something na nanamnamin ko na maglulugmok ako. When it happens, I accept that it happened, and see it not as a mistake, but as a lesson."

These lessons, according to her, might come in handy in the future. 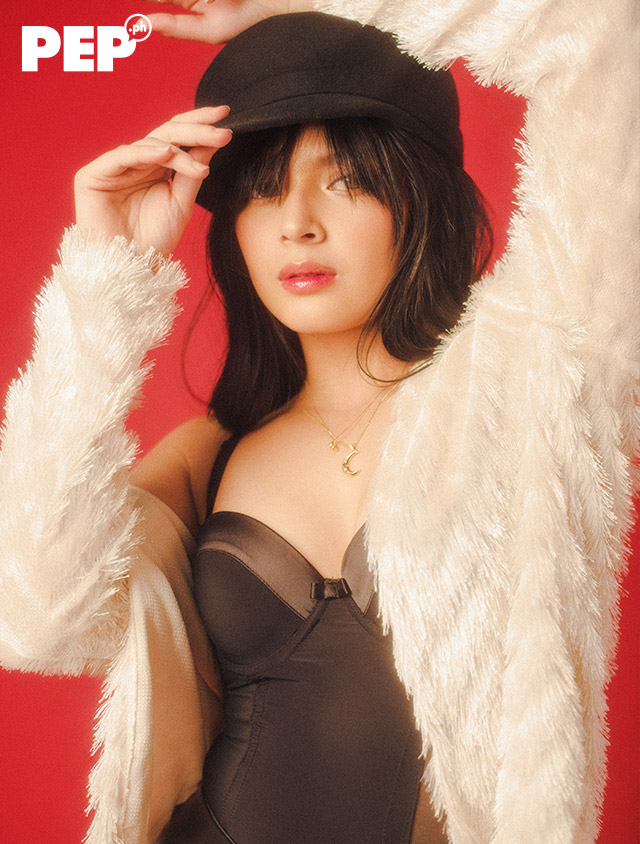 With regard to comments and criticisms, Bianca said she would listen only to people whose opinions matter to her.

"Parang sa pananamit, if I ask you bagay ba sa akin 'to, your opinion would matter because I asked for it.

"What matters to me is me.

Being too independent and headstrong may not sit well with some people, but for Bianca "it has advantages and disadvantages."

Careerwise, is she ready to say goodbye to BiGuel, her six-year-old love team with Miguel Tanfelix? 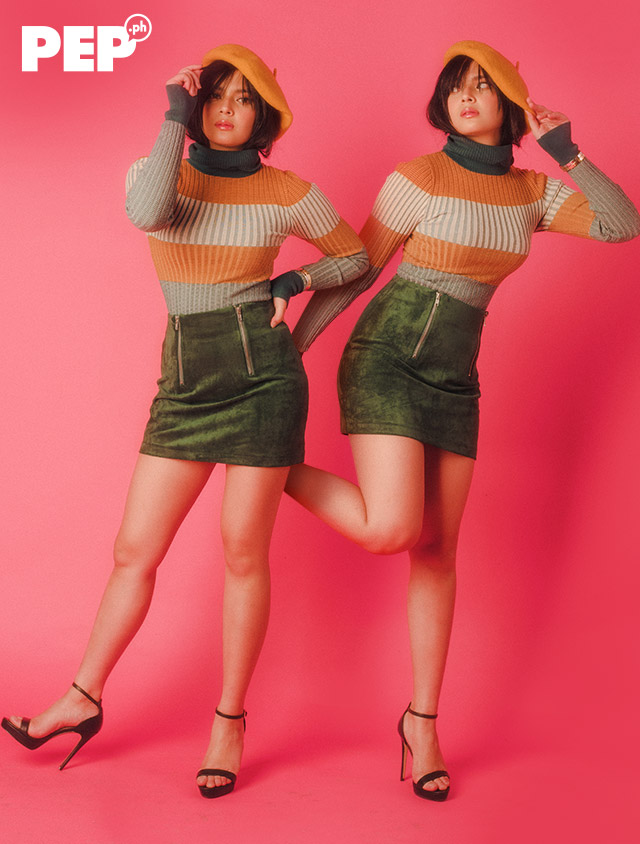 Her first solo project was in September 2017, when Bianca was tapped to be a part of Alaala: A Martial Law Special, a documentary top-billed by Alden Richards.

Before that, however, Bianca had repeatedly said she could not see herself doing projects without Miguel. 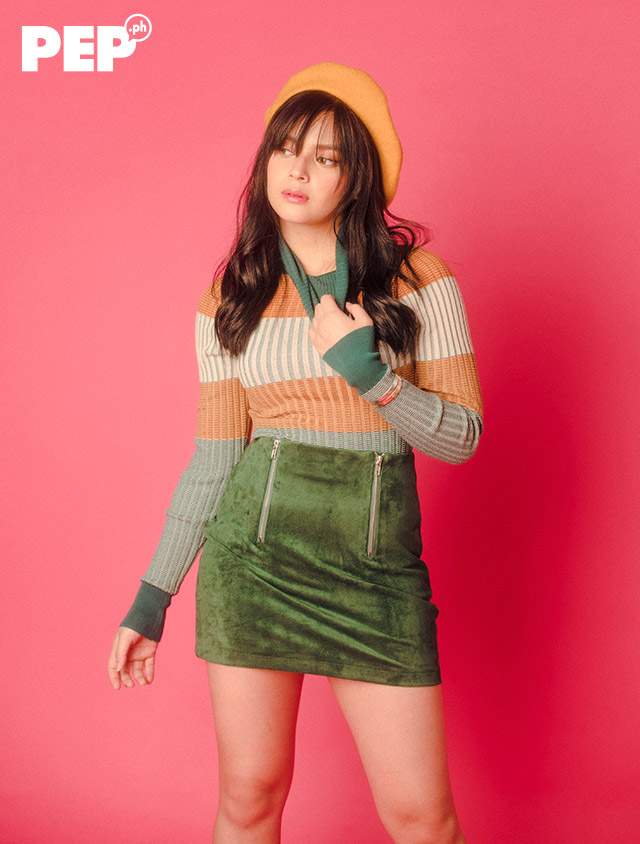 But BiGuel fans are in for a treat, Bianca and Miguel are set to top-bill a horror movie soon.

It will be their first movie together, the first time they will be tackling major roles on the big screen.

How did the shoot go?

FROM BIT PLAYER TO LEAD STAR

Now that Bianca is about to headline a movie for the first time, she could not help but look back to her humble beginning as a commercial model doing bit roles in teleseryes and movies.

"Now that I'm 18, I'm shooting this movie, which is also directed by Mike Tuviera. And this time, meron na akong role. 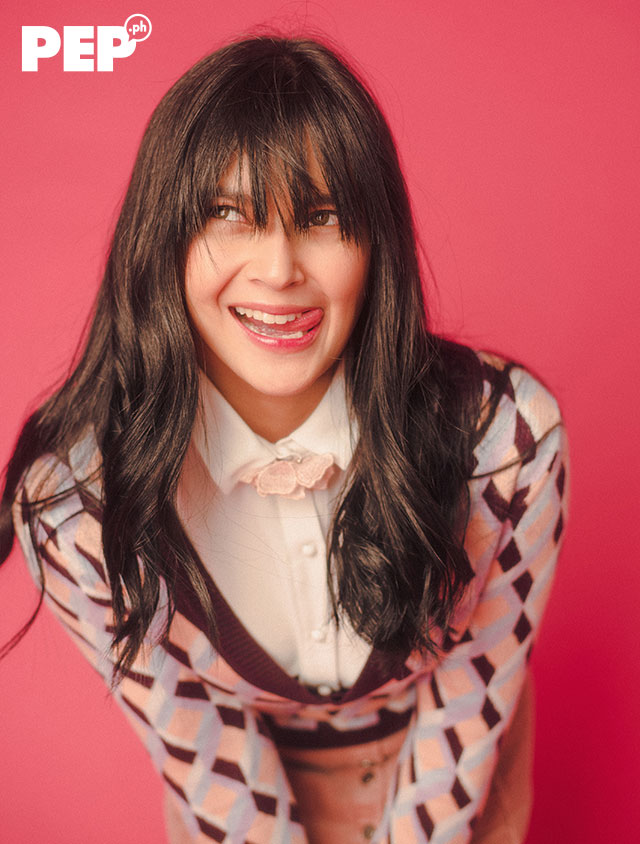 She went on recounting her journey in showbiz back when she was a a newbie.

She also remembered the time when she used to sleep in folded balikbayan boxes while waiting for her take.

But what the Kapuso actress said next surprised us. 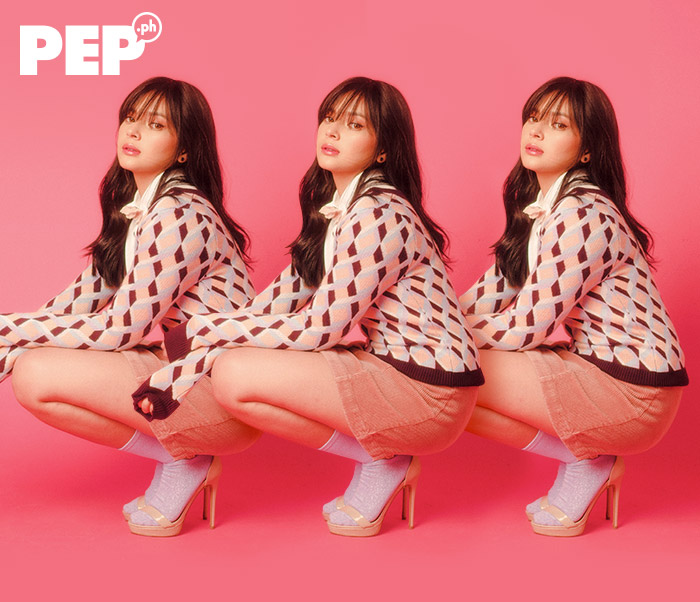 Her biggest break in showbiz was Tropang Potchi, a kiddie show that aired in GMA-7 from 2009 to 2015.

After her stint in the show, Bianca's love team with Miguel was born.

The last project would turn out to be their most successful teleserye to date, and gave Bianca the chance to work with the likes of Christopher de Leon, Carmina Villaroel, Alfred Vargas, Marvin Agustin, Jean Garcia, and Gloria Romero.

The 18-year-old actress then gave a brief history about their show, which aired for nine months.

"Dapat ang airing namin was January ng 2018, like early ng 2018, but since a show had to end and hindi pa ready yung papalit, kaya a show had to start agad ng November ng 2017.

Bianca owed her first film project to the success of Kambal, Karibal, including all the other opportunities she and her co-stars, Miguel, Kyline Alcantara, and Pauline Mendoza, are enjoying at present.

"It was a life-changer. Ganon ko siya makikita kasi it opened up so much opportunities for each and everyone of us. 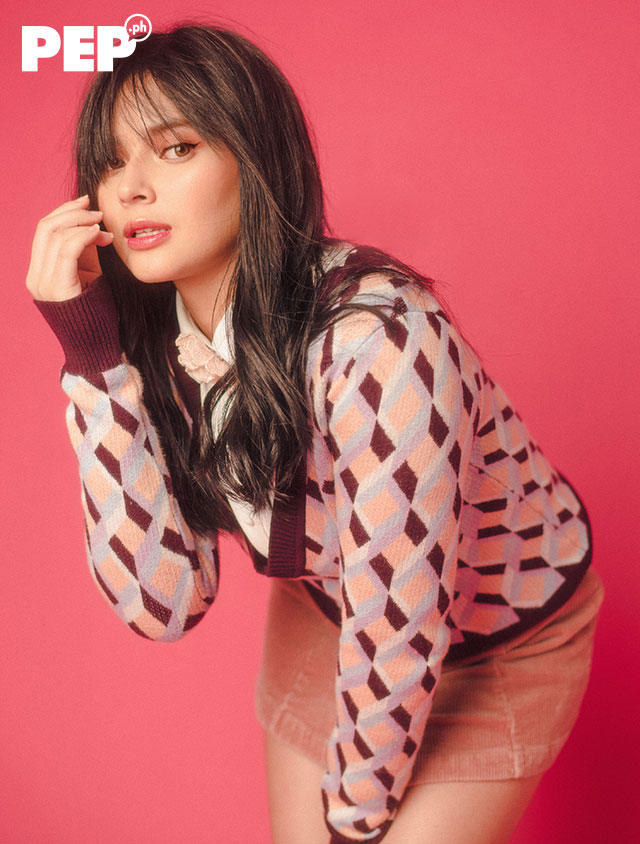 After the success of Kambal, Karibal, Bianca hopes to level up in her future projects.

PEP.ph asked: Does she have plans of reinventing herself?

And though she does not have a clear-cut idea yet on how she will reinvent herself, her goal is clear:

"Be smarter than how you were yesterday."

Bianca is not even anxious about the now and the future, as she lifts every thing up to God.

Question: What is your favorite childhood memory?

Question: What was the greatest achievement you had when you were young?

(Lea Salonga's singing voice was used for the movie's version of "Reflection.")

Question: What was one lesson that you learned noong bata ka na nadala mo ngayon?

Question: Which among the TV show you starred in is your favorite? 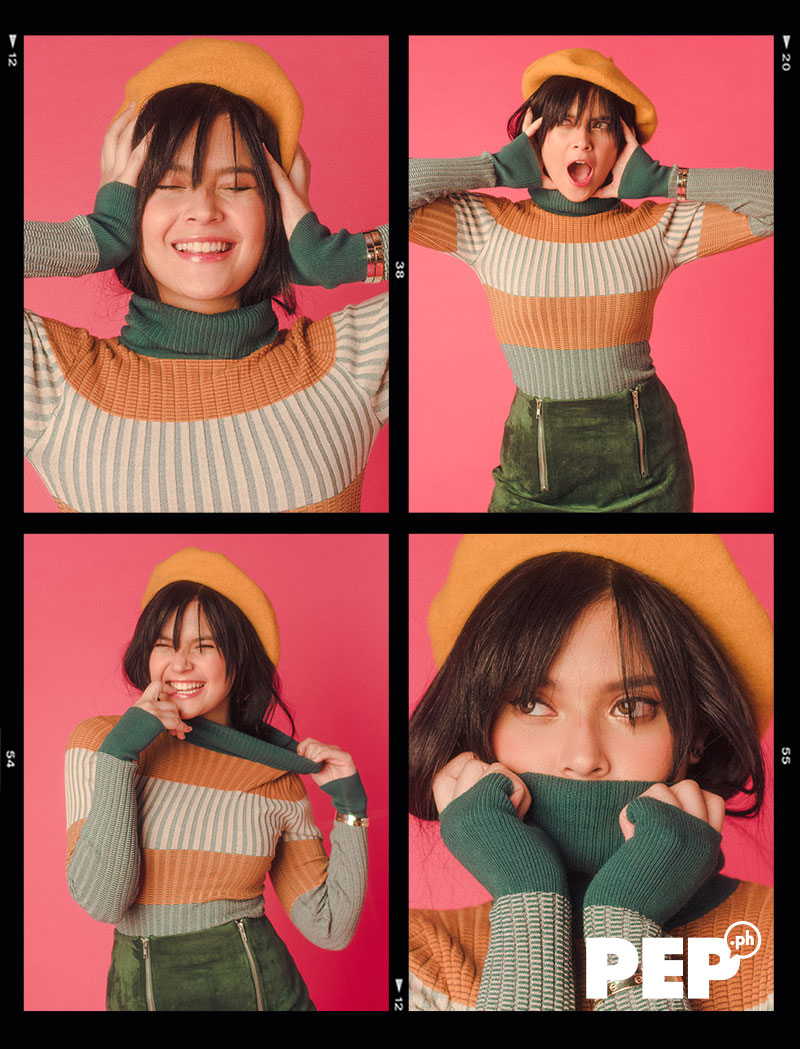 Question: What was the most independent thing that you did?

To stand up for myself. Explain ko ba? For me, yun yung biggest thing na nagawa ko, yun yung most independent kasi yun yung hirap na hirap ako. Kasi takot ako sa rejections and takot ako sa confrontations. Wala lang sa akin yung alagaan yung sarili ko, mag-manage ng pera, harapin yung problema sa buhay nang mag-isa, sisiw lang yun. Pero to stand up for myself, to know my worth, and to fight for what I stand and believe in, that was such a hard thing to do pero nagagawa ko na. And because of that, I found who I was.

Question: What was the sweetest thing that was done to you?

Q: How do you see yourself 10 years from now?