How do you find your "One True Love?" 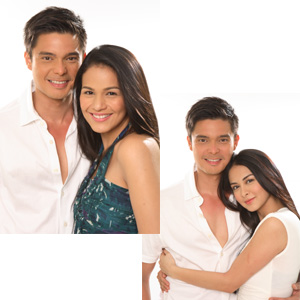 When Migs (Dingdong Dantes) develops lacunar amnesia, a time of amnesia that blocks off time periods from his memory, he must choose between Bela (Iza Calzado, left panel) and Joy (Marian Rivera). Find out his choice in the upcoming movie One True Love, which will premiere on November 19.


What would you do if you can't recall the past three years of your life? How would you make someone remember his feelings for you if his mind refuses to do so? And how could you let go of the past when you still have so many regrets about the present?

These are some of the questions that aim to be answered in the upcoming romantic drama, One True Love. The characters of Marian Rivera and Iza Calzado happen to be placed in the awkward situation of being in love with the same man, played by Dingdong Dantes.

PEP (Philippine Entertainment Portal) gives a background of the characters who will appear in this movie directed by Mac Alejandre.

MIGS (DINGDONG DANTES). A neurologist by profession, he was previously involved in a relationship with Bela (Iza Calzado), his first love. He was heartbroken when he and Bela went their separate ways when she left the country to live abroad. He dedicated his time to his work, where he eventually met another woman who made him fall in love the second time.

Unfortunately, an accident causes his memories during the last three years to be wiped out. Due to his amnesia and the medications that he is taking, he develops mood swings and hallucinations. As a recovering victim of brain injury, he talks about the lesson that he learned: the heart remembers what the mind forgets.

JOY (MARIAN RIVERA). She is a registered nurse in the same hospital where Migs is working. Three years ago, she was uncertain whether or not she would accept Migs' proposal since she was afraid Bela would come back in his life. She felt that she was just an available substitute, serving as first aid to his broken and aching heart.

Still, she took the chance and became completely devoted to Migs. When he develops amnesia, she patiently designs ways to make him remember their happy days together. She is determined to win him back and bring back his original mental state.

BELA (IZA CALZADO). She was madly in love with Migs until the time she left the country to go with her family. She returned to the Philippines in time for Migs' wedding to Joy. Seeing her childhood sweetheart invoked feelings of jealousy and made her realize that she had never stopped loving Migs.

After the accident, Migs only remembers his love for Bela, making her grateful for this second chance at love. Yet, she is also fearful of the time when Migs regains all of his memories-can she handle being separated from him the second time?

AVA (BIANCA KING). She is the younger sister of Migs who also works as a wedding planner. She has always wanted a sister and she finds that connection with Bela.

RAYA (JENNICA GARCIA). She supported Joy at the time when Migs forgot about his current love.

MRS. ROBLES (TESSIE TOMAS). She is the head nurse of the hospital where Joy and Raya work. She offers advice for those who are in a broken relationship.

MOTHER OF MIGS (PINKY MARQUEZ). She does not take sides when it comes to choosing between Joy and Bela. Her mother, Migs' grandmother, died of senile dementia so she knows the feeling of being forgotten by your loved one.

FATHER OF MIGS (CHINGGOY ALONZO). He is about to retire as an engineer and would often remind Migs to do the right thing.

LOLA OF JOY (BOOTS ANSON-ROA). She is based in the province but she still remains very close to her granddaughter.