"The Promise" is an immortal classic of enduring love 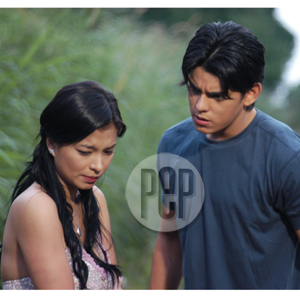 Angel Locsin holds her own as Andrea, the tragic heroine willing to sacrifice everything for her beloved Daniel (Richard Gutierrez).

After being paired in Mano Po 5: Gua Ai Di, Angel Locsin and Richard Gutierrez are back this Valentine season to ignite everyone's passion. Regal Entertainment and GMA Films made the right choice in pairing up this formidable love team, as proven by the box-office returns of The Promise, which reportedly reached over P10 million during its opening day.

Based on Emily Bronte's haunting novel Wuthering Heights, the film focuses on two lovers who overcome an ambitious older brother's wrath (portrayed by Ryan Eigenmann) and a revengeful haciendero (played by TJ Trinidad) in order to prove that time, power and greed cannot hold back the heart's pull on destiny.

As a remake of the 1995 film Hihintayin Kita Sa Langit, there is a lot of pressure for Angel Locsin to surpass or even equal Dawn Zulueta's acting mettle. Angel holds her own as the tragic heroine Andrea who is willing to sacrifice everything for her beloved Daniel (Richard). Her acting in this film is both refreshing and poignant especially in scenes that require her to react to the heartbreak brought upon by circumstances beyond her control. She performs drama with ease and knows when to push and control her limit. Richard Gutierrez, on the other hand, pales in some scenes that makes us wonder, when would be his breaking point. He is, however, credible as the jilted yet passionate lover who remains faithful to the lovers' vow.

The film's narrative is your typical romantic story but is saved by the lead stars' chemistry. When Angel and Richard appear in romantic scenes, you can't help but feel the sparks fly between these two. Their closeness on- and off-cam helped paved the way for their strong love team.

If the riveting love story won't get to you, then perhaps the clean and crisp editing as well as the picturesque cinematography will appeal to you. It doesn't help, though, that the story borders on being too melodramatic at times. But it doesn't matter as long as the romance and the passion between Andrea and Daniel is real.

Expect some clichés in the film but if you are looking for the promise of a kilig film, watch The Promise for the breathtaking scenes and feel-good chemistry that will surely make your heart flutter.