Gloria Romero fights for truth and justice in Fuschia 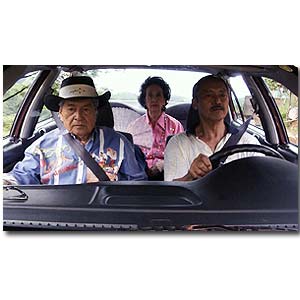 (From left) Veteran stars Eddie Garcia, Gloria Romero and Robert Arevalo live together under one roof in the Sine Direk entry Fuschia. It is currently being screened in select SM cinemas.
If there could be a category for best exit by an actress in a movie, that award would definitely go to Gloria Romero for the film Fuschia.

As Mameng struts proudly down a street wearing her fuchsia-colored dress, one can't help but wish that all senior citizens could be as empowered and as open-minded as she is.

A different Gloria Romero is seen in the film Fuschia: she swears and she has a streetsmart vibe that is uncharacteristic of the veteran actress. It took some time before she was convinced to deliver her swearing lines and the effect onscreen was absolutely surprising.

Directed by Joel Lamangan, this is the first movie to be screened in select SM cinemas as part of the Sine Direk film series.

(Click HERE to read more about the other entries.)

He describes the film as the "politicalization of a 62-year-old woman...how she was able to find her self-worth."


Fortunately, through the collaboration of APT Entertainment and Directors Guild of the Philippines, the wonderful story of Fuschia was told through the artistry of veteran stars Gloria Romero, Robert Arevalo, Armida Siguion-Reyna, and Celia Rodriguez, as well as young stars Iza Calzado and Richard Quan.


SYNOPSIS. Fuschia tells the story of Mameng (Gloria Romero), a 62-year old woman who has been living-in with Gener (Robert Arevalo) for the past 40 years. She was left behind by her husband Mars (played by Eddie Garcia) when he joined the U.S. Navy.


Mars never communicated with Mameng for four decades and Gener (Mars' best friend) took over the role of her husband. Suddenly, Mars arrived from the United States and decided to spend the rest of his ailing days with Mameng much to her surprise and much to Gener's chagrin.


Mameng opted to an unusual set-up of having the three of them live in one house. Her family (especially her sister, Juana played by Armida Siguion-Reyna) and townfolks consider it a big scandal but Mameng with all her noble intentions stood by her men. The simultaneous deaths of her two "husbands" made her rediscover her inner strength—and to fight for truth and justice.