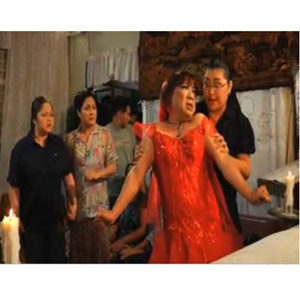 The characters of (from left) Manilyn Reynes, Gina Alajar, Roderick Paulate and Elizabeth Oropesa depict Filipino superstitions regarding death in the film Ded na si Lolo. This comedy is directed by Soxie Topacio.

What happens when a member of the family suddenly dies? What if the family of the deceased is not ready for the eventual passing away of their loved ones: how does one cope with the event?

The comedic tale of a large family coming to terms with the death of their lolo was given an "A" rating by the Cinema Evaluation Board. This ensures that this film receives 100 percent rebate on its amusement tax.

Directed by Soxie Topacio, Ded na si Lolo is based on his experiences with death when he was still a young boy. Child actor BJ Forbes actually represents Direk Soxie while Dick Israel, Elizabeth Oropesa, Gina Alajar, Roderick Paulate, and Manilyn Reynes portray the family members and the relatives whom he observed while they were burying one of his aunts.

He recalls that he was nine years old when one of his aunts died. He animatedly narrated how his mother and his titos and titas fainted one at a time during the wake. When the trailer of the Sine Direk entry was shown at Teatrino during the grand launch, members of the press and guests laughed heartily as the stars of the film were shown fainting during crucial moments of the film.

He says of his film, "Comedy ito pero may iyakan din."

This dramedy was produced by Tony Tuviera's film outfit APT Entertainment in cooperation with the Directors Guild of the Philippines project. It is one of six entries to the Sine Direk film series, which kicked off with the screening of Fuschia last week.

On May 20, Lore Reyes's film Litsonero will be screened; followed by Peque Gallaga's Agaton and Mindy on May 27; Mel Chionglo's Bente on June 3;and Maryo J. delos Reyes's Kamoteng Kahoy on June 10, 2009.

SYNOPSIS. Family members with unresolved issues gather together to mourn the death of the family patriarch Juanito Hernandez. But getting in the way of their genuine grief are a bunch of superstitions about the dead and the family's inability to deal with each other in a civilized way.

The story unfolds with the ever-observant eye of Bobet, a grandson of the deceased, who, in the process also learns the complexity of burying our beloved dead.

The Hernandezes are vendors in the local market of Tondo, Manila. Isidro, the eldest of the brood is a meat vendor, Dolores, is a fruit vendor, Mameng, is into home-cooked dishes and Charing is a vegetable vendor, Joonee, the second to the youngest is not of the vending business. He sells ‘happiness' as a female impersonator. Since all of them are purveyors, the main bodily instrument that they use is their voice boxes. Indeed, the Hernandez family is a family composed of loudmouthed individuals.

Through the course of the wake, Bobet learns about the superstitious beliefs that Filipinos follow when someone dies. No one is allowed to sweep and clean the premises of the wake. Members of the immediate family are not allowed to accompany anyone to the door or gate when they are leaving. Red is not the appropriate color to wear in attending a wake and many more.

Bobet is also witness to the fainting spells of his mother, aunts and uncle to which his kept ammonia were of great assistance. But a wake will not be a wake if there are no surprises. At the wake comes a mysterious woman - whom Isidro explained to his younger siblings as the first wife of their father. The drama unfolds with this revelation.

Resolutions and acceptance are but a way to appease the spirit of the dead. In one dramatic moment, Juanito's children are now one solid family.
Read Next
Read More Stories About
CEB, Cinema Evaluation Board, indie
Post a Comment
Featured
Latest Stories
Trending in Summit Media Network