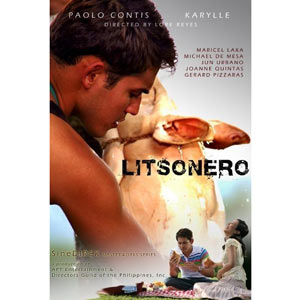 Can Fidel (Paolo Contis) make the perfect lechon in Litsonero? Find out if he will win the bet of a lifetime in this Sine Direk film, which opens this Wednesday, May 20.

The stakes are high in the indie film Litsonero and it all boils down to one particular dish: the succulent and juicy lechon (roasted pig).


For the third installment of Sine Direk, director Lore Reyes brings a film that will make viewers' mouths water as they watch Paolo Contis trying to cook the perfect lechon.


Where did Paolo learn to cook lechon?


With no experience in the kitchen, how did Paolo carry out his role as a chef then later on as a litsonero?


As Fidel (Paolo) learns how to cook lechon, he finds himself becoming attracted to Mang Carding's daughter, played by Karylle. They share romantic scenes in this film, which was shot for ten days in Lucban, Quezon and Macau.

Direk Lore says that Paolo's character is challenged to cook the perfect lechon or else face the consequences.

But aside from showing the richness of Pinoy cooking, this film asks viewers the following question: until when are children expected to show gratitude to their parents?


SYNOPSIS. Fidel (Paolo Contis) is a fresh culinary arts graduate from a Swiss school, working as an under-chef in a casino restaurant in Macau. Fidel is compelled by his mother, Inay Viring (Maricel Laxa), to come back to their hometown in time for the first death anniversary of his father.

Fidel starts apprenticing with the town's lechon master, Mang Carding (Jun Urbano) and falls in love with Carding's granddaughter, Carmel (Karylle). As the story moves forward, Fidel is constantly confronted by his familly's over-dependence on him, even if the eldest in the family is his Kuya Roger (Gerard Pizzaras), an ill-tempered trisikad driver.


Meanwhile, Fidel's teen sister gets pregnant by her high school boyfriend, and before long has a bad miscarriage. At around the same time, Tiyo Pinoy (Michael de Mesa) stabs the lover of his wife Cora (Joanne Quintas). All this domestic turmoil happens while Fidel is struggling through his training as a litsonero with Mang Carding.

Things reach a climax when Fidel gets into a heated discussion with his Tiyo Pinoy (who insists on calling his chef job "trabaho ng binabae"). Suddenly the bet turns dead serious. Originally the stakes were paltry. Now the stakes are notches higher: if Fidel loses—if his lechon doesn't turn out well—he will have to work as servant in Pinoy's bakery for a full year, and if Pinoy loses he has to take his wayward wife back into his life.