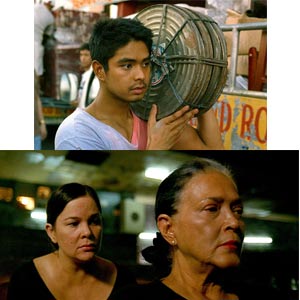 
In the 61st edition of the Cannes International Film Festival, Brillante Mendoza's film Serbis was called the "worst competition film in memory." In honor of Direk Brillante's achievements in the world of cinema, PEP pays tribute to his film that thrust Filipino filmmakers in the international limelight.

Serbis' reputation as an international succèss de scandale ironically precedes its mass reception in its home country. It generated derisive responses (most notoriously from Variety) during its screening as competition entry at last year's edition of the Cannes Film Festival, then reaped generally favorable comments from American film critics after it was picked up for distribution, plus a clutch of awards in a number of festivals closer to home. In certain respects it managed to avoid the spectacle of utter financial collapse that a controversial major release of the so-called Second Golden Age, Ishmael Bernal's Nunal sa Tubig, sustained, simply by circulating long enough in the international circuit to pique the curiosity of a number of film marketers.

On the other hand, it missed out entirely (so far, at least) on the fierce critical exchanges that Nunal sa Tubig initiated during its time among some of the best minds in local culture. Those who weighed in on the earlier release were almost entirely members of the film critics' circle, but all that Serbis can hope for today by way of high-profile commentary will be its performance in the same group's annual awards ceremony, a dispiriting and unseemly prospect for such an ambitious piece. For given the extreme responses that works like Nunal sa Tubig and Serbis foster, a year's worth of shallow rumination, summed up in the comparative evaluation process that award-giving confines itself to, will prove inadequate at best, inutile at worst.

The fact that Serbis suggests a comparison with a Bernal opus is more than just coincidental. Director Brillante Ma. Mendoza, like mid-period Bernal, has been prolific lately, leans toward contemporary material, and evinces a willingness to try out various genres and formats to the point where none of his films so far resembles any of his others. But where Bernal occasionally trained his expertise on the (then-still-numerous) members of the local middle class, Mendoza has consistently kept focus on the country's social Others. More significantly, Bernal opted to innovate in terms of storytelling, eventually becoming a still-to-be-recognized world-class master of the multi-character film narrative, while Mendoza, even this early, is already arguably the country's most eminent film stylist, designer, and colorist.

Serbis also raises the issue of how moribund the local film industry actually is. Mendoza himself has been able to maintain steady exposure for an impressive stable of talent, and actually provided a highly unlikely lead actress, the luminous but un-star-like Cherry Pie Picache, with opportunities to deliver a string of the most accomplished Filipino performances since the 1980s heyday of Nora Aunor, most memorably in her previous Mendoza project, Foster Child. Serbis itself abounds with a wealth of such intelligent detail—thespic, most obviously, but also cinematographic and sonic (if one allows that dialog acquires added dimensions when it is nearly overpowered by background "noise").

Where it treads on contentious territory is its decision to rely on a theorematic approach to its material. As propounded by the French philosopher Gilles Deleuze, a theorem is any internal mechanism that enables a film to achieve consummate, even mathematical, rigor, but it also potentially disadvantages the work in question unless a problematic (defined as a connection with "the outside") can be worked out just as assiduously. The universe that Serbis depicts dwells on a decrepit film palace, thus providing the rigidly reflexive logic of a film that mainly shows the showing of films. Almost instantly one can infer that the Family Theater functions as a metonym for the Philippines as a once-but-no-longer developing country: traces of past wealth and glories remain, not just in the labyrinthine passageways of the building, but also in the still-beautiful though irrevocably damaged faces and bodies of its main characters.

The film takes loving—detractors might use the term "perverse"—care in showing how this fallen institution's denizens manage the terms of their survival, even occasionally filching instances of pleasure, mostly carnal in nature, as the opportunities present themselves. The film's refusal to judge its characters' and setting's condition, redolent again of Bernal in Nunal sa Tubig and Himala (also rural-set narratives), seems calculated to exasperate, upset even, those eager to welcome a moralistic comeuppance. Bravely enough, the film insists on its reflexive theorem, first highlighting the inevitable queerness of its characters' sensibilities as their economic desperation intensifies, then eventually finishing with a sudden celluloid combustion, as if to tell us all, This is as far as any movie can get us to any truth, and how dare we even hope for more. With its narrative open ending (where the scriptwriter plays a patron who seeks queer pleasure in the streets) literally interrupted by an onscreen flare-up, Serbis attempts a formal equivalent of the apocalyptic free-for-all at the similarly open-ended climax in Bernal's masterpiece, Manila by Night.

The Family Theater's "outside" consists of descriptions by the theater-owning matriarch of the failure of both her movie-house chain and the court case she filed against her adulterous husband, augmented by occasional on-screen forays by some of the other characters into the streets of the town, all of which appear to share the dilapidation and despondency of the film palace. The fact that the said main character's descriptions are more powerful than the actual exteriors that get shown testifies partly to the effectiveness of Gina Pareño's delivery, but also implies that certain questions remain unanswered. In a globalized situation, the majority of business interests struggle or crash so that a privileged few may endure. What were these competing entities, how did they engineer the ruin of such magnificent and seemingly infallible structures as the Family (the theater and its residents), and how well are they doing in comparison? A glimpse into the so-called other half would have given us a firmer estimate of the price that the Family Theater's community has paid for the sake of progress elsewhere.

As it stands, perhaps the only way we have of comprehending the larger phenomenon that Serbis is discursively plugged into is by looking again at its foreign critical reception: it was the Americans who understood, and appreciated, what it was all about - namely, the near-complete devastation wrought by the specter of the globalization that they foisted on their neocolonial territories. Such a paradoxically enlightened response coming from an otherwise oppressive culture would have embarrassed old-school nationalists, including the type that Bernal eventually metamorphosed into. Whether Serbis will serve the function of elucidating this dismal state of affairs for the current generation of Filipino viewers is something that history will have to play out, well beyond the deadline of any forthcoming film awards or festival ceremonies.

(Joel David is a cultural studies professor at Inha University in Incheon, Korea.)