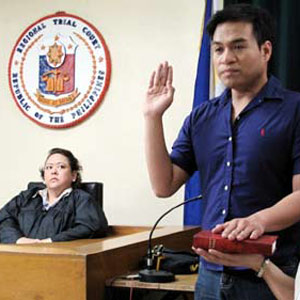 Malou Crisologo sits as the judge in the hilarious court comedy Last Supper No. 3. This Cinemalaya 2009 entry stars Joey Paras (standing) as the unlucky guy whose life is thrown into chaos because of a missing tapestry.

In the Philippines, the path to justice is like a long, winding staircase. It goes round and round, consuming all your time and energy. This is not only applicable to cases of homicide, rape, robbery, and other heinous crimes. Sometimes, even the pettiest offenses take that same winding road to justice.


Wilson (Joey Paras) is an assistant production designer tasked to look for a wall decoration depicting the Last Supper to be used as a prop for a corned beef TV commercial shoot. He found three. He presented them to the director and let him pick one. After the shooting, he realized that one of the borrowed tapestries was missing.


Unfortunately, the lost rug belongs to Gareth (Jojit Lorenzo), a scheming money-hungry son-of-a-gun, and Suming (Beverly Salviejo), his equally scheming mother. What started out as a petty offense turns into a legal circus that stole two and a half years away from our unlucky protagonist.


This certified audience hit at Cinemalaya Cinco proves that well-intentioned comedies can make a point. In the film, the gravity of the offense is not proportionate to what Wilson has to go through. And because of the inefficiencies of the procedures of the law, he found himself being charged with estafa and serious physical injury. Inside the justice halls, he was unwittingly pushed into a web of opportunism and bureaucracy. To make matters worse, the judicial process ran at turtleneck speed. Wilson faced tedious arraignment procedures, repetitively paid settlement charges, and met numerous delays.


Joey Paras is a discovery. With his natural gift of humor, this comic can give the likes of Chokoleit and Pooh a run for their money. Meanwhile, cameo appearances from Maricel Soriano, Ricky Davao, and Liza Lorena gave the film added punch. The musical scoring is likewise commendable. The lively soundtrack complements the jovial spirit of the film, although it has the tendency to become overbearing in some scenes.


Last Supper No. 3 makes fun of the legal nightmare that is the Philippine judicial system. It's a boring premise, but because directors Veronica Velasco & Jinky Laurel know very well not to take the topic too seriously, they veered away from the tendencies to preach about red tape and bureaucracy, The result? A courthouse comedy that is satirical and socially relevant.

Regular tickets to Cinemalaya are priced at P100 while students can buy tickets for only P50. A day pass costs P300 (good for 5 screenings per day) while a festival pass costs P1000 (can be used for all screenings).