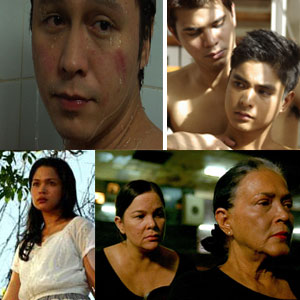 Some co-stars are competing against each other for acting awards in the 32nd Gawad Urian. Baron Geisler of Jay (upper left) has been nominated in the Best Actor category along with Paolo Rivero and Coco Martin of Daybreak. In the Best Actress category, Judy Ann Santos (lower left) of Ploning is pitted against Jaclyn Jose and Gina Pareño of Serbis.

The Manunuri ng Pelikulang Pilipino has already released the list of nominees for the 32nd Gawad Urian for excellence in filmmaking.

In last year's edition, the indie film Tirador was hailed as "Pinakamahusay na Pelikula" while its director Brillante Mendoza was cited for "Pinakamahusay na Direksyon." The recipient of the Natatanging Gawad Urian was acclaimed filmmaker Kidlat Tahimik.

(Click HERE to view the winners of the 31st Gawad Urian)


The awards night of the 32nd Gawad Urian is set for September 19 at the Cultural Center of the Philippines.

Based on the list given by the Manunuri, Yanggaw earned 11 nominations out of the 12 categories of Gawad Urian. This included double nominations for Tetchie Agbayani and Aleera Montalla of Yanggaw for the category Best Supporting Actress.

Two of the films nominated for Best Picture were shot in Mindanao: Hunghong sa Yuta, described by the Manunuri as a "poignant movie about war and peace in Mindanao as seen through the eyes of deaf-mute children" and Imburnal, which is called "a bucolic but mordant romp through the dirty creeks and grimy alleys of Davao City."

Here is the list of nominees for this year's Gawad Urian:


The names of the persons nominated for the technical awards will be given at a later date.

The Manunuri ng Pelikulang Pilipino is headed by Rolando Tolentino, dean of the UP College of Mass Communication. Other MPP members are National Artist for Literature Bienvenido Lumbera; Nicanor Tiongson, former artistic director of the CCP and former chair of the Movie and Television Review and Classification Board; Mario Hernando, Sunday Malaya editor and MTRCB member; Miguel Rapatan of the De La Salle University; Butch Francisco, columnist and co-host of Startalk; Lito Zulueta, Inquirer lifestyle editor and professor at the University of Santo Tomas; and Benilda Santos and Tito Valiente, professors at the Ateneo de Manila University.