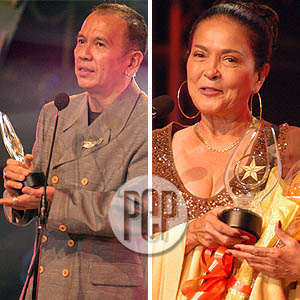 Gina Pareño (right) and Direk Joey Reyes won in their respective categories—Movie Supporting Actress of the Year and Movie Director of the Year—for the romantic comedy Kasal, Kasali, Kasalo.

The Philippine Movie Press Club (PMPC) dubbed their awards night as "A Night of Winners, A Night of Champions, A Night of Triumph." For several hours that Friday night, the University of the Philippines Theater in Diliman, Quezon City, was filled with Star awardees, champion singers, and triumphant winners. In fact, 24 trophies were given away by the PMPC that night—five of which were bagged by KKK.

Judy Ann Santos (who was caught up in traffic en route to the venue, causing her to miss the awards night) was represented by her brother, Jeffrey. When he accepted the Movie Actress of the Year award from the PMPC, he told the audience: "She [Judy Ann] wants to thank PMPC for giving her this award and Star Cinema for giving her the chance to win this award. Pinaparating rin po ni Juday na sana daw yung page-enjoy natin sa panonood ng Kasal, Kasali, Kasalo ay pareho ng enjoyment they went through when they were making this film."

This Star Cinema entry was also chosen as Movie of the Year and had the Most Original Screenplay of the Year. Gina Pareño also took home the Movie Supporting Actress of the Year for this romantic comedy. "Thank you for trusting in me, PMPC [Philippine Movie Press Club]. Malaking bagay ang magagawa sa akin nito. I will treasure this," said the veteran actress in her acceptance speech. Gina bested Pops Fernandez (Zsa Zsa Zaturnnah: Ze Moveeh), Liza Lorena (Inang Yaya), Cherry Pie Picache (Twilight Dancers), and Jodi Sta. Maria (You Are the One) for the said category.

When Direk Joey Reyes was called twice in a row for winning Movie Original Screenplay of the Year and Movie Director of the Year, he told the audience: "Again, maraming salamat sa Star Cinema for your ceaseless trust sa akin bilang isang director. Maraming salamat, Judy Ann Santos at Ryan Agoncillo. Maraming salamat sa lahat ng aking production staff na sa napakaraming taon ay tinitiis ang aking kabaliwan...As I've said before, there is no such thing as a best director. There are only directors who try their best to keep you entertained. I share this with all the other nominees. It just so happened that I'm the only one who is holding the trophy right now. This is as much yours as this is mine. Mabuhay ang pelikulang Pilipino!"

Here is the complete list of winners during the 23rd Star Awards for Movies:

Movie Editor of the Year

Movie Production Designer of the Year

Movie Original Screenplay of the Year


Movie Cinematographer of the Year

Charlie Peralta (Don't Give Up On Us)

Movie Musical Scorer of the Year

Movie Sound Engineer of the Year

"Sana Ay Malaman Mo" (Theme song from the movie Don't Give Up On Us from Star Cinema. Composed by Ogie Alcasid and Louie Ocampo/Interpreted by Piolo Pascual)

Darling of the Press

Male Star of the Night

Female Star of the Night

Male Face of the Night

Female Face of the Night

Click more photos to view the Star awardees and the the presenters.