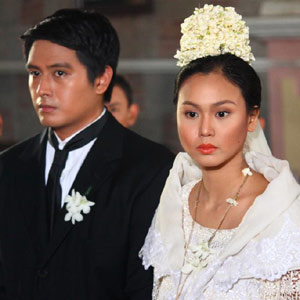 Alfred Vargas and Danielle Castaño portray Andres Bonifacio and Gregoria de Jesus in the film Ang Paglilitis ni Andres Bonifacio. (CLICK HERE to view the schedule of screenings of this Mario O'Hara film at the Cultural Center of the Philippines)

Probably two of the most serious categories in filmmaking are historical or period movies and courtroom dramas. Renowned director Mario O'Hara's film, Ang Paglilitis ni Andres Bonifacio, combines these two sub-genres, risking the possibility of being conceived as too complicated or worse, boring.


With Philippine cinema's rich collection of films about the country's war heroes, Ang Paglilitis could be regarded as another worthy addition to the long list of films that depict the lives of our historical figures. It could also be counted as one of the many biopics about the faces in our coins and bills and if it's lucky enough, it could well be one of the films endorsed by the Department of Education for required viewing among students.

Ang Paglilitis is one of the five competing films in the newly established Directors Showcase category in this year's Cinemalaya. This new category opened the festival's doors to films by directors who have megged at least three commercially released films.

Now on its sixth year, the annual Cinemalaya Philippine Independent Film Festival has been known for featuring movies with fresh approach to portraying contemporary life. The festival's acceptance of films with offbeat themes made it a breeding ground for a whole new generation of brave and bold Filipino filmmakers.

What then is a re-telling of several days in Philippine history doing in this film fest? It is being faithful to the Cinemalaya tradition.

Ang Paglilitis is a brave and bold retelling of the trial of Andres Bonifacio, a version different from the sanitized version in textbooks. It flirted with the questions that your elementary history teachers probably tried to avoid. It broke the illusion that our national heroes are part of one big happy Justice League. It showed our heroes' ambitions, tactics and flaws that can make viewers realize that the dirty and venomous politicking happening in present Philippines is in our blood and can be traced back to more than a century ago.

The film begins with a moro-moro production (which is also called by the more politically correct term komedya). Viewers will be transported back to the 1890s, during the founding of the Philippines' revolutionary government.


Throughout the film, the point of view will shift from the stage play to real life but through masterful editing, one will hardly be confused by the jump. It greatly helps that amidst all the historical lessons served to us in sepia, there someone to guide us: the mysterious "Ibong Adarna" (Mailes Kanapi) who in her crystal clear voice and enunciation, narrates the events in a way that's often poetic, thought-provoking and sometimes humorous. With her shaved head and white-dyed eyebrows, the theater actress makes a powerful statement with her appearance alone.


Another creative device tapped by Direk Mario in this film is the use of color. When it came to telling the love story of Andres Bonifacio (Alfred Vargas) and his wife Gregoria de Jesus (Danielle Castaño), the camera showed vibrant colors but as soon as the trial started, everything turned into monochromatic sepia.


The plot thickens when Andres and his brother Procopio (Janvier Daily) is arrested and accused of treason. The movie revolves around the power play of the two factions, both believing that they are the legitimate leaders of the revolution.


The internal division stems from the election of Gen. Emilio Aguinaldo (Lance Raymundo) as President of a new revolutionary government that undermined Bonifacio's role as the Supremo of the Katipunan. From then on, it becomes a war of Filipinos versus Filipinos and culminates with the Bonifacio brothers being put on trial and in danger of being sentenced to death.

Viewers will hear the accounts of all the witnesses in the trial, with nothing added and deleted, as stated in the disclaimer in the opening credits. One by one, the witnesses come forth—some betrayed their Supremo, some remained loyal to their principles.


The war council decides to order the execution of the Bonifacio brothers on a mountain. But it doesn't end there. Direk Mario offers a mythical ending that involves the search of Gregoria de Jesus for the body of her husband.

One of the most interesting and intelligent aspects of this movie is the involvement of the viewer as a jury member in the proceedings. The film avoids portraying Emilio Aguinaldo as the bad guy and Bonifacio as the victim, and vice versa. So whether you are for the Magdalo group (Aguinaldo) or Magdiwang group (Bonifacio), you'll find yourself analyzing both sides and objectively weighing the points of both parties.

Beauty queen Danielle Castano, handpicked by Direk Mario to play Andres Bonifacio's wife Gregoria De Jesus, does not seem like an acting neophyte. She was able to effectively portray her role that had her shifting from a woman in love, to a wailing captive, to a fearful witness and a grieving widow. Castano's Filipina look also helps her in being a believable Gorya, although there were times when she seems to forget that she's supposed to be using old fashioned Tagalog and she was caught mispronouncing some Tagalog words.

In the title role is Alfred Vargas, whose depth and intensity as the Supremo are felt during the hero's turn to face the prosecutors. Much is expected from Alfred in this movie. However, his portrayal of Andres Bonifacio did not leave enough impact to give what could have been a spine tingling or anger evoking performance as the hero who many Filipinos could sympathize with, especially since he is considered as the underdog in one of our history's darkest chapters.


The same can be said about Lance Raymundo who plays Emilio Aguinaldo, the general who's often misunderstood and misjudged. They both failed to connect with the viewers, and connection is very important for the lead characters.

One thing is certain, the movie is excellently written and cleverly told. It is one of the few period movies that are unnoticeably lengthy, because every scene keeps viewers on their toes and every plot development coherently leads to another.


Ang Paglilitis is exciting, especially for Filipino viewers, because it triggers the imagination regarding the possible discrepancies on what we thought happened in the past and what actually transpired, based on historical records.


More importantly, it dares us to rethink our notions about the heroes whom we revere. It proves that they are human, not gods. Before they were immortalized as stone monuments, these heroes were flesh and blood—capable of being loved, being hurt and being martyred.


Tickets for all Cinemalaya entries are available and may be bought at CCP Box Office or Ticket World. (CLICK HERE to read the synopsis of other Cinemalaya 2010 entries)