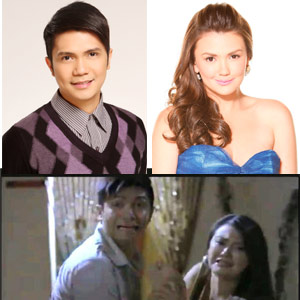 The characters of Vhong Navarro and Angelica Panganiban in Bulong try to end the haunting that comes with getting a wish.

There are people who ask "Nakakatakot ba?" about a horror movie and when you answer, "Oo, nakakatakot!" they'd tell you, "Ay, ayoko n'yan, nakakatakot pala!"

Well, isn't that the point of horror movies? To ask whether one is "nakakatakot" is like asking if a musical has song numbers in it.

After watching Bulong, you realize that while it has frightening moments, the movie does not aim to kill you with a fright-induced heart attack. Unlike his unforgettable Star Cinema horror flick Feng Shui (which may have caused viewers' nightmares and panic attacks and fear of associating their Chinese astrological signs with fatal objects), director Chito Roño uses Bulong to give the audiences a jolt and make them laugh afterwards.

Like Direk Chito's previous horror films, however, Bulong also picks a superstitious belief rooted in people's desires and aspirations and is darkened by evil forces. Bulong brings up the belief of whispering your wishes to the dead and the guaranteed fulfillment of all your dreams, no matter how impossible. So, would you like to get whatever you want but risk your and your loved ones' life and soul?

Bulong is about hospital worker Conan (Vhong Navarro) who is seriously in love with nurse Ellen (Bangs Garcia). One night, he witnesses the death of an old woman hit by a car and whispers in her ear his desire for Ellen to fall in love with him.

He gets his wish but the complication begins when he, with the help of his best friend Oprah (Angelica Panganiban), discovers the old woman's involvement with a demon. Conan and Oprah then travel to the old woman's province to end the evil haunting that he and his family and friends experience.

The movie is packed with scary moments that are always followed up by light and funny scenes that will make viewers laugh, first at the movie and next, at themselves. Watching it is like being in an amusement park's house or tunnel of horrors to scream silly "Eeks!" while having fun. And unlike the popular horror trilogies, Bulong takes advantage of its full-length running time to bring in as many scenes as possible, all adding up to the story's general theme and storyline.

This is not the first Pinoy horror-comedy movie. But Bulong is different because its comedy does not cause the mystery elements, as well as its folklore-rooted storyline, to suffer. There's the mangkukulam, a scorpion-like creature that appears in scary and mysterious shadows, and of course, the very creepy image of a well-known Philippine "tourism ambassador," which may remind viewers of the Donnie Darko bunny.

Making the combination of fright scenes and punchlines effective are the two lead stars Vhong Navarro and Angelica Panganiban.

Vhong has established his own brand of comedy and does not appear to be mimicking the comedy greats. His body language and facial expressions are excellent for both comedy and horror. It's hard to imagine any actor more suited for his role. Watch out for his and the ghost's bathroom scene. Angelica Panganiban shows her effortless versatility in tackling the comic parts of her role. The two actors stand out in their respective roles but the love angle is unnecessary and utterly forgettable.

Most of the other cast members provide good support to the tandem, that even the small roles do not appear as fillers. Watch out for quick cameos from known Kapamilya stars. The only downside are characters that stick out for the wrong reasons, like Jon Avila's, the awkward dubbing, and the computer-generated demon that looks more like it belongs in a Wansapanataym TV episode rather than a full-length live action movie.

Bulong can be described as a "feel-good horror movie," the kind that's perfect for those who need to ask "Nakakatakot ba?" before watching a scary flick. But for the purists, the true-blue fans of horror, this may be too lightweight, a wasted opportunity to play around a promising premise by diluting it with comedy.