PEP REVIEW: Catch Me...I'm In Love is a simple love story with a lot of heart 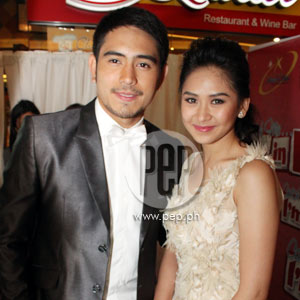 The debut team-up of Gerald Anderson and Sarah Geronimo has good chemistry.

This is how Star Cinema and Viva Films established the story of Catch Me...I'm In Love, which pairs Sarah Geronimo and Gerald Anderson for the very first time.

Sarah, plays the role of Roan Sanchez, a plain Jane working as a social worker in Helping Hands, a non-profit organization.

Roan believes that "true love waits." She is the only girl in the Sanchez family— composed of brothers played by Ketchup Eusebio, Alchris Galura, and Janus del Prado—and is usually the center of attention.

Completing the Sanchez family are Joey Marquez and Arlene Muhlach who portray the parents who manage a flower shop.

On the other hand, Gerald Anderson plays the role of Erick Rodriguez, the president's son and tagged as the "most eligible bachelor in the country."

After completing his studies in the United States, he returns to the Philippines and girls go after him in a frenzy.

It is during an event organized by Helping Hands where Roan and Erick's paths cross and they fall in love.

There's really nothing remarkable about the plot. The movie is fast-paced and straightforward unlike most Tagalog films with a lot of drama and conflicts.

The characters, however, are wrought with personal issues, like Roan's insecurities and Erick's complicated relationship with his dad.

But love conquers all and the social worker ends up with the presidential son.

Sarah effortlessly conveys the emotions of a girl who falls in love for the first time, and she falls real hard.

Gerald, on the other hand, was convincing as the guy who falls for the girl way out of his league, and stays true to his feelings.

Expect: Cheesy lines, giggling and swooning in the theater.

Please applaud: The movie's attempt to tackle social issues. The immersion scene in a provincial community is a heartwarming backdrop to the blossoming romance of Erick and Roan.

Catch Me...I'm In Love is showing in theaters nationwide starting today, March 23, 2011. It is directed by Mae Cruz and is graded B by the Cinema Evaluation Board.