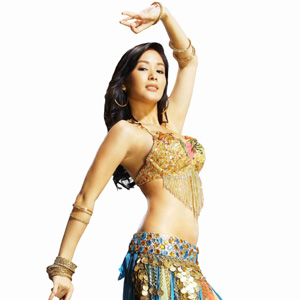 In this photo, Heart Evangelista wore a belly dancer outfit for her pictorial in GMA-7's telefantasya Asero (2008) . This 2011, Heart will be one of the four GMA-7 stars who will topbill the remake of the sexy comedy Temptation Island.

This sexy comedy film is about a group of beauty contest finalists stranded on a desert island without food, water, and shelter.


Just like the the original movie, the 2011 version of Temptation Island will be shot among the sand dunes of Paoay, Ilocos Norte.

During the April 1 episode of 24 Oras, Heart Evangelista explained why she decided to switch roles with Temptation Island co-star Lovi Poe.

Since the shooting will last for a week, she and her boyfriend, Brazilian Daniel Matsunaga will be temporarily separated. But Heart isn't bothered. "Yes, I know...my Papa Daniel, but it's ok...in Jesus name, forever kaming magsasama...what's one week?"

Her boyfriend Daniel was very concerned when her family's house in Carmona, Cavite got burned down recently.


Though still feeling extremely sad, she has come to terms with the misfortune and "accepted" it. Heart related that Daniel "was very, very nice, 'saka yung kapatid niya...brother niya. They all went and brought clothes for my Dad kasi walang damit ang Daddy ko. They brought him food."

When asked about her summer plans, Heart excitedly disclosed that she is set to go to Brazil with Daniel. She's looking forward to this trip. "I really plan to go to Brazil. Hopefully pag nag-showing na ang movie, e-exit thing na ako. Of course, I've never been there. Magte-take ng pictures, meeting Daniel's family, seeing their culture, their food, everything, so I'm very excited for that."