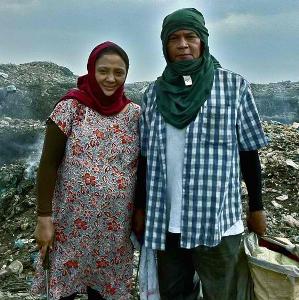 Cherry Pie Picache's character in Isda (Fable of the Fish) is said to give birth to a dalag (mudfish). Bembol Roco is her husband in this 2011 Cinemalaya entry directed by Adolfo Alix Jr.

One of the entries in the Directors' Showcase category in the 7th Cinemalaya Philippine Independent Film Fest and Competition is Adolf Alix, Jr.'s Isda (Fable of the Fish).

The story is based on an incident that happened in Manila, when a woman reportedly gave birth to a fish.

This year's Cinemalaya will take place from July 15-24, 2011 at the Cultural Center of the Philippines (CCP)

The director, Adolf Alix, Jr., who has done a number of independently-produced movies, was enthusiastic about speaking to PEP (Philippine Entertainment Portal) about his latest project.

Filming is currently going on.

In an e-mailed "Q & A" sent to to PEP, the award-winning director expounded on the material and detailed the logistics that went with this particular indie film entry.

THE PEP INTERVIEW. Here's what Adolf Alix, Jr. said about Isda (Fable of the Fish):

"Isda is based on the account in the eighties about a woman who gave birth to a dalag (mudfish), which was featured in See True of the late Inday Badiday, who even agreed to be a "godmother" to the mudfish."

See True was a popular and controversial television talk show that was aired weekly on GMA-7.

Continuing, Alix said, "In one of our conversations, screenwriter Jerry Gracio mentioned to me his short story that was based on that set-up, which won second place in the Palanca Memorial Awards.

"I was immediately interested, as the premise may be based on a peculiar incident but the story deals primarily with the workings of a typical family--the oddity being the son is a fish.

"It will be interesting to explore the relationship of the community as well, within the context of such occurrence which Philippine cinema most often portrays as fantasy.

"The "realness" of the situation will blur the lines between fantasy and reality.

"Genuine tragedies in the world are not conflicts between right and wrong.

"They are conflicts between two rights.

"Cinema can also be like that. It can feel real but also has a sense of fantasy."

SYNOPSIS: A couple, Lina and Miguel, moves into a dumpsite in Malabon from Pangasinan.

Lina, the wife, is desperate to have a child of her own.

Miguel finds a job in the ice factory, while Lina goes with neighbor-scavengers to the nearby garbage dumpsite.

But when Miguel gets sick and loses his job, he joins his wife in scavenging.

Lina finds a burned image of St. Peregrine in the dumpsite and keeps it.

One day, the news spreads quickly like wild fire: "Lina is pregnant!" It was almost a miracle when she finally gets pregnant.

When she gives birth, it is a milkfish.

Strange situations and surreal moments collide in this unconventional family drama that explores the limits of parenthood and innocence amidst the bleakness of Filipino poverty and survival.

CINEMALAYA. What made you decide to field the material as entry to this year's Cinemalaya Filmfest?

"Jerry and I just took a chance of entering it in the Directors' Showcase category.

"We just felt that the 'uniqueness' of the material will be noticed.

"We thank the selection committee for choosing us as one of this year's entry.

"The original story was set in Catmon dumpsite in Malabon. I made sure that I will be true to that.

"The working conditions are very difficult, as it is a dumpsite and there are charcoal pits around the area, but the production felt that it is essential in complimenting the story of the couple: Lina and Miguel.

"It is a perfect metaphor for the seemingly 'purgatory' that the characters' nature will be tested once Lina gives birth to a fish.

"I am basically working with the same staff that I have worked with for my past films:

Screenplay: Jerry Gracio, based on his Palanca-winning short story Isda

LIKE AN AQUARIUM. Are there specific requirements—costumes, visual effects, etc.—for the production?

"As I mentioned, the set-up is rather magical, but I wanted everything to feel real.

"So the costumes, including the choice of locations, are basically as it is.

"The film will follow the characters, as in a stationary canvass, to reveal the portrait of the different characters—showing the development of each of them, as well as the community, in order to emphasize the dilemma and the humanity of concept.

"The camera will gaze through them as they try to survive in their own conflicts.

"It is as if they're in an aquarium, just like the fish."

CHERRY PIE AND BEMBOL. Aside from Cherry Pie Picache and Bembol Roco, who are the other actors in the film and what made you decide to consider them? How do they fit their respective roles or characters?

"The story is like a metaphor to the story of the childless Sarah and Abraham, so the leads are really very important.

"Cherry Pie Picache plays the lead, Lina. I think it is crucial that the actress who will play the mother of the fish will be believable.

"I think Cherry Pie has that quality of being a chameleon. She loses herself to the role.

"She is also a mother in real life, so the nuances that she adds up make Lina's character more heartfelt and human.

"From the very start, after reading the screenplay, I only had one actor in mind, and we were very happy to get him for the role.

"The quiet intensity is what will drive Miguel's character, more so towards the end of the film.

"The other actors who are in the film play the people in the community: Rosanna Roces is Dolor, a woman who has so many children that she is jaded about life; Evelyn Vargas plays Luz, the community's loan shark and is also longing to have a child of her own...

"Alan Paule is Turing, a father who is desparate to keep his child against all odds; Angel Aquino is Cory, a journalist who scooped the story of Lina's son.

TIME LINE. How soon are you going to start production and the time frame for its completion?

"We are currently filming and hopefully we will finish everything before the end of May."

EXPECTATIONS. What are your expectations for your new film?

"I am just taking each day at a time. So far, we are very happy with what we are seeing.

"What is important is to be able to translate this simple story, and hopefully the audience will empathize with the characters."

COMPARISON TO HIS OTHER FILMS. How similar or different is the material from your previous films, like Donsol (2006), Kadin (2007), among others, which have "references" to animals?

"I started my career with Cinemalaya last 2006 with Donsol, a love story set in the backdrop of a sleepy town visited by whalesharks.

"In 2007, I was again part of Cinemalaya with Kadin (The Goat), about an Ivatan boy in Batanes looking for his family's goat.

"It was just a coincidence that this year, Isda (Fable of the Fish) also features an animal.

"I was joking that my Cinemalaya films deal with fauna.

"In the end, it is such that the animals trigger the conflict of a certain community.

"Although in Isda, the fish is the source of the major dilemma of the couple."

GAWAD URIAN 2011 NOMINATIONS. You were honored with nominations for your films, Presa, Muli, Karera, and Chassis. What do you think are the chances of your films of clinching awards in this year's Urian?

"It is always nice to be recognized, but I do not expect.

"I am just proud to have worked with them and our collaboration [also with the production team] is rewarded by such nominations."

What do you think of the Manunuri's decision not to give nominations for mainstream features in the forthcoming 34th Gawad Urian awards?

"At the end of the day, it is always a matter of taste. We should respect whatever films these award-giving bodies cite.

"You do not do your films for the sole purpose of winning awards. The recognition is just a bonus or a pat on the back.

"I am just thankful that the Manunuri chose to look at the independent films.

"In the last few years, the indie movement has been producing interesting and out-of-the-box stories, more than the staple genres of the mainstream films."

Quoting the late Hollywood actor, Heath Ledger, Adolf Alix, Jr. ended the PEP "Q & A" thus: "I only do this because I'm having fun. The day I stop having fun, I'll just walk away."