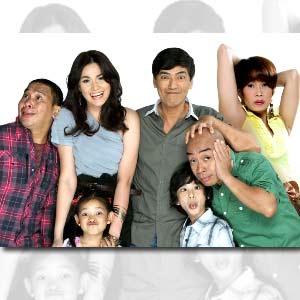 This movie was born out of one of the most interesting showbiz collaborations in recent years, not only of its lead stars Vic Sotto and Bea Alonzo, but also of the studios behind them.

But even with a grand production team and stellar cast, Pak! Pak! My Dr. Kwak remains just a simple Vic Sotto family movie with a clear objective to entertain. Dr. Kwak is the kind of movie you can safely bring your family to watch, without expecting to engage in critical thought or profoundness.

In this movie, 'Dr. Kwak' is Vic Sotto as Angelo, a man who makes a living out of being a fake healer. His fake healing will soon be real when he meets Angelito (Zaijan Jaranilla), a naughty little angel punished and sent to Earth on a mission in order to learn his lesson. Angelo uses Angelito to heal the sick only to earn profit.

Cielo (Bea Alonzo), a doctor, of course meets Angelo's practice with protests. She investigates and tries to report his 'fake healing' to authorities until she discovers that Angelo has a very sick father and he's trying to find cure by himself because past events in his life caused him to lose faith and trust in doctors.

But just like in any Vic Sotto movie, quack doc Angelo and Dr. Cielo fall in love. That's where the madness begins. Aside from their unlikely pairing and Cielo's disapproving mother, their problems worsen when Angelito runs away and gets kidnapped by a person that this mischievous angel had once scammed.

Vic Sotto does fairly well in his brand of comedy, assisted by his two protegés, Jose Manalo and Wally Bayola as his sidekicks in con-artistry Phil and James. But unlike his earlier comedy projects, Vic appears subdued in this movie, leaving most of the wackiness and big movements to his castmates, especially to the hilarious trio of Jose, Wally and Pokwang (who can actually carry their own comedy movie on their own).

The writing of his lines are also a little weak and uninspired, often just uttering lines familiar to the crowd through their noontime dialogues in Eat Bulaga!.

In contrast, Bea Alonzo is effective as the nosy and stiff doctor, and her stunning appearance onscreen is always a plus in her movies. It's amazing how she can act a role depicting any age or level of maturity.

Bea's pairing with Vic is another story. The two seem distant or detached, and so onscreen chemistry is just not there.

The movie could have also added a few more cute moments with more screen-time and interaction between Angelito/Zaijian and Dr. Cielo's little sister (Xyriel Manabat). Children in the audience would find that nice and entertaining to watch. The two children, especially Xyriel, deliver excellent perfomances! It's a waste how a crowded cast with several more cameos drown out what could have been the movie's bright sparks, courtesy of these two young talents.

There are also problems in this movie regarding consistency, especially when dealing with Angelito's powers. It is really not sufficiently explained why Angelito can cure some people, but not others. Moreover, Angelito can escape social workers and can cause police officers to change their mind about jailing Angelo but he can't do the same when he's kidnapped by a group of bad guys.

Pak! Pak! My Dr. Kwak! is not a comedy movie with the story and dialogues as strength. It is more of an ensemble movie, relying on the comedic performances of its cast to deliver the goods.

It's mildly funny, and it gives the requisite "moral lesson" often infused in local family comedies. Still, we wish Vic would soon return and focus the spotlight on himself, which he has been sharing with several performers in his string of recent projects.

Pak! Pak! My Dr. Kwak has been graded B by the Cinema Evaluation Board. It is currently being screened in cinemas nationwide.