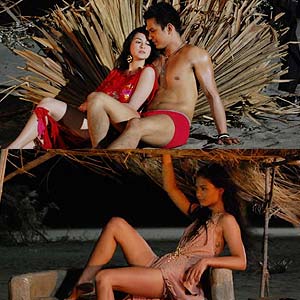 Marian Rivera and Tom Rodriguez (top frame) sizzle in one of the scenes of Temptation Island. Lovi Poe (bottom frame) stands out in this contemporary remake written and directed by Chris Martinez.

Before there was Survivor and Sex and the City, there was Temptation Island.

Temptation Island was a movie released by Regal Films in 1980, starring real-life pageant title holders who tackled roles far from the conventional Pinay beauty queen image. The premise of the movie was simple—they join a beauty contest, their ship catches fire, they get washed off to a secluded island (walang tubig, walang pagkain) and they fight to survive (with each other and with their minds) until they are rescued.

Three decades later, Regal Films and GMA Films chose to remake the Joey Gosiengfiao movie starring four lead stars who weren't born yet when the original came out. The 2011 film stays faithful to the original's plot, just sprinkling some updates in the looks and in the dialogue (sure, they didn't need cell phone 'signal' in the '80s). This results in the film turning out to be an homage, but is that such a bad thing?

The 2011 version stars Heart Evangelista, Lovi Poe, Solenn Heussaff, and Marian Rivera as the beauty queen wannabes fighting for the title of Ms. Manila Sunshine, a model search sponsored by a sun-tan spray. Coming from opposing backgrounds and possessing different personalities, they clash on the island, competing with each other with their dirty tactics and showcasing different levels of sexuality.

These actresses performed based on the roles they were given, and it's difficult not to compare them with their predecessors.

Lovi Poe held her own as the rich, overly confident and sharp-witted brat who often stole the show with her lines. Her dialogue may have been already been delivered excellently in the original but with her husky voice and aloof demeanor, Lovi made the role of Serafina entirely her own. This may have been billed as a Marian Rivera movie but Lovi, an underappreciated actress, did most of the good acting, standing out and invoking emotions—whether love or hate—from the audience.

Heart Evangelista is literally stunning and her looks fit her role as the demure and virginal colegiala aptly named Virginia. But sad to say, she didn't stand out much in the little role and screen time handed to her.

Solenn Heussaff, meanwhile, is obviously a neophyte and appears to struggle in an ensemble of more experienced actors, but she could have performed better in a role other than Pura, the social-climbing spoiled daughter of a debt-burdened family.

Marian Rivera nailed the role that fits her naturally—she is the con artist Cristina who knows how to use her beauty and sexuality to her advantage. In this movie, Marian banks on her strength in playing an exceptionally lovely, yet loud, silly and normal woman.

Another scene-stealer is Rufa Mae Quinto who plays Nympha, Lovi's maid. Most of the movie's laugh out loud moments are care of Rufa Mae and the movie proves she is still very much relevant and funny.

John "Sweet" Lapus remains to be reliable and went beyond being just a carbon copy of the original character Joshua.

The boys of Temptation Island, meanwhile, may have dragged the movie down in the acting department. Tom Rodriguez as Umberto lacks the star factor to match his pair Marian; Aljur Abrenica looks a bit miscast as the rich and smart college rascal Alfred and Mikael Daez, well, being an inexperienced newcomer has big shoes to fill as he portrays Ricardo.

The original Temptation Island garnered a cult following and became an accidental Filipino film classic even without being mind-bogglingly profound or without romanticizing poverty—two most common ingredients in hailed masterpieces of local cinema. Temptation Island was exploratory, fun, and—what's a Temptation Island discussion without this word—campy. It's a film borne out of fantasies and what ifs. The film has left such an indelible mark that the catty remarks and witty catchphrases from three decades ago seem to just have been invented last week.

Temptation Island 2011 certainly looks better, flows more smoothly and delivers the requisite glamour and wardrobe update. Some scenes were recreated frame-by-frame and lines delivered almost in sync with the original scenes (Be sure to catch the end credits!). In fact, this remake is almost too faithful. But that's not necessarily a bad thing, especially in this case where director Chris Martinez is dealing with an untouchable classic.

It is obvious though that the 2011 update is a sanitized version of the original, probably to appeal to a broader audience. This might be a little something fans of the original movie may miss. But they will enjoy the movie, because of its nostalgia and familiarity. Now, those who do not have any idea what Temptation Island is all about may feel a little bit alienated and may feel bitin.

In conclusion, Temptation Island 2011 is much like an inside joke—brilliant and hilarious to those in the inner circle, amusing yet mysterious to those who are not.

Temptation Island will open in cinemas starting this Wednesday, July 6. It is rated PG-13 by the Movie and Television Review and Classification Board.