"Tiyanaks" -- move up the ladder of evolution 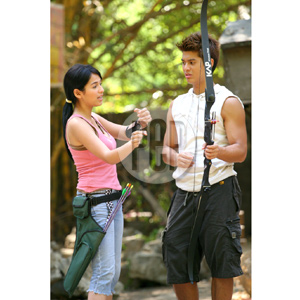 Jennylyn Mercado plays an archery expert who puts her talent to good use in the film Tiyanaks. JC de Vera (right) is Jennylyn's love interest in the film, besides Mark Herras.

Capitalizing on Filipinos' affinity for children, Regal Entertainment's Tiyanaks turns this endearing quality into a weakness that dooms those who cannot see the evil behind the façade of an innocent child.

In Filipino folklore, a tiyanak is a mischievous goblin that is believed to be the incarnation of an unbaptized child.

Almost two decades ago, the same movie outfit created the original Tiyanak movie that scared the wits out of expectant mothers and fathers and probably hastened the baptism rites of many children in the country. Of the original cast members of Tiyanak, only Lotlot de Leon was chosen to participate in this horror flick that features not only one but several demonic creatures.

Shot in Daranak, Tanay, Rizal, Mark Reyes's film has the right elements of a creepy tale—a thick forest, rushing waterfalls, and a secluded house that contains as many mysteries as its caretaker Aling Mildred (Lotlot).

A Campus Ministry adviser named Shiela (Rica Peralejo) leads a group of students for a retreat during the Holy Week, but, instead, she leads them to their deaths when they anger the tiyanaks. From being an innocent looking baby, the tiyanak have now grown to be young children but no less ferocious. In fact, they have now evolved to have the ability to swim and fly as well.

Of particular interest is Mika dela Cruz, one of the tiyanaks who can shift gears from being a mortal threat to a pitiable-looking child within moments.

Prof. Earl (TJ Trinidad) is a teacher of Filipino folklore who comes face-to-face with the very creatures that he teaches about in class.

The tiyanaks have evolved not only in terms of abilities but in appearance as well. The problem with CGI (computer generated images) is that the actors do not have something tangible to work with so their reactions to the tiyanaks are not that genuine. If the characters themselves are not terrified by the tiyanak (supposedly) in front of them, then the audience certainly won't feel that terror while watching the scene.

A case in point would be the confrontation scene between a tiyanak and Mark Herras. StarStruck's Ultimate Male Survivor was seemingly not threatened by the non-entity before him, so the audience wasn't frightened by the creepy creature at all.

Still, Mark did well in his moments with Jennylyn Mercado and even though the two now have separate love interests in real life, they can still elicit "kilig" moments that will genuinely be appreciated by their fans.

Tiyanaks is a bit predictable, especially when it comes to choosing who will survive or not, but there is a surprising twist in the end that makes it just as worth watching as the original horror flick that had viewers screaming, "Ang anak ni Janice!"