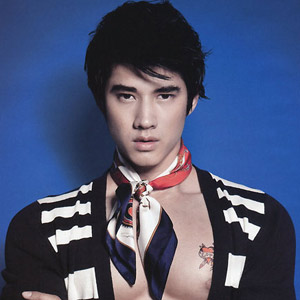 If the deal with Star Cinema pushes through, Thai heatthrob Mario Maurer may shoot scenes of his movie here in the Philippines and in Thailand.


When PEP.ph (Philippine Entertainment Portal) asked Roxy Liquigan, ad prom director of Star Cinema, ABS-CBN film production arm, regarding the possibility of Mario doing a movie here in the Philippines, he revealed, "There are ongoing talks."


Will he shoot his scenes here in the Philippines? "Meron dito and meron din sa Thailand."


Have they already chosen a leading lady for the Thai actor? "Sa September pa mafa-finalize ang lahat, including the schedule," explained the Star Cinema executive.

Mario's good looks and boyish charm in the Tagalized version of the film Crazy Little Thing Called Love captured the hearts of Filipino viewers when it was aired on last June 5. In fact, when the movie was aired on ABS-CBN on that Sunday morning, it earned a rating of 18.8 percent nationwide, according to data from Kantar Media.

Mario has a German father and a Chinese mother. He started modeling at age 16 and hasn't stopped since then. In 2007, the acting bug bit him and he starred in his first film Love of Siam, which earned for him a Best Actor trophy in the Southeast Asian film category of the 10th Cinemanila International Film Festival.

And in 2010, Mario had a plum role in the international hit Crazy Little Thing Called Love.

E-Live caught up with him during his pictorial for a Filipino clothing brand. Mario was spotted talking with the StarAd Prom specialist Mico del Rosario and director Enrico Santos.


In an interview aired during the August 6 episode of Entertainment Live, Mario admitted, "My friends told me they have friends in the Philippines and they liked the movies Love of Siam and Crazy Little Thing called Love. And I heard they changed my movie and I speak in Tagalog."

He added, "I know that the Philippines is very nice. The people are very nice too. I want to go there first and meet my fans. I would like to take a vacation and maybe go around. I would like to go to Manila."

Mario is very appreciative of his Filipino fans who send nice messages to him via Twitter. He pointed out, "It's very important for me to interact with my fans because I have friends in the Philippines, Korea and China so I think I want to be close to them. I want to get to know them and talk to them. Tell them what I do...there are many fan clubs [who are] Filipinos."

What is his impression of Filipino girls?

"My friend told me they're very cute and very nice," he said with a smile.

Star Cinema executives gave the model-actor a miniature jeepney, which he looked at with amazement. He described it as a "a very big tuktuk," referring to the common mode of transportation in Thailand.