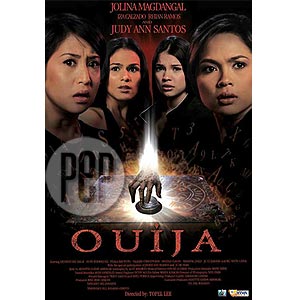 Four girls—played by (from left) Jolina Magdangal, Iza Calzado, Rhian Ramos, and Judy Ann Santos—are haunted by a vengeful ghost from Camiguin in the movie Ouija.

When Ouija opens in theaters nationwide this Wednesday, July 25, it just might dissuade people from using the Ouija board, commonly referred to as the "spirit of the glass," because of its possible consequences.

A Ouija board is a medium through which messages are supposedly communicated by the dead to or through the players of the game. The playing pieces consist of a game board and a pointer, called a planchette, which is usually made of glass. The game board has all the letters of the alphabet written on it. The numbers 0-9 are also usually included, along with "Yes" and "No" spaces. The players invoke a spirit to enter the glass pointer and answer their questions by moving the planchette to spell out the answer.

In this horror movie directed by Topel Lee, half-sisters Aileen (Judy Ann Santos) and Romina (Jolina Magdangal), along with cousins Ruth (Rhian Ramos) and Sandra (Iza Calzado), reunite in Camiguin to bury their grandmother. Accompanied by Sandra's friend, Lucy (Desiree del Valle), the girls dare to call on the spirits of the dead when they find their old Ouija board from when they were kids. The Ouija board is burned by accident before they are able to finish the ritual, trapping a murderous entity around them.

As they begin to realize the terror that they have brought upon themselves, Aileen and Romina's hostile relationship becomes even more strained, while Lucy's sanity brings a heavy burden on Sandra. Meanwhile, Ruth's boyfriend, Gino (JC de Vera), is unknowingly pulled into the danger and horror that await all of them.

Confronted by imminent death, the girls have nowhere to go unless they can identify the spirit and find out where it is buried. It is only by leading the spirit to its burial ground that they will be able to release the spirit from the Ouija board and survive its final haunting.

Based on a National Geographic documentary about a British family that used an Ouija board the wrong way, Ouija aims to enlighten viewers on what to do in case you anger a spirit while playing this game.

A sub-theme running through the story is the anger of Aileen towards her half-sister Romina. Aileen blames her half-sister for breaking up the marriage of her parents when Aileen's dad left them for Romina's mother.

The deadly crisis forces the two mortal enemies to work together to find a solution to the problem—before all of them get killed.

Judy Ann gives a restrained performance, embodying a woman who struggles with her fears but gives an outward appearance of being strong for the sake of others. It is easy to emphatize with Jolina as she seeks the acceptance of her half-sister. Iza stands out for her portrayal of a self-assured woman who uses her beauty as a means to an end. Rhian didn't have to deviate much from her own personality as a young, carefree girl, and so her portrayal of the role came naturally for her.

The horror sequences are testament to director Topel Lee's originality and creativity. Granted, there are traces of influences from popular horror films but combined with the fertile imagination of Direk Topel, his mastery of the horror genre still shines through. Magda, the contortionist ghost in Ouija, is bound to leave lasting memories of dread and fear on the viewers.

This co-production of GMA Films and Viva Films is rated PG-13 by the Movie and TV Classification Board and has been graded "A" by the Cinema Evaluation Board.