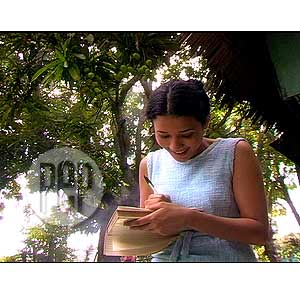 Karylle, who is best known for being part of GMA-7's Encantadia and Moments of Love, stars in her first indie movie that is now showing at the Cultural Center of the Philippines. Ligaw Liham is directed by Emilio "Jay" Abello VI.

Ligaw Liham, which can literally be translated as courtship through letter writing, is a concept that is becoming obsolete with the influx of modern technology. The convenience and speed of using email and cell phones to communicate with others contribute significantly to the decline of snail mail.

DEAD MAIL. It feels great to receive a handwritten letter that shows the thoughtfulness of the letter writer. However, what happens when the letter that you have been waiting for is delayed, or worse, doesn't arrive at all? According to director Emilio "Jay" Abello VI, this thought triggered him to co-write and helm the project Ligaw Liham.

He narrates, "Two and a half years ago, my family had a family reunion in Silay, [Bacolod City]. My cousins from Germany went home. It was Christmas. One month sila doon and they started writing their friends, their families, their cousins, their classmates. They went back to Germany two months after. None of their letters arrived.

"They asked my Tita, so she went to the post office and found out that there's an anomaly in the post office. Then they're making kuwento, very trivial lang. Sabi ko, ‘What happens to the letters? Do people still write letters?'

"What happens to the letters, physically, saan napupunta kung hindi name-mail? This created the love story," he explains.

When PEP asked the director to explain why he chose Karylle to play the lead role of Karen, he did not hesitate to say that "she's not only pretty or beautiful outside, but I like [her] conservative image. I think it's very pure.

"I wanted her to play a mother—a girl that embodies the perfect mother. Somebody you could trust [even] if the husband is away, overseas, walang worry about not taking care of the house, not taking care of the children na naiwan. Or even infidelity. You just completely trust. That's how I see her," says the director.

Karylle stayed in Bacolod for one week to shoot the indie film. She reveals that she had initially declined to do the project because of conflict with her schedule. "Nahindian ko na ‘tong project na ‘to pero bumalik siya sa 'kin. Hindi nag-fit sa schedule at hindi sila maaring mag-change ng schedule because nga of budget constraints. Pero nung naayos nila, nasabi ko na it must be a sign na kailangan kong gawin."

The director described his work experience with Karylle as being "very, very nice. She's such a trooper. Grabe. Sobrang, sobrang dali. But I knew that already from the start. I asked my friends [from] GMA and sabi nila, ‘Jay, panalo yan, you'll have no problems with her.'"

Ligaw Liham had its premiere at the Cultural Center of the Philippines last Saturday, July 21. It is one of the eight films in the running for the full-length feature competition of the 2007 Cinemalaya Philippine Independent Film Festival. It will be screened at CCP on the following dates and venues:

Visit www.ligawliham.com for more information about the movie.