PEP REVIEW: The Road presents a portrait of a psychopath 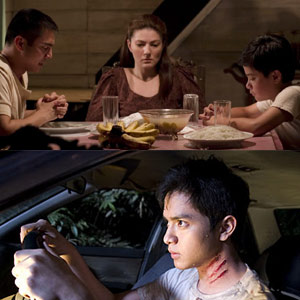 The Road, directed by Yam Laranas, features a mix of promising tween stars Alden Richards (bottom frame) and Renz Valerio (top frame, right) as well as seasoned actors Marvin Agustin and Carmina Villarroel. The Road is a grisly film involving three unsolved crimes that all take place within a span of 30 years. As the narration unfolds, details about the killings point to a macabre and disturbing truth about the root of the crimes.

Yam Laranas' latest suspense-thriller, The Road, takes place in a secluded and haunted dirt path where three murder cases occur. The three unresolved crimes unfold in a timeline that stretches on for 3 decades. The story begins in 2008, later moving a decade back into 1998, and later into 1988. As the plot noticeably runs backwards, details of the killings connect the mishaps together, providing clues that delineate a horrid and disturbing tale.

Rather than conventionally applying the classic whodunit tale, Laranas amplifies the suspense with a whydunit, triggering the audience to ask why the victims are haunted, tortured, and eventually killed.

A key to this are the subplots, the three crimes that comprise the main mystery of The Road, each time explaining how the earlier crime led to the other.

The main narrative opens in 2008 as three teenagers (Barbie Fortaleza, Lexi Fernandez, and Derrick Monasterio) sneak out one night for a joy ride. They find themselves entering a solitary, unlit rough road, its mystery unknown to them. As the three drive further along the winding path, they find themselves getting lost. Moreover, a mysterious red car keeps coming out of nowhere and challenging them to a dangerous race.


The first part of the movie provides a creepy atmosphere made all the more menacing by the gruesome presence of two bodies.

The second subplot, set in 1998, offers a brilliant interplay of light and shadow. Golden sunlight bathes the long stretch of a deserted road where a lone car is passing by. Two sisters (Rhian Ramos and Louise delos Reyes) happen to be inside the car that suddenly overheats and stops. They ask help from a shabby looking young man (Alden Richards) who leads the two to an old, unkempt, and tattered house. Sensing the oddity about the young man, the sisters attempt to get away from him but end up being abducted and held prisoners in the dilapidated house.


Alden's smooth complexion and angelic face is in sharp contrast to his sadistic character.

The third plot, set in 1988, takes the audience to the same house when it was once tidy and inhabited by a family, including a cruel and verbally abusive mother (Carmina Villaroel) who punishes her son (Renz Valerio) for minor offenses.

The family has its strangeness to it. The father (Marvin Agustin) is introduced as a kind of missionary/preacher who often comes home to his son locked up in a cabinet. While he is aware of his wife's inhumane punishments to their son, the father does nothing. He seems to be afraid of his wife's innate wickedness and at the same time fears that she might leave him and his son. To him, a marital bond cannot be broken.

The family's issues start to surface as the scenes progress. The fresh-faced Ynna Asistio is cast as the young laundry woman who makes an attempt to befriend the lonely young boy.

Seeing her son interacting and playing with the laundry woman is enough to send the mother into an outrage. A totally different Carmina can be seen on the big screen as she sets aside her bubbly image to portray a cold-blooded woman.

Fast forward to the 2008 crime, the meritorious provincial cop Luis (TJ Trinidad) is tasked to solve the crimes of the mysterious road.

Before receiving the assignment, Luis is approached by a mother (Jaclyn Jose) whose two daughters have been missing for about ten years now.

As the subplot reels, providing snippets and fragments from the three crimes, the audience becomes privy to the details that link one to the other.


UNCONVENTIONAL MOVIE. What makes Yam Laranas' film an unconventional horror flick is that it puts effort in leaving disturbing ideas in one's head rather than aiming to shock or surprise an audience with hokey scenes of ghosts appearing point-blank.

The Road also toys with the idea of sadism and madness as it places the character of a psychopath at the core of the main plot. If the narrative were to be simple and linear, it would have basically demonstrated how a sadist turned out to develop a desire or pleasure from the torture and suffering of other people. Laranas' film becomes more effective in that sense, more so by the masterful cinematography that heightened the suspense and the horridness of the scenes.


Direk Yam, who also served as the cinematographer, uses unusual camera techniques to move the story along.


The buildup to the conclusion is slow but made even more haunting by the musical scoring of The Road, provided by Swedish composer Johan Soderqvist.


While the film succeeds in evoking terror, it fails to smoothly establish how some details end up in the subplots.

Continuity errors also plague the movie. In one instance, TJ's character enters the house during the daytime but when he comes out just a few minutes later, it is already nighttime.


There are a few other holes in the plot but pointing them out would be revealing too much.

As a whole, one could relish the finely shot scenes of The Road and later at night be bothered by the idea of psychopaths and parents gone eerily cuckoo.

The Road succeeds in imprinting gruesome images in one's head as it leaves the task of frightening a person to his imagination.

Produced by GMA Films, The Road is graded B by the Cinema Evaluation Board. It is currently being screened in cinemas nationwide.