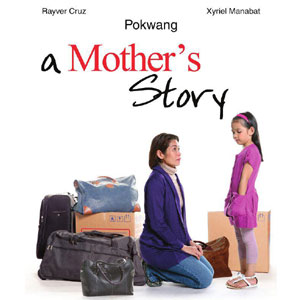 "Kahit kailan di ko kayo inabanduna... Hindi ako masamang ina." At the core of Director John Lazatin's realistic drama is the painful sacrifice that Medy (Pokwang) makes to fend for her two children. The film illustrates every overseas working mother's journey that's filled with hardships, difficult decisions, and triumph. Graded A by the Cinema Evaluation Board, A Mother's Story is the launching film of comedienne Pokwang (left) as she puts comedy

What is a mother made of?

In John Lazatin's film, the character of the mother is one of compassion and inner strength. In struggling to raise her children, she will do everything to ensure their survival. They are her driving force.

In A Mother's Story, Medy (Pokwang) is confronted with the most difficult circumstance that any parent can be put in: to work abroad and earn money at the cost of leaving behind her children and giving up her physical presence in their lives. It is a tale of a heartbreaking sacrifice that strikes a chord among parents, with mothers mostly.

What makes Lazatin's film of relevance is that it illustrates how a Filipino with an obligation to raise a family is pushed to labor overseas because of financial adversity. Medy's character is even made complex by her illegal status, thus prying open the predicaments and perils of the "TNT" (Tago Nang Tago) or the Filipino migrant in hiding.

A Mother's Story portrays to the family members left behind in the country, the kind of life that their loved ones live abroad--the emotional pining for home and the physical labor that their jobs entail.

The film also depicts the impact of overseas working within Filipino families and the relationships that are compromised and damaged due to the physical distance and emotional disconnection between family members.

More than its portrayal of the OFW, the plot succeeds in unraveling Medy's journey as a mother of two who mainly wanted to provide for her kids while she worked as a makeup artist for a celebrity. Medy is shown to be optimistic and strong-willed despite being broke and receiving no help from her incompetent husband, Jerry (Noni Buencamino), who squanders her earnings in gambling.

After giving birth to her second child Queenie (Xyriel Manabat) who is born with a respiratory ailment, Medy is given a shot to work abroad for a week. Thinking of the money she will make in order to avail of medication for her newborn, Medy agrees to be a part of her employer's entourage. Before leaving, she promises her first born, King (Rayver Cruz), that she will be back in a week. Little did Medy know that her seven days will stretch on for seven years.

While abroad, Medy bumps into Helen (Beth Tamayo), a friend she has not spoken to in a longtime. Helen encourages Medy to stay and offers her friend a job. Medy refuses and dissents working illegally. She says that her conscience cannot bear it and that she cannot manage being away from King and Queenie. What changes her mind is a phone call she suddenly receives from Jerry—her month-old baby needs to be operated right away, urgent money is needed.

Left with no choice, Medy considers Helen's offer and steals away from the group she originally left the Philippines with. Her dire need for money compels her to obtain employment as a front desk assistant in a small school, and later, because it pays higher, as a housekeeper in an American home.

While the plot basically occurs in present time, Medy coming home to her family after seven years, it also retells the hardships she experienced through flashbacks. The film ardently presents the situations in detail, made even more emphatic by the simple but forthright screenplay conveyed by an efficient cast.

Pokwang's heartfelt performance as Medy transcends her comedic prowess. While the actress' knack for delivering punch lines is apt for Medy's candidness and comical antics, the character's agony in diaspora is brought to life when the audience witnesses Pokwang in the thick of the drama. Her real to reel acting communicates the pains of a mother, most poignantly when she comes home to find that after all the sacrifice, her children have become estranged to her. King, who by now has finished college, has held a grudge against his mother for breaking a promise seven years back.

As the plot unravels the flashbacks, Pokwang as Medy makes the OFW's predicament comprehensible to the point of making an audience undergo the emotional suffering of her character. She is able to portray Medy's helplessness as she is alienated from and harshly treated by her employers.

One of the most remarkable scenes is when Medy confesses the toughest part of her experience to her mother (Daria Ramirez), the very person who urged her to be practical and to get a job in the United States. The audience learns how her employers treated Medy like a slave, shut off from the world. This is made worse by the fact that her only connection to her family is Helen, who although makes sure her salary and balikbayan boxes reach the Philippines, steals from Medy's pay.

To come home to a family who has forgotten her and equated her value in their lives in the balikbayan boxes she sends, is perhaps the most tormenting predicament in the story. How she manages to stitch back the loose ties of her bond with her children is the endearing portion of A Mother's Story. It is how she makes them understand her side, while apologetic for her absence while her kids were growing up, that moves the audience.

More than a tearjerker, A Mother's Story is an empowering tool for every Filipino who has, in one way or another, experienced the impact of migration and overseas working.

Graded A by the Cinema Evaluation Board, A Mother's Story is currently being screened in Philippine cinemas.