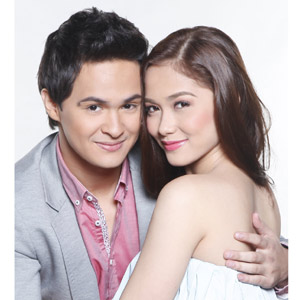 In My Cactus Heart, Maja Salvador acts opposite her real-life boyfriend Matteo Guidicelli. Maja is cast a young girl who is a notorious heartbreaker while Matteo plays a young man who will do anything to capture her heart.

The romantic film My Cactus Heart is Star Cinema's first offering for 2012.

My Cactus Heart tells the story of Sandy (Maja Salvador), who does not believe in love, and chooses to break as many hearts as she can. She then meets Karlo (Matteo Guidicelli), a singing waiter, who convinces her to take a shot at romance.

It is undeniable that the two leads, played by real-life sweethearts Maja Salvador and Matteo Guidicelli, have infectious chemistry. The two light up the screen whenever they are in the frame, and their presence makes the story of found love believable.

Maja is lovable as Sandy, who should have been characterized as a mean girl but was instead shown to be sweet and endearing. Matteo, on the other hand, is charming as Karlo, a humble young man who says his Tagalog lines stiltedly, playing up the appeal of an almost-foreign accent.

The problem with My Cactus Heart is that too many subplots are added to the batch, complicating Sandy and Matteo's love story. Sandy's father left them when she was young. Karlo has an absentee mother. The bank can take Karlo's house at any time. All of these stories are developed, then droppped when the film reached its conclusion.

My Cactus Heart also tries to capture the current era by toying with recent trends in cinema, like found footage, animation, and sped up and over-the-top scenes. What it does is admirable, so it is a pity that these only existed in the film's first half.

Behind all the cheesy lines and romantic gestures, My Cactus Heart delivers profound thoughts about relationships. Love may be thorny and painful at times, but once you're willing to be stung, the payoff is definitely worth it.

In the end, My Cactus Heart is a sweet film that delivers some good laughs at times. If you want to see a romantic film early this year, then this film is for you.