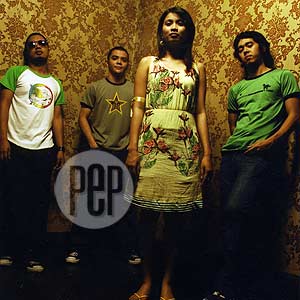 Moonstar 88—the pop-alternative unit known for radio hits such as "Torete," "Sulat" and "Sa Langit," among others—rose from its long slumber from mainstream action via its third studio album and first under Sony-BMG Music Entertainment titled, Todo Combo.

Everything's a fresh start. Aside from having a new record label, the band is also parading a new lineup with Maychelle Baay (vocals/guitars) filling in for the slot vacated by former vocalist, Acel Bisa, while Bon Sundiang now pounds the skins replacing ex-drummer, William Pineda.

Original members, guitarist Herbert Hernandez and bassist Paolo Bernaldo, both echoed that the three-year album gap made everyone eager and itching to record a bunch of new materials to formally open Moonstar 88's new chapter in its colorful history.

"Todo talaga 'yung album," enthused Herbert, "It has been three years [since] we've been brewing this so we're really confident with how the album came out."

Although the band's lineup at present is very different, listeners can still expect Moonstar 88's trademark of fusing pop and rock loaded with infectious melodies laced with honest lyrics.

With a new album, new set of songs and a new home, the hardworking quartet is gearing up for busy days once more.

"But we're really very happy and proud of this record. Everything would be worth the effort," smiled Maychelle.