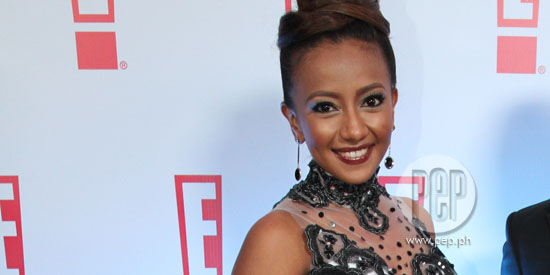 After leaving a mark with her first digital album released in 2011, Liezel Garcia is ready to introduce her first physical album under Star Records.

Liezel has come a long way from being a former receptionist and executive secretary in a luxury car store in Dubai. She emerged as 4th star dreamer of Pinoy Dream Academy Season 2.

As a young singer, Liezel used to compete in contests performing songs by Regine Velasquez, particularly “Ikaw,” and some of Jaya's hits.

She was also inspired by Mariah Carey, Whitney Houston, Celine Dion, and more recently by Beyonce.

The single “Dance With Me” is the most upbeat in the roster and the most in line with her style, which is R&B-pop.

But because of the huge success of “Gisingin Ang Puso,” the company was prompted to come out with a physical album containing ten songs. It is set to be released this September.

TELESERYE THEME SONGS. ”Gisingin Ang Puso” garnered much popularity when it was used as a theme song for the South Korean fantasy drama 49 Days.

The show was re-titled Pure Love for its local airing on ABS-CBN’s primetime block in 2011.

The song instantly became the most downloaded track in Star Records’ online catalog, an achievement that Liezel is very proud of.

The single "Ngayong Alam Ko Na” is also being used as a theme song for Two Wives, another South Korean family drama that currently airs every morning on ABS-CBN.

With two successful teleserye hits, Liezel is now being dubbed as the “new voice of ABS-CBN teleserye theme songs.”

How does she feel about this title?

When asked to name her favorite song in the new album, Liezel said it is still “Gisingin Ang Puso.”

IN LOVE WITH BUGOY DRILON. It can be said that Liezel is far from being “bigo” when it comes to love.

How is it working for her, as a singer, being in a relationship with a fellow singer? What are the advantages and disadvantages?

Bugoy has two successful albums under his belt—Paano Na Kaya (2008) and Bugoy (2010). The latter contains several tracks that were also as teleserye theme songs such as “Hindi Na Bale” in Tanging Yaman (2010)

Liezel was paired with Markki Stroem, who also happens to be a singer, on the show.

Does this mean that Liezel would now shift the direction of her career towards acting?