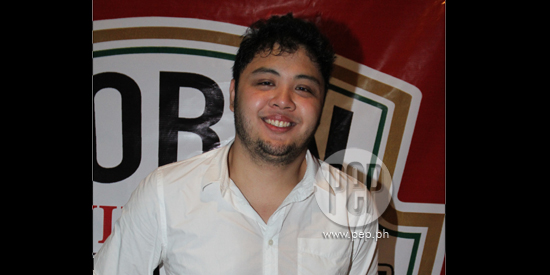 Robin Nievera will topbill The Nightmares concert to be held this Saturday, March 2, at Teatrino Greenhills. He will have Zia Quizon, The John Sung Band and The Walkie Talkies as his special guests.

Robin Nievera will topbill The Nightmares Concert, which will be held this Saturday, March 2, 8pm at Teatrino Greenhills. He will have Zia Quizon, The John Sung Band and The Walkie Talkies as special guests.


Playing to an intimate audience and making music on his own terms seems to be the perfect opening salvo for Robin Nievera's concert career.


As the son of Concert King and Queen Martin Nievera and Pops Fernandez, Robin is no stranger to the spotlight. In 2010, Robin was one of the 3 winners of the MYX VJ Search. In fact, the younger Nievera has already released two albums: Overwait released in 2012 and self-penned and self-produced second album titled Nightmares.


Both Martin and Pops are excited for Robin. The 26-year-old musician recalls that he first saw his dad Martin perform during a sold-out concert held at Ultra. "Both my parents are concert freaks and even solo or together or with other guests they are excellent at what they do," Robin proudly remarks.


What is the concept for Robin's first solo show?


Robin says that the concert is based on his sophomore album, Nightmares, which he released for free in December 2012 via his website robinnieveramusic.com.


Concert Queen Pops serves as a producer of The Nightmares Concert.


Robin reveals, "I guess my mom liked the songs and the album and she said you need to have a concert. So she planned out going to Teatrino, paying the downpayment. With everything else she said: 'You fix it, you pick the songs.'"


He is very down-to-earth, admitting that on the day of his upcoming concert, he will be there from 9 am "until you guys leave and then we will be taking down everything pa..."


Robin also explains that the songs he included are culled from both his first and second albums as well as covers of songs "that you normally wouldn't hear and I will be collaborating with all three performers. We are trying to make it a very different concert and show off more talent than production because we are on a budget."


Robin jokes that the lights will be so-so, that it won't be flashy, and since the band singing and performing with him are all classmates who took up music with him in College of St. Benilde. "We are going to be setting up, dismantling, doing everything ourselves and we are going to be tired that day..." explaining why he will be at the venue as early as 9 am on March 2.


This concert has taught him how to get sponsorships and approach people and companies to partner with him. He says, "Viva helped with rehearsals but I put the songs together. I'm trying to direct everyone musically..." His parents, of course, gave their input as Robin admits, "My mom and dad are bugging me, 'What's your script like?' And I said I don't like that, I don't like preparing."


He feels he works best under pressure because ideas flow more during this time. He also takes a very modern approach, preferring to use Twitter and social networking sites over more traditional routes of promotion. Robin points out, "We even took our own poster picture. We saw something that's like, this looks emo, let's do this. We did a Harlem Shake video to promote the whole show and we got my brother to dance there. We are trying so many things and we are trying to market it and see how far we can go with social media and how this can help."


Robin wants his concert to be "a very settled down, subtle acoustic kind of thing," since he is performing with people who are his friends and usual companions at normal gigs. The only difference is that since it's Teatrino, it will be more "parang sosyal lang na gig, pero it should be fun and it's not a rock concert."


Indeed, with songs from his album Nightmares, concertgoers will be in for a treat since it will highlight more of Robin's soulful voice, his broad range of songwriting, and even skillful guitar playing.


He says that people should also expect to "get sarcastic remarks from me, and that I make fun of the music industry, I do, I will be making fun of my parents but not in a derogative way, I will say something funny, people will laugh but it is still respectful. I will have no script. It will be like we are having fun."


Zia Quizon will be his "surprise special guest" during his concert. Robin emphasized the word surprise since word got out so early that she would part of The Nightmares Concert.


Robin says about Zia: "She was my first choice, she invited me to her concert when she was promoting her first album before..." The two are also very good friends, doing gigs together, and his band is very familiar already with her set of songs. Robin mentioned that they also share a love for Nat King Cole and that he gave Zia freedom to perform anything she wants.


He is also very happy with the participation of The Walkie Talkies, a sister act acoustic band and The John Sung Band, an indie folk band that recently made waves in Twitterverse thanks to Anne Curtis tweeting about them. The choice of his guest performers are very telling on the kind of musical show imprint Robin wants to leave upon concertgoers.


Major concert or not, this is Robin's first foray into doing a solo show. He says that he knows the feeling of singing in front of a huge crowd, having performed on stage with his parents to a sold out Araneta crowd and the feeling of singing in front of two people in a bar. He shares, "it's just a matter of...it's a lot of pressure. It's not just my first concert, it's the first time I'm trying to produce it."


The Nightmares Concert officially kicks off Robin's Asian tour from March to April, with stops in Hong Kong, Singapore and Japan. Having recently signed with Viva Artists Agency, Robin will also appear on a music show for the Viva cable channel featuring talented and new artists in the Philippine music scene.

IS ROBIN NIEVERA BIOGRAPHY PATTERNED AFTER HIS PARENTS' LIFE STORY?

There's more to Robin Nievera's biography aside from being the son of famous concert performers, Pops Fernandez and Martin Nievera. He is a staunch advocate of OPM music, and veers away from his parents’ music genre. The 27-year-old musician said in his interview with Dolly Anne Carvajal, "My dad and I have a lot of the same musical inspirations, but we don’t belong to the same genre as artists. It’s guitar-driven and musically intense. That’s pretty much how I would write my songs today..."