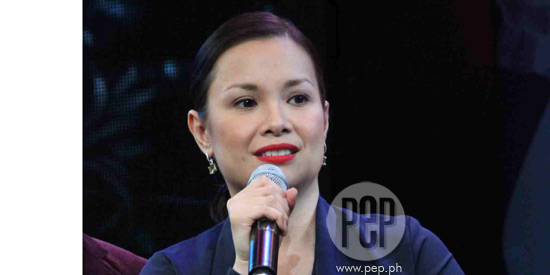 Lea Salonga (in photo) is the MYX Magna Awardee of the 2013 MYX Music Awards. Sarah Geronimo was unable to attend the awarding ceremony held at the Music Museum last March 20.


The trophies were given to the winners from 18 various categories while the MYX Magna award was bestowed to the Filipino global artist, Lea Salonga, handed by MYX Channel Head Andre Allan Alvarez.


Prior to this, Julie Ann San Jose, Erik Santos, K-La Rivera, Juris, Richard Poon, Nikki Gil, Christian Bautista and Rachelle Ann Go, amazed the crowd as they paid tribute to Lea. In their production number, they sang their own renditions of "I Am But A Small Voice," "A Whole New World," "We Could Be In Love," "Reflection," and "Sun And Moon," which Lea popularized in the popular musical Miss Saigon.


These artists celebrated Lea’s achievements by singing "Tagumpay Nating Lahat" all together.


Lea was surprised and overwhelmed witnessing country’s quality artists singing her songs. “All they told me was I would just receive this trophy. They did not tell me that eight of our country's brightest and best singers would be singing my music, and with all due respect to the people at MYX, I think the biggest reward I got tonight came from these eight incredible people who more than did justice to my music,” she said.


The singer-thespian also pointed out that passion is the biggest factor for an artist to excel in the business. “You have to love this more than air, more than food, more than sex. All I'm saying is that it has to be a basic need as what can make you survive as a human being.”


According to ABS-CBN, the MYX Magna Award is given to an icon who established an image and sound of Filipino music, not only in the Philippines, but also abroad.


Top awards also went to Sarah Geronimo as she was named Favorite Artist while Abra’s “Gayuma” with Thyro and Jeriko Aguilar was chosen as the Favorite Music Video of the Year.


The event was hosted by MYX VJs Iya, Nikki, Chino, Michelle and K.A. while celebrities served as presenters.


Here is the complete list of winners at the MYX Music Awards 2013: