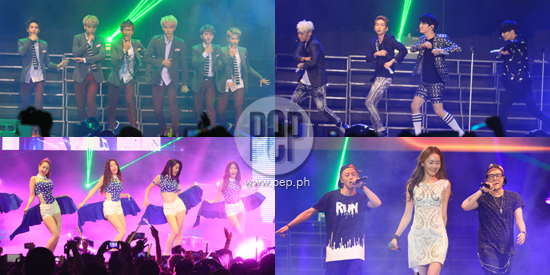 The Philippines has emerged as a destination of choice for Korean artists. This was proven yet again when four Korean acts performed at the Smart Araneta Coliseum last Saturday, September 9. Crispi Crunch (along with Soo Min of April Kiss), Dal Shabet, EXO-K, and SHINee performed live for their Filipino fans for a one-night only concert. The concert was organized by All Access Productions and Ju Entertainment.

Before the concert, a press conference was held at Gateway Mall Cinema 4 to introduce the Kpop groups to the local media. Radio DJ Jinri Park hosted the press conference and also acted as their translator.

CRISPY CRUNCH AND SOOMIN. First up on the press conference was the K-Pop duo Crispi Crunch and Soo Min. Crispi Crunch is composed of Park In Yeol (also known as CSP) and Lee Sang Hak (more popularly known as Cheezy). Meanwhile, Soo Min is the leader of the six-member girl group April Kiss.

This is the group’s first visit to the Philippines, which is why they are eager to try Filipino dishes. Jinri asked the members what food they wanted to try and Cheezy answered, “We haven’t tried it but we are going to try this balut after the concert."


(L-R) CSP, Soo Min, and Cheezy during the press conference of KPop Republic

When asked how it tasted, CSP replied “Very delicious!” when paired with Korean soju (rice wine). Aside from balut, the K-pop duo shared that they like the country’s local beer.

After doing the concert, Crispi Crunch and Soo Min will stay in the Philippines for a few more days to promote their upcoming single “ODL (One Day Live).” The group has been busy promoting by appearing in local TV shows such as GMA-7’s Sunday All Stars and Walang Tulugan with the Mastershowman, ABS-CBN’s Umagang Kay Ganda and MYX.

Cheezy said, “Right now, we came here to the Philippines to promote our new up coming single at the end of this month called ODL One Day Live.”

To end their segment, Cheezy greeted the media and fans inside the cinema in Tagalog by saying: “Kamusta kayong lahat? Walang tulugan everybody!”

Ji Yul acted as the group’s spokesperson because she speaks English fluently. Ji Yul shared, “This is our second visit to Philippines and we were in Cebu to take pictures.

“All of our members were so inspired because Philippines is so wonderful.

However, this is the first time for Woo Hee to visit the country because she was not yet part of Dal Shabet when the group went to Cebu. The 21-year-old singer would also like to visit Cebu for a vacation.

She added, “I like Cebu’s earth nature, so I wanna go.”

Radio host Jinri Park also asked the members which place in the country they would like to visit next. One of Ji Yul’s Filipino friends tricked her and said that they should visit Farmer’s Market in Cubao to really experience Philippine culture.

Ji Yul shared, “I have two Filipino friends, and they told me that you have to go to Farmer’s Market, Cubao. Is it right?

“And they said, if you go to Farmer’s Market, you can feel the Philippines. Is that right?”

The members of the girl group disclosed that they would like to visit Palawan or Boracay for a vacation.

Towards the end of their press conference, Ji Yul graciously thanked their Filipino fans for their continuous support for their group.

The 22-year-old singer said, “Thank you for inviting us, and thank you for loving us Dal Shabet.

“I love the Philippines I don’t want to go back and all of us want to keep in touch on SNS [social networking sites].”

EXO-K. The boys of the Korean sub-unit of EXO definitely made a mark on their Filipino fans. Muffled screams and giggles filled the air when they arrived at the press conference. EXO-K is composed of Park Chan Yeol, Su Ho, Oh Se Hun, Kim Jong In (a.k.a. Kai), Do Kyung Soo, and Byun Baek Hyun.

This was the group’s second visit to the Philippines. The first one was in January 19 where they performed with their Chinese counterpart, EXO-M, for the Dream KPOP Fantasy Concert held at the SM Mall of Asia Concert Grounds.

Oh Se Hun described the Philippines as a “beautiful country” and said that the country became more beautiful on their second visit. Sehun also shared that their group appreciates the warm welcome that they received from fans during their arrival earlier that day.

When asked what name they would like to give their fan club, Chanyeol answered that the fans should decide themselves since it belongs to them.

Jinri Park asked the members of EXO-K which place in the country they would like to visit. Baekhyun answered that he wants to visit Baguio and bring other members of EXO there because of the fresh air and good environment.

After the concert, EXO-K went to Malaysia and performed with EXO-M for MTV World Live Stage.

VIEW GALLERY: EXCLUSIVE: Behind the scenes at the KPop Republic 2013

The group expressed their excitement to see their fans again during the Kpop Republic concert. Jinri also asked the group which Filipino food would they like to try and what places they would like to visit. Jong Hyun answered that he would love to eat sinigang and visit Cebu or Boracay.

Taemin was asked to describe their Filipino fans in one word and he compared that Filipino Shawols (short for SHINee World, fan club name) to “trees.” Taemin explained that it’s because their fans have been patiently waiting for them to come back and see them perform live.

Meanwhile, Onew is currently doing a Korean sitcom called These Days. The SHINee leader shared that this is his first time to try acting and he is doing his best to “level up” with the actors and actresses on the program.

Lastly, Key’s fashion sense has been praised since their debut. Jinri asked about his style and Key confidently answered, “I think I’m trying to show my identity though my fashion, maybe.”